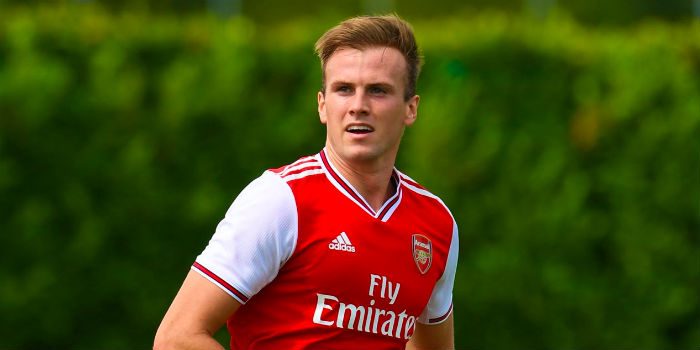 Rob Holding has taken another step towards a first team comeback by getting 90 minutes under his belt for the U23s.

The centre-half played the full game as Steve Bould’s side beat Leicester 2-1 at the Emirates.

Having returned to training during the summer, and now taking a full part in first team sessions, it’s about building up his match fitness after he suffered an ACL rupture last December against Manchester United.

The Gunners have Europa League action this week, with a trip to Frankfurt on Thursday, but it seems most likely he’ll make his first team return in the Carabao Cup against Nottingham Forest on September 24th.

Dinos Mavropanos also took part, playing 67 minutes as he makes his way back from an ongoing, troublesome groin injury.

It was also a good day for young striker Tyreece John-Jules who scored both goals as Arsenal came from behind to win. With Alexandre Lacazette injured, Unai Emery needs another striking option to ensure Pierre-Emerick Aubameyang isn’t overplayed or picks up an injury in a game he doesn’t need to play in.

With Eddie Nketiah on loan, this could open the door for a European start for the 18 year old.

The U23s sit in second place in the Premier League 2 table, level on 11 points with Chelsea, and yet to lose a game so far this season.

I think the other striking option would be Martinelli

Would play Holding and Chambers together in the Europa League group stage. They know each other very well and are very good mates off the field as well. Would have no problem to see them switch with the Sokratis/Sideshow Bob duo around December at the latest and become our first choice defensive pairing. I’m far from convinced that Luiz is a better defender than Mustafi tbh. The fact that he’s able to play good passes doesn’t bother me that much. He’s a defender and not really very good at that.

Luiz is a better player than mustafi. Makes mistakes, but he’s also just settling in and has played 2 games against top 4 and one of the best teams in world football. Definitely needs to improve, but we don’t need to start on him straight away and throw him to the wolves yet, sokratis has made mistakes too and needs consistency, both need to be better. Let’s give it some time though eh?

And while we’re giving him time, we’re dropping valuable points. He’s certainly not as bad as Mustafi, but he is a downgrade on Koscielny.

As I said, he surely is a better player than Mustafi but is he really better at actual defending? I’m not sure.

I would make use of Mustafi in the Europa Group stages and Forest in the Carabao cup, so I’d play Holding and Mustafi at CB, and slot Chambers in at DM for those games. Or we could play them all in a back 3 but I’m not a fan of constantly switching formations.

the dortmund reject Sokratis and the Chelsea reject Luiz are total crap….total crap. Definition of mediocrity.

I don’t agree they’re crap, but they’re certainly not a good partnership. Far too similar. Think back to Koscielny – Mertesacker, that was a complementary duo and our best defence since ’06.

It might be worth trying Luiz out at DM

This is nothing to do with Holding but a few talking points from yesterday around Europe; Elneny was sent off on his Besiktas debut, Monreal scored on his Sociedad debut (against Diego Costa and Keiran Tripper’s Atlético Madrid no less), and Donyell Malen, who we sold to PSV for 540k two years ago, scored all five goals in a 5-0 win.

Who needs online sports sites or sports channels, when we have Richie

God is a Gooner
Reply to  Richie

Richie
Reply to  God is a Gooner

Eddie Nketiah came off the bench to score for Leeds again and was fouled for the penalty as Leeds won 2-0 to go top of the league. I think it’s only a matter of time before he’s starting games for them. We see what Tammy Abraham is doing at Chelsea after a loan in the Championship (hat trick yesterday).

I’m really struggling with this defense.

How many more defenders who have a history of being respectable come to arsenal and capitulate. It is so many now, SO MANY.

This team needs to behave in a different way to protect the defenders a little more than they are right now. Constantly eating through defenders ruining confidence & market value is a good way to consistently drop down the league table….