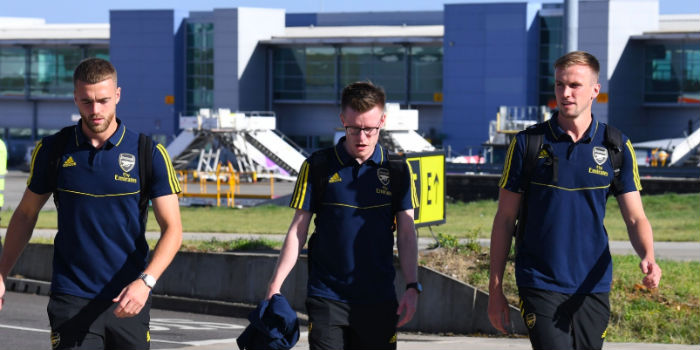 Good news. 288 days since he ruptured his ACL against Manchester United, Rob Holding is in line for a first team return.

Arsenal have confirmed that the defender has travelled with the first team squad for our opening Europa League game of the season against Frankfurt.

The centre-back, 23, has played a number of games for the under-23s since resuming training with the ball in the summer and appears to be ready to take the next step.

It remains to be seen whether Holding is given the responsibility of starting the game – we suspect Calum Chambers and Shkodran Mustafi could get the nod – but it’d be great for his confidence to at least play some part of the occasion.

Unai Emery is set to face the media when Arsenal touch down in Germany.

Give him the start. We can afford him to be rusty in this game

“We can afford him to be rusty in this game”.
No we can’t. That mindest of “its only”…… is part of the reason why the team is so shit, of late.
I do agree that he should start though

He is our only hope to shore up this shambolic defense of ours. And he’s been out for 288 days. He’ll need mins on pitch to get back to his best and this game can provide that.

And I won’t be surprised if Emery starts Papa and mustafi and benches Chambers and Rob.

IN the name of all that is good on this green(ish) earth, please don’t let him start Mustafi and Luiz together!

Good to have Rob back. I think he could be on the subs bench.

What is the fking point of playing anyone if we are afraid of Watford??
First thing we should do is get rid of players with weak mentality. No matter how good you are at playing football, if you are mentally weak and scared, don’t have belief, a fighting spirit, then in my opinion you should not play for a top club and chase top 4 and champions league.
We need players who are strong physicaly and mentally, not these fking garbage paper cup flashy big headed player’s.

That said Holding is a player we need to keep

Xhaka is scared of Watford..
If Holding didn’t concede 2 penalties in 4 games, he is good enough to play

I think you misinterpreted what he said…

Will be interesting to see what our starting CB duo (trio?!) is in a month from now. Also, apologies for making the rest of the comment topic-unrelated, but: as I’m Czech, I watched Slavia Prague take on Inter Milan at San Siro last night. I know Inter haven’t been the world beaters they used to be recently, yet the quality gap between these clubs is – or at least should be – huge. Yet it was not. Slavia players would bite your hand off if you told them it’s gonna end in 1-1 draw beforehand. Yet they left the pitch pissed… Read more »

* ‘they were extremely cohesive defensively’