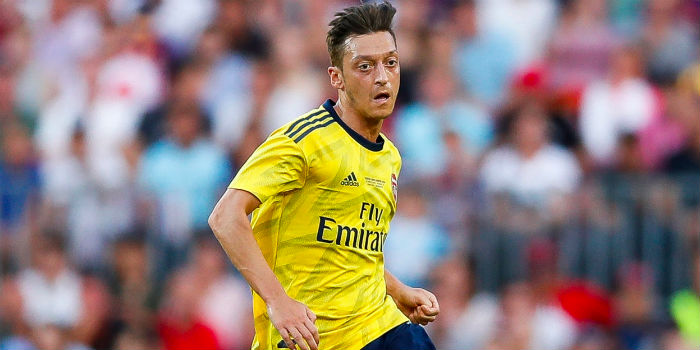 Mesut Ozil has not travelled with the Arsenal squad to Germany for tomorrow’s Europa League clash with Eintracht Frankfurt.

The midfielder, along with Sokratis, have been left behind with Unai Emery set to clarify the reason for their absences at his press conference this evening.

Nevertheless, the Spaniard has taken a strong squad, with both Nicolas Pepe and Pierre-Emerick Aubameyang along to head up the strike force, while Rob Holding is in the squad for the first time since last December.

Of course we left Ozil home, we wouldn’t want our highest paid player get injured in his home country now, Would We..!!

Why talking about “highest” ? He is above all and by far our best (if not only) creator.

Not true at all.

Probably. But to expensive to never play.

So true pity Emery has not found the righr way to use him. Sanchez has never kicked a ball since not having Mesut alongside him. Hes one of the classiest midfielders around– forget making him defend and let him do what hes best at-making goals and winning games

He is too inconsistent

To be fair to him he did say he would only play every fortnight. At least I think that’s what he said. He may not have said ‘every’.

Okay. See what you did there. Now I look stupid.

Its all to weird. Ozil cant do much for this club. But at least play him in a less physical enviroment like the Europa league. Sad stuff indeed. Arsenal most expensive flop ever after the new contract that is. Prior he was ok.

Yeah, he can’t do much for the club because our below average manager never picks him.

Dropping Ozil is one thing Emery is getting right, he’s been on the slide long before Emery showed up

Seem to remember severally, in that game, Ozil falling over with no one bothering him. Looking like he was in the wrong profession. Bar that one pass and some good moments… he was regular shit.

He has the club record for assists in a Dawson

Nah… That is to the King. Mesut couldn’t wipe his boots on Mesut’s best day.

I was hoping Ozil would start this match to get more match sharpness. We’ll see what comes out of the press conference, but there are simply too many head-scratching decisions being made these days at Arsenal.

Resting Ozil for a home masterclass on Sunday against Villa surely

He must have a Frankfurter lodged somewhere it doesn’t belong.

Emery is ruining our club.

Ruined long before he rocked up.!!!!

in reality we need to be playing younger players in the Europa league and leaving our core players at home to rest. However Emery made such a mess of the Watford game with his constant tinkering (why not just play the 4-3-3 it looks like we wanted to earlier in the year) that now it looks like we’re going to play a strong squad instead. We need to find our best 11 – pick a formation and stick with it for a bit (in the league).

Yes. But also we need to win a game you for team spirit.

Nah.. Who am I kidding we need to win before the pundits Start to count the days from our last win you know.
Because believe me they will.
“Like Arsenal haven’t won in a month” without considering that half of it was international break.
So please arsenal just win the game,
Ok..

So he was ok to play against Watford for that long, should have taken him of earlier. Now no Ozil? Wyd is going on. Get rid of they guy if he is going to play 10 games this season.

We can’t get rid of him (wages too high) so effectively he becomes a squad player (unless he starts performing so well consistently that it demands you build a team around him).

So how did Man U manage to get rid of Sanchez for the season ?

Sanchez is not a lazy waster. No one in their right mind would want Ozil.

Personally. Regardless of Oz il saga I just Pray to all football gods that The Auba return unscratched and that Rob Holding went more as an observer than actually playing because that isn’t an easy game regarding his condition you know coming back from a long term injury and all. So player in away unfamiliar tough Europa opponent is ideal. May me he could get same minutes in the upcoming league cup, because I can’t for the life of me imagine going another month with our current centre back option isn’t good for my heart.

This player will go down as Wenger’s greatest misjudgement. Simply the weakest player I have seen play. The weakest.

Also that isn’t true. The weakest really..!
Squillachi, Anyone.

A P
Reply to  Martin Dufosse

So can you stop wearing the replica jersey now, Martin Dufosse?

As for the first 4 years he was ymthe most creative player in the country your comment makes no sense. He helped us win 3 FA Cups and was one of Wenger’s best signings. Yes he has become totally inconsistent but please don’t rewrite history. In fact he had a good first half against Watford. I must admit however I cannot believe he isn’t in the squad for Frankfurt

Most of these Ozil bash’rs are ten to twelve years old who have just started following football. I am assuming 10 because they have a memory of 5 years only. 🙂

He will have to, what are the alternatives, Frankfurt aren’t a walkover, and that is my fear. I didn’t notice this before but out of 8 goals we scored in the League 7 Have been scored by Auba and Laca, due to our lack of creativity and our strikers being incredibly accurate. And one is injured for a month. You imagine the rest.

We really need to be more creative, we don’t even give Auba a chance to miss a sitter.

Who cares? Start 11 kids. This game is unimportant.

Hopefully he starts Martinelli. With Pepe on one side, and one of Nelson or Saka on the other.

Nelson has experience in Germany and needs a better performance than Sunday. I’d like to see Saka get time, I’ve liked what I’ve seen so far from him.

Yep. In front of our midfield diamond cluster(fuck)

I said the other day Ozil wouldn’t travel to Germany, and I got told to give it a rest, but the only person resting is Ozil…..

Quit international football, won’t do away day that are outside the M25, this is ridiculous, he needs minutes, 2 games in 5 days surely isn’t too much for a player who’s played 71 minutes since May?

This kind of comments are so infuriating and lame! You talk as if Ozil is the one who picks the team during match days. The question you need to be asking yourself is why Ozil was almost always available and integral part of Arsene’s team but barely features in that of Emery’s. Emery comes out and tell us the player is sick and every fan is at the player’s back. Why is Ozil always sick under Emery’s management while it wasn’t so under Wenger’s? Is the player faking it or the manager is giving the cat a bad name to… Read more »

He missed alot of away football under wenger too. We were always hearing about a bad back or a illness. The line about ozil not playing North of Watford has been there since wengers days.

I’d like to see the midfield three of Torreira, Willock, and Ceballos.

But I imagine there’ll be a Guendoozie in there instead of one of them.

Emery wouldn’t dare drop Guendouzi. Whatever the fans want, you can guarantee Emery will go against it

How many Guendouzis do we have? ?

Early on I bought the narrative that Mesut didn’t fit Emery’s “style/system” blah blah blah, but as time has gone by I’m thinking this is more an Emery issue than a Mesut one. Mesut still has plenty to offer this team but Emery is leaving him out time and time again. Why’s he being “rest”? He’s played ~70 minutes all season, he actually needs these minutes, even for an hour. I see people writing ozil is finished this or that but is he really? Is Emery not to be seriously looked at for his use, or lack there of of… Read more »

We still don’t have midfield and defensive stability. And by many, including Emery it seems, Ozil’s is the role most deemed at odds with fixing the problem.

He doesn’t want to look to curbing other positions to solve the problem.

Of course leaving Ozil out still has not solved the problem either. But hey, who am I to point that out?

Emery still wants to force Ozil out. A team in the CL that needs a creator in January is Emery’s wet dream. Emery ain’t much of a manager, but he’s a great hatchet man!

maybe his contract has a significant appearances clause.. which means we pay him more if he plays more. That might explain this decision.

Uptil now, they were leaving him out of the team, trying to drive him out like they did with Mkhi and Elneny, but now the transfer window closed, and so he played against Watford.

I’m disappointed that more of our U23 players aren’t travelling. This would have been the perfect game to give the likes of Tolaji Bola (our backup left-back after Monreal’s departure) a debut run out.