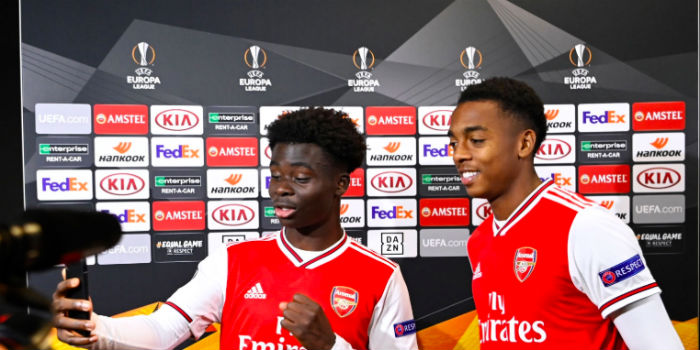 Bukayo Saka says Freddie Ljungberg’s presence has proved vital in helping him acclimatise to life in and around Arsenal’s first team, in part because the Swede is able to clarify, in better English, the instructions of coach Unai Emery.

The 18-year-old winger announced himself on the European stage with a man-of-the-match performance against Eintracht Frankfurt as he opened his Gunners account and made two assists in a 3-0 win.

Having admitted that scoring was a ‘very proud moment’ the teenager went on to thank Ljungberg, who managed him at under-15 and under-23 level before taking on a new role with the senior players this summer.

“It helps so much [having him around],” said Saka. “Sometimes when I don’t understand, when the coach is trying to communicate with me, I have a better communication with Freddie sometimes, he speaks better English.

“Freddie’s information, he’s been a player at this level before, and it’s vital for me because I play in the same position as me and he’s been a big part in my progress.

“He gives a lot of advice to me every day but one of the most, the best piece of advice he’s given me is to stay humble.

“He’s been with me since I was 15, seen me do amazing things but he always tells me to stay humble, keep working hard because he really thinks I can be a top player.”

Saka also revealed that he takes his inspiration from Cristiano Ronaldo.

“I love his mentality,” said the winger. “He always wants to be the best, always working hard on and off the pitch, trying to make his body the best and when he gets on the pitch he performs with full confidence and full personality and shows why he’s one of the best players to ever play football.

So long as he doesn’t whip his shirt off every time he scores, we might be okay with Saka emulating Ronaldo. Just.

this is like the 50th article of Saka today

I really them all

*I read them all

You love to see buku articles on the kid

So now we have it from the horses mouth. They don’t understand what Emery is saying. So we might have a good manager or Is he Manuel from Fawlty Towers in disguise? In fairness I know nothing.

Watching him last night, Emery just needed a baton and he could have been at a Proms concert. Trouble has been that our players can’t all read music!

He’s learning English from a book

looool in fairness, none of us do.

He doesn’t understand Emery sometimes. I wonder if most of the players don’t. I’m pretty sure Mustafi doesn’t.
Keep it up Saka!

Quite telling that he called out Emery’s poor communication skills. No wonder the players are confused.

I play the best position as me too! what a coincidence!

That said, Llungberg has rerally made a difference nurturing the current crop.

We’ve lost a number of great prospects recently in Maalen, Gnabry, Bennacer (not to mention Iwobi)

I think the inclusion of Llungberg in current first team set up was deliberately to continue his work with the young players being promoted into first team like Nelson, Willock, Saka etc.

But you did indeed menton Iwobi…

The ljumberg love is as well going strong as ever. Let’s hope he can achieve the same success as pep cause it’s looking likely he is the nxt manager. Just wondering what pores does

It really would be fantastic to have Ljungberg as a manager at Arsenal.

so freddie has taught saka how to make late runs into the box as well? tick.

Anyway, i got the impression that Emery would have liked Saka to gift Pepe the goal? See his face when Saka scored? Did not know if to scowl or smile in that moment.