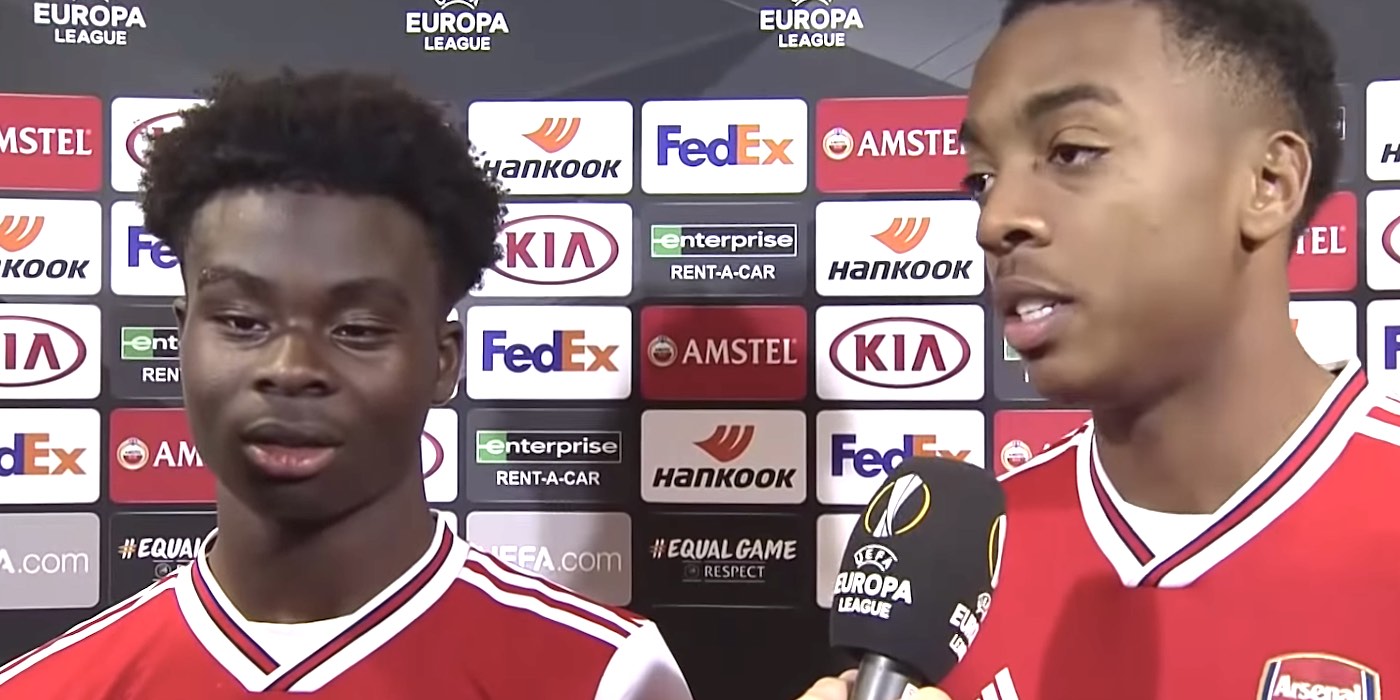 Joe Willock has hailed fellow Academy graduate Bukayo Saka after his outstanding performance in the 3-0 win over Eintracht Frankfurt in the Europa League last night.

The 18 year old, making only his second start for the club, scored a superb goal, and was involved in both the other Arsenal strikes as the Gunners got their European campaign off to a flying start.

Willock opened the scoring himself after good work from Saka down the left, and he was keen to pay tribute to his teammate afterwards.

“He’s a special player, he got two assists and one goal tonight,” said the 20 year old.

“I’m happy to score and contribute to help us win the game. But as a whole I thought we all did well and it’s a big night for us.

“It was a good game for us, a lot of young players came in and we just did what the manager asked and it was a good win. Good clean sheet, we’ll take confidence into the next game.”

Willock was taken off during the second half, having been booked in the 63rd minute, and while he looked a little disconsolate, he had no complaints after the game.

“I always want to play,” he said, “but if the manager brings me off that’s his decision, I have to stick with it and support it.”

If he keeps playing like he did last night, he’ll find himself doing 90 minutes with much more frequency.

The one and only positive of being in the Europa League again is it is an opportunity for the young players like Saka, Smith Rowe and hopefully Martinelli who won’t be getting much time in the league matches to get some quality playing time in meaningful games against good competition. It’s a different level for sure from the Carabao Cup matches against lower tier English sides. As a supporter it also makes the EL matches more interesting when we get to see exciting young talent play alongside some of the veterans. I do wonder what Saka starting and getting to… Read more »

Saka and Nelson have different qualities but to get the start over Nelson seems to indicate Saka is preferred or they are spreading the time. Taking advantage of the time you are given as a youngster or any player for that matter usually results in getting more time. Emery has to be wondering what he can do against PL teams.

If so, I hope he takes his chance well. The previous match didn’t go so well. That was the case for a large number of players, not just Nelson, but Saka is showing him there is serious competition from the academy so nobody is an heir apparent.

Agreed! I do want to see more of Martinelli – he seemed really exciting in pre-season, so hoping he gets a few cup starts to show some more.

I did mention He will need to beef up a little

Thing is last night everybody put in good shift, even xhaka and mustafi and Luiz. I can only wish they played like this every week

Saka needs to be taken in perspective. He showed some inexperience first half and struggled) albeit not as much as Smith-Rowe. BUT he persevered and came good second half. That said, whilst recognising the contributions of the younger crop, it is important not to get carried away. Their success was very much built on some better performances by senior players as well. In particular (UNPOPULAR for some) Granit who led by example on the night. He and Kolasinac came out aggressive second half to help try and assert better pressure on the Germans. Also surprisingly , the pairing of calamity… Read more »

“which, if you listen to AFTV”

Who on earth listens to AFTV???