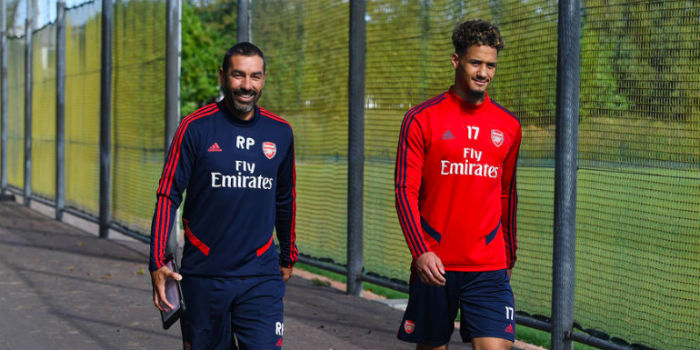 Arsenal have revealed that £27 million summer signing William Saliba is working his way back to fitness at London Colney despite being loaned back to Saint Etienne for the season.

The France under-21 international penned a long-term contract with the Gunners in the summer before he returned to France but has since undergone surgery to fix an adductor issue that bugged him all summer.

Arsenal shared a few pictures of the 18-year-old in training and taking a stroll with Robert Pires.

This time last month he was ruled out for six weeks so he’s presumably closing in on a return to action. It’s interesting that we’ve decided to supervise his recovery and something of a bonus that the player gets some extra time in London to prepare himself for his new life.

I’m glad St. Etienne were open to this, I think it will make him feel more relaxed around the club. Let’s hope for a smooth return from injury.

Not to mention that the rehab and medical facilities at Arsenal are probably up one step from that available at St. Etienne…

Who gave this a thumbs down? Jesus some people are just miserable

Who reckons we could get away with sending back Mustafi with a curly wig on?

Dare to Pepe
Reply to  Goonerink

Or when he slide tackled the air hostess.

It’s worth a try…

Oh mate, I actually laughed. I will admit I feel some empathy towards Mustafi now though. I bloody hope he realizes how lucky he is to get paid so much money to do nothing.

Gotta feel for him yes. Money is nothing when the whole world thinks you’re a clown.

If you think hording money is everything then you have a lot more to go through in life..

There is never anything wrong with that ?

I clicked.
I don’t regret it.

“Saliba returns to Arsenal ahead of Watford game.”

I love that Bobby Pires is always to be seen around the club, but does he actually have an official role ? – (like, apart from being a legend and all).

He has a role…He’s the King of them all…

Why is this article categorised under “Former Players”?
May be because of Pires? 🙂

What is Pires role at the club? Is he hired or just hanging around?

His son, Theo, is in the youth team at Hale end

He feeds the chickens twice a day.

Hopefully just hanging around. Forever.
If he had a role some would find a way to get the knives out, and that would be unacceptable.

Seems like he just likes being in a football environment and appears to be settled in London. And I am sure no one at the club would say no to having Robert Pires coming in whenever he pleases

I thought I read somewhere he was part of the coaching staff?

Better the Devil You Know

Josephat Ngesah
Reply to  Better the Devil You Know

Pires was a great legend,wouldn’t mind him volunteering to help grow the lads…hanging around smells like idle, unwanted…

They tried to make him go to rehab , he said yes, yes , yes.

I’m glad he gets to spend some time with Bobby, I’d fake injuries all the time if that was the pay off.

On a side note, does anyone know exactly what Bobby’s official role is at the club? Does he even have an official role? I don’t think I’ve ever heard anyone say that he is actually employed by the club.

He’s bloody good at it too.