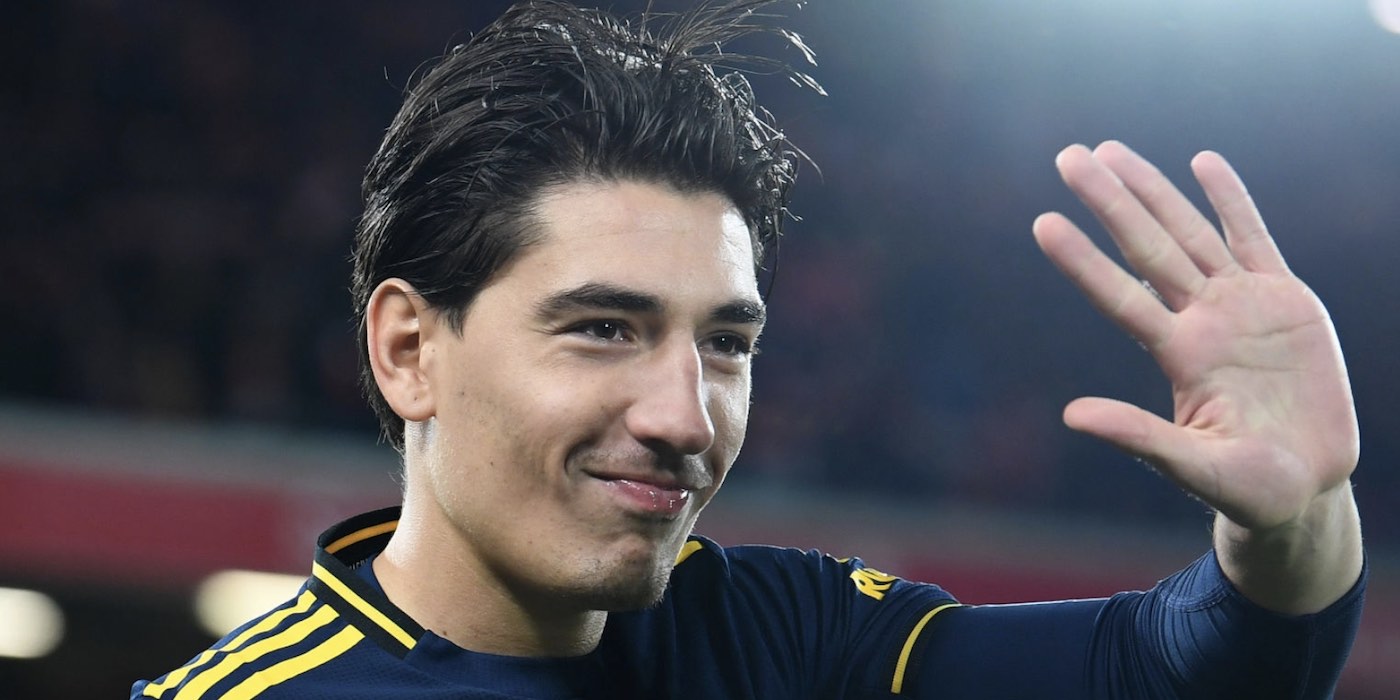 Hector Bellerin says he’s gutted that Arsenal went out of the Carabao Cup to Liverpool last night, and although the team conceded five goals, he was keen to take the positives from the performance.

The main one is that the Gunners scored five goals of their own, and also young players like Gabriel Martinelli, Joe Willock, Ainsley Maitland-Niles and Bukayo Saka all made contributions to the scoreline.

The return of Mesut Ozil gave us more attacking threat and creativity, and afterwards the captain on the night was focusing more on the good things we could take from the 5-5 draw and what was a crazy game.

“There’s not many teams that can say that they’ve done that. Sure, we conceded five, we conceded a penalty and Alex’s goal is one of those things that you just have to sit back and take it because there’s not much you can do about things like this.

“The tempo of the play, the goals, this is football. This is what you play football for, for nights like this.

“Whatever the score, today we’re gutted, but I’m sure there’s going to be nights that go in our favour.

“Loads of negatives as well, but this is part of the way and we’re looking on to the weekend now.”

For more on the game, check out today’s Arseblog

Still no timeframe for Partey’s recovery

Bellerin: I really, really believe the results will come

Great game. Truly entertaining stuff with some Ozil magic and a blinder from Willock. But what stood out for me is the sliding tackle Torreira put in on 18 seconds. Where is that hunger and fight in the league team? On the bench, that’s where. Unai, wake up or pack up.

And yet somehow, we all know that won’t happen

He doesn’t look ready to start in the league yet, but he’s the obvious choice once he’s back up to speed.

Think we should go with Aubameyang or Guendouzi on the weekend.

Maxin In The Shade
Reply to  Jacob

He carries himself as a captain should.

At certain moments of the game you could see him going up to teammates with words of encouragement. Always positive. Always trying to lead by example.

And that’s not to say anything of Hector the human who speaks up about various causes.

He’s a natural choice. And he holds the values the club stands for close to his heart.

So in summary, I love him and want to have his babies

Tapps
Reply to  Maxin In The Shade

Get in the queue. Absolutely idolise the Hec.

Anything to be taken from the fact he insists they aren’t scared? Is it a bit of a callback to what Xhaka said?

Came here to say this! 😀

Stop this sweet talk Bellerin… You guys played shit yesterday…….arsenal scored 5 goals against a very weak defense and a goalkeeper that should still be studying in high school…. But our defense that featured our two left backs(tierney,kolasinac), two right backs(bellerin,maitland niles) and arguably our best defender in Holding conceded 5 goals….i mean FIVE GOALS…..even a burnley second string won’t concede so many goals against such a weak team

Says it all that this comment has so many down votes. We’re overtaking S***s as serial bottlers.

Trust me Steve the fans hate the truth…that’s why we would continue to be shit for a long time…my hope is for the new generation fans(young fans coming up) to take the club forward…..the so called older classy fans have done alot of damage to this club without them knowing

What? Tierney only played 10 minutes, Holding and Bellerin have missed 700 days between them. Their front 5 had far more experience than ours, yet we also scored 5, how do you explain that?

Our entire team, including the bench, was more experienced than theirs. I’m sorry but it’s the truth. Every single one of our players has first team experience this season. Every single one of the players in our team, with the exception of Mustafi and Ozil, sits on the bench or starts for the first team regularly. Who can you say that for from Liverpool’s team outside of the 6 players mentioned.

Truth is, based on the team put out, we should have won that game.

Please call the so called front five that has more experience than our back five(bellerin,holding,mustafi,kolasinac and torriera)

Football is not as binary as Fifa likes you to believe. I agree the defense wasn’t great but my point is that 50% have missed the last year and the other two are our most error prone players. In terms of attack, re-watch the match or just check the xG numbers and tell me Arsenal had a worse performance.

Based on the players we fielded and the overall experience, yes, Arsenal’s performance was worse.

Guendouzi=handbrake last night. Bringing him on for Ozil was such a passive move. I like Matteo as much as the next man but he’s played in every game this season. Ozil was keeping possession and running the show. If he doesn’t play on Saturday there is not excuse.

Agree,
Ozil played yesterday as one of the front three. With three grafting hard running midfielders behind him ( torrential, willick, a.m.n.) who would youvdrop to get ozil in front three , alex l. Or Pepe??forget about him in a midfield three.
Answers pls
I would be tempted if a front three of martinelli, p.e.a. And ozil.

It was a breath of fresh air watching ozil. No disrespect to our other midfielders but after not seeing ozil for a while. You’d now realize how much he helps out retaining possession and controlling the tempo of the game. Allowing the whole team to move along with the ball.

He’s a genius, time slows down when he has the ball.

Arsenal fans get off your high classy horses and dig deep to get this club out of the horrible mess we see ourselves in….. Most of these so called first team players are stealing a living in our club…they are bad example for young players to follow…very soon the likes of martinelli,saka,willock,smith rowe, nketiah and saliba will be infected with this mentality

Saka”s work rate and commitment dropped a notch last night. Or did I imagine that on my own?

5pur2 are still looking for ‘fans’. Our issues are minimal. We have a fabulous youth team, that continues to churn out premier league standard players. We have an excellent scouting system that uncovers jewels like Bellerin and Martinelli. We are a work in progress – and I’m not convinced that this progress will be realised under this coach. How about actually supporting the club?

You’re not scared to play anyone? That’s not what I heard.

Please salute your new captain. Our previous one is MIA. As he was for most of his Arsenal career.

I actually enjoyed yesterdays game greatly. Wasn’t even gutted we lost. It was wildly entertaining, and .. it’s the Carabao. Either way, I’m way past expecting us to do especially well this season, so in some weird way, I feel slighly disconnected. That’s probably bad coming from a guy who’s supported the club since 1983, but.. it’s pretty damned good for my mental health. I enjoyed last night – we were brilliant and shit, glorious and hopeless, and .. it was entertaining. I forgot about all the hate being spewed (here too, sadly), all the ranting comments, all the pitchforks… Read more »

Haha I am quite the opposite. I was expecting to lose but the fact that we had hope of snatching it all the way to the pens was quite heartbreaking

Absolutely spot on OdalGooner! And the only way that we transition this to the Premier League, is to show our undying support – whatever the circumstances. I’m getting so fed up with the neigh sayers. Let’s all learn together – then, when we win the league in 3 or 4 years time, we can all take the credit. The fans will love the players. The players will love the fans. Remember 2004?

Disappointed that we lost – yes indeed, but I kind of presumed that we’d get a thorough drubbing at Anfield. Instead we got a heady game of football, with some of the young starlets showing great potential and spirit. Truly we need a change of direction at Arsenal, but remember, even in the face of defeat, we actually did make a fight out of it, which incidentally is my interpretation of what ‘Ector is trying to express here. Emery is obviously a wrong choice for our beloved team, and we need a change of management desperately. 30th October 2019 will… Read more »

I wish I’d said that!

Natural born captain? Rubbish. He has none of the essential attributes. Has he sat on the half way line in a heroic act of bravery? Has he shown great courage in adversity and stood up to the screaming hordes? Has he walked off at a snail’s pace despite provoking much anger? Has he told countless bullies to “fuck off”? Or looking at the great John Terry, has he abused and laughed at American tourists after 9/11? Has he racially abused black players? Has he parked his car in a disabled bay because he couldn’t be bothered to walk an extra… Read more »

Can anyone summarise Bellerins performances since he came back from injury? I’ve missed all his games. Worried about a loss of pace after such a bad one

Loss of pace not so noticeable. His defending of 1 vs 1 situations still looks abit rusty.

One on one defending has never been one of his greatest assets in football.

Xhaka: We were scared of Watford
Bellerin: We are not scared of Liverpool

But what do I know.

Captain having the balls to address the massive elephant in the room instead of just reiterating the “official state policy”?
Thats a leader in my book, all other things aside.
Going as far as to go “CAN YOU NOT SEE THIS IS NOT WORKING, WHAT THE HELL?” in front of everyone in public, putting your neck out?
That shows passion. He could have just walked off and taken his wages.

Was really pleased to see him, in his role as Captain, step up to take the first penalty. In a team full of youngsters, he took the responsibility despite not being a goalscorer by nature. Class.

Surely with his job on the line. He has to just bite the bullet and start Bellerin, Tierney, torriea, Ozil and a front 3 of pepe, laca, auba this weekend, play front foot attacking football from minute 1.
Atleast we would get enjoyment from watching our team be able to create chances!

I’ll be at the Emirates for the game. Nothing would make me happier than to see what you just described.

Someone should make him captain!

No players are without fault. Bellerin culpable for not spotting Origi for the 5th Liverpool goal and stoppage time equaliser. Also felt we could have used both Bellerin or Tierney on other flank to take the ball down (in conjunction with wingers) to their corner. Instead we either naively tried to go at them 9and lose the ball) or simply lumped the ball long and back to them. Much of this IMO a symptom of our under functioning midfield. We simply have not found the right level of understanding. We had Cebellos, GUendouzi, Willock on the field late on but… Read more »

As far as captaincy is concern. Granit is the captain. Better for the gaffer to decide on one principal and let him fall on his own sword. This 5 captains no captain deal is bullshit. I think we have Granit and Sokratis principally they need to be used by the gaffer to communicate and control particularly in set piece defending. We have not got set piece defending right and our reliance on zonal nothing new with other teams but clearly needs some nuance . why Torreira is tasked to mark tall players for corners should be highly questioned. The other… Read more »