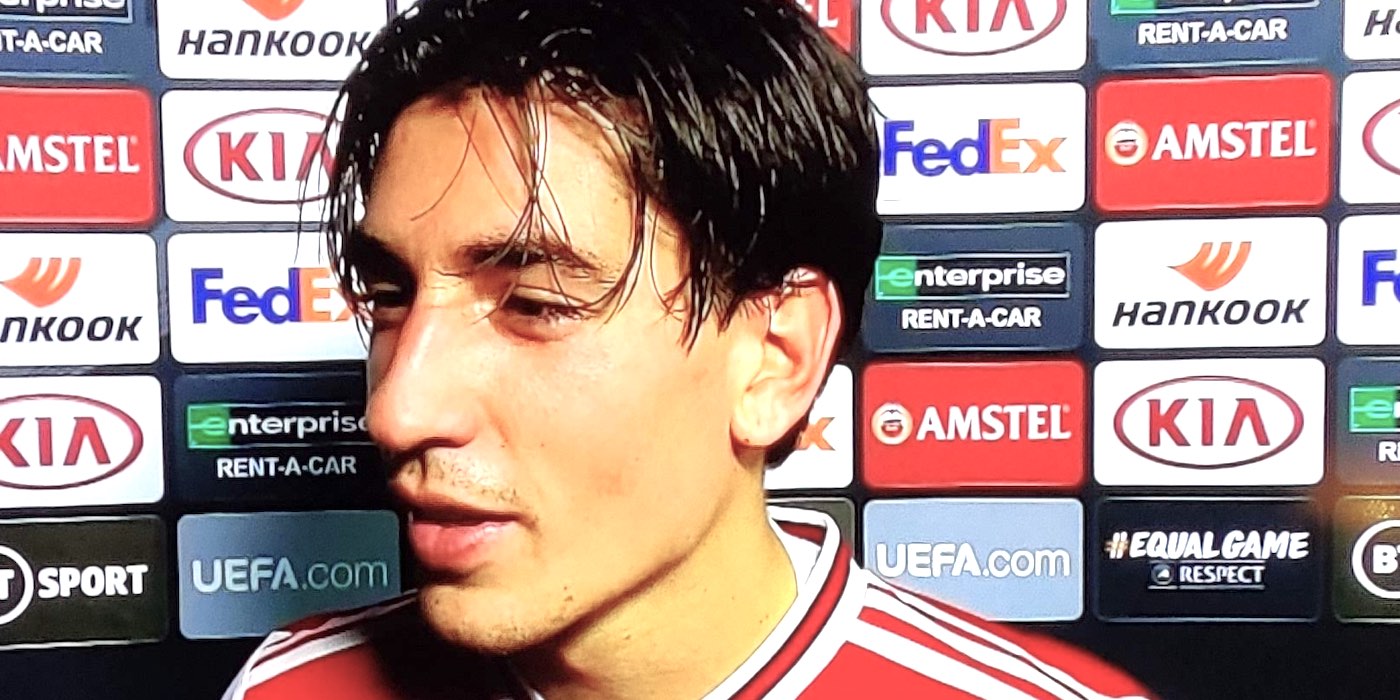 Hector Bellerin spoke to BT Sport after tonight’s 4-0 win over Standard Liege in the Europa League.

Two goals from Gabriel Martinelli set the Gunners on their way, followed by strikes from Joe Willock and Dani Ceballos. This is what the captain on the night had to say.

I think the team had a great performance. We came from beating Nottingham Forest at home which was an important win for us, and we had great character. The team always wanted more goals – the best way to show respect is to always play at 100% and we wanted to emulate that style of play, that pressing, even at 4-0.

You can see that the team is hungry, the team wants to win, and improve. And I’m very happy for the boys, aside from the technical ability everybody put up a great fight.

He’s been a player since he came into the team who has kept his head down, listened to the coaches and worked hard. It shows on the pitch, he’s doing what the coach is asking him to do which is the most important thing.

He’s still very young, I’m sure there’s still a lot to come from him, and everyone is really happy for him in that he’s scoring goals and the way he’s helping the team.

On his first start after his injury

Well, it’s one of the best feelings for anyone who has been injured, they know how hard it is. The process has made me more mature, it’s made me a better player and a better human, and I’m very happy to make my comeback.

I’m so grateful to the physios and coaches, my family and friends who have been around me helping me, it’s made it that little bit easier and hopefully I get to enjoy my football.

Glad to have him back! He and Tierney (massive game from him again) will be really important for us.

Also, Hats off to Martinelli, bright future ahead for him!

9 goals and two clean sheets for my last two games at the Emirates. If I don’t see more of these kids playing on Sunday it will be a great shame. Played with passion and energy the entire game.

I think you’ll see Saka and Willock on Sunday. Hector’s not ready, they’re bringing Tierney along softly after injury. Nelson and Martinelli may be on the bench. Agree with your thinking.

Martinelli has that wow factor that most players who later become world class have.
I remember Ronaldo at 18 in circa ’04;
Messi at 18 in ’05; Neymar at 18 in ’10;
Kylian Mbappe at 18 in ’17.
I think we have a world class player on our hands. A little patience is required but I am glad the lad is in good hands in Edu.

No pressure then! Haha… He does seem to have that emerging glimmer of greatness.

Maybe I’m over optimistic but there seems to be an ’emerging glimmer of greatness’ for the whole team. It’s been a few years coming but feels like we have a crop of young talent that could rival Utd class of 92. One club players in the mould of Scholes, Giggs, Neville etc. are few and far between; it’s not hard to imagine Wilock, Saka and hopefully Hector being talked about as legends of even greater (they’re arsenal players after all) stature.

@PeteyB. And won’t that be a fairy tale end. I believe we have our own class of ’92 and Unai might just be our Ferguson. It’s not a sin to hope. Hmmmm….

I don’t really think Unai drinks *that* much…

Jack but
Reply to  OdalGooner

You mean Unai can’t chew that much?

So pleased about tonight’s game, the performance, the result.

So many youngsters banging on the door, the experienced players will have to be on the watch out.

The only one not quite taking his chance seems to be AMN. Clearly a talented youngster. Has been doing well enough as injury cover, despite the steep leaning curve. The problem seems to be, he has it in him to be one of those players, who play the game at their own pace. However, he seems to be in danger of slipping into one of the players who are careless.

Great to see the injured players back in action and the youngsters. Very enjoyable game to watch the team looked well balanced and hungry.

Great/clinical performance from the boys, a standard siege!

I adore this man

Takeaways from last night: Liege were dogshit. There were some players (#40 I’m looking at you here) that I would be embarrassed playing with in my Sunday League team. That out of the way, Hector, Tierney and Holding (if they’re fit enough) all need to start on Sunday. No question. Maybe (and whisper it quietly) with Mustafi too, but I’m not sure I’m 100% ready for that. Torreira MUST start in the middle in front of the defence. If you need to shoehorn Xhaka in then he should play in either a two man midfield (with a number 10 in… Read more »

Love Hector, has something of the Wenger class. Maybe the last one in this club..

This is so true!

Hector Bellerin: I don’t hate Tottenham because they told me to hate them. I hate them because I love Arsenal.