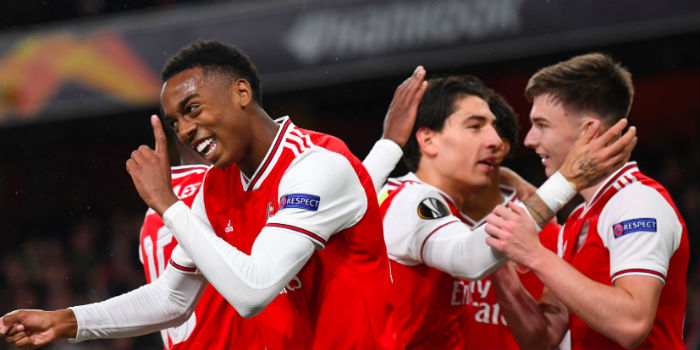 Joe Willock says he wants to keep adding goals to his game after netting his third of the season to help Arsenal to an easy 4-0 win against Standard Liege.

The 20-year-old midfielder showed a poacher’s instinct to convert on 22 minutes, converting with his right-foot after a Reiss Nelson shot was deflected into his path.

An early brace from Gabriel Martinelli and a second half strike from Dani Ceballos ensured it was a happy night for the Gunners who now top Europa League Group F with a three point cushion.

After the game, Willock admitted he was excited by the regular football coming his way and made clear there’s more to come.

He told BT Sport: “That’s one of my targets, to add goals into my game, so I am happy to have done that, but also happy to get the win and happy for the clean sheet.

“The manager got into us [at half time] to keep going even if it’s 3-0 or 4-0 and we knew we had targets, we had to keep pressing and keep trying to win the ball back even when we’ve scored a lot of goals.

“That’s what he drills into us and that’s what we try to do.”

He added: “It’s very exciting because we know we have a manager that wants to play youngsters, he wants to give us chances. So we have to take every opportunity that comes and try to work hard and make a difference.”

Willock: ‘Vocal’ Chambers one of four Gunners to help me settle

Should start more EPL matches. We need a mobile 3-man midfield to run the show in the premier league and provide chances for our attackers

He has a fantastic engine, wonderful skillset and a great ability to flow quickly over the field and a good eye for goal. He’ll contribute more over the next two years. A ready replacement for Ramsey.

Exactly. Kid is impressive and has all the attributes to be the next Ramsey BUT with some actual positional discipline and playing the ball quickly…oh and without the backheels 🙂

The kid has some very intelligent runs and getting into scoring positions, you know Ramsey like.
Like that chip he missed it’s not easy to make that run from deep into the midfield, none of our Midfielders makes that Bust run into the box, and we see it every game he plays, the difference is he misses those chances.
So if he can get his scoring Boots on, why not I can get by him giving me 15+ goals this season, he is on 4 now.

Give him time… Remember how much fans were frustrated with Ramsey, when he was missing them?

Tunde Kalejaiye is that you?

Willock pays credit to Emery for drilling them to play like this.

So, how come Emery has got 2 of his teams playing so differently from each other? I understand the level of opposition are different but even the experience and calibre of the senior team is higher to play this way against the PL teams? Certainly we shouldn’t be struggling against the likes of Watford and Aston villa atleast?

Many reasons, one is that the core of our B team comes from our academy where they have built good cohesion between them, know the clubs style of play. 1st team is more built in Emery’s image.. experimenting every week, not letting them settle, not building on field partnerships – no cohesion, no automatic. Always relying on individual players to make a difference. Not very sustainable..

Nonsense, only willock, nelson, Martinez, Niles and bellerin from that B team 11 came from the academy… Other factors involved that I won’t discuss

Project youth is so refreshing.
I’m actually enjoying the Thursday footie. Emery is rightly taking a kicking for the poor performance of the A team. But I feel happy to congratulate him on his B team and the overall use of the youngster players.
We have an exciting bunch of young hungry players developing which makes our summer clear out look like fantastic work. These young guys will own the team soon enough.

I loved the post script to this interview too, when the interviewer said something like “Well, you’re certainly doing that [making a difference]” and Willock just looked genuinely chuffed and said “Thank you.” A little thing, I know, but I thought it showed a humility that too often appears lacking these days.

That bodes well for the future!

The way Joe drives forward with his powerful dribbling reminds me of Yaya Toure. I love this young man.

It’s very different the teams in the cups Vs premier leagu the type of football is probably more where Emery wants to go with the senior players in the cup games. However they just don’t fit. Being too specialist a player just doesn’t work anymore at arsenal.

You need to be the full package but that will take time. I like what emery is doing with the young guns