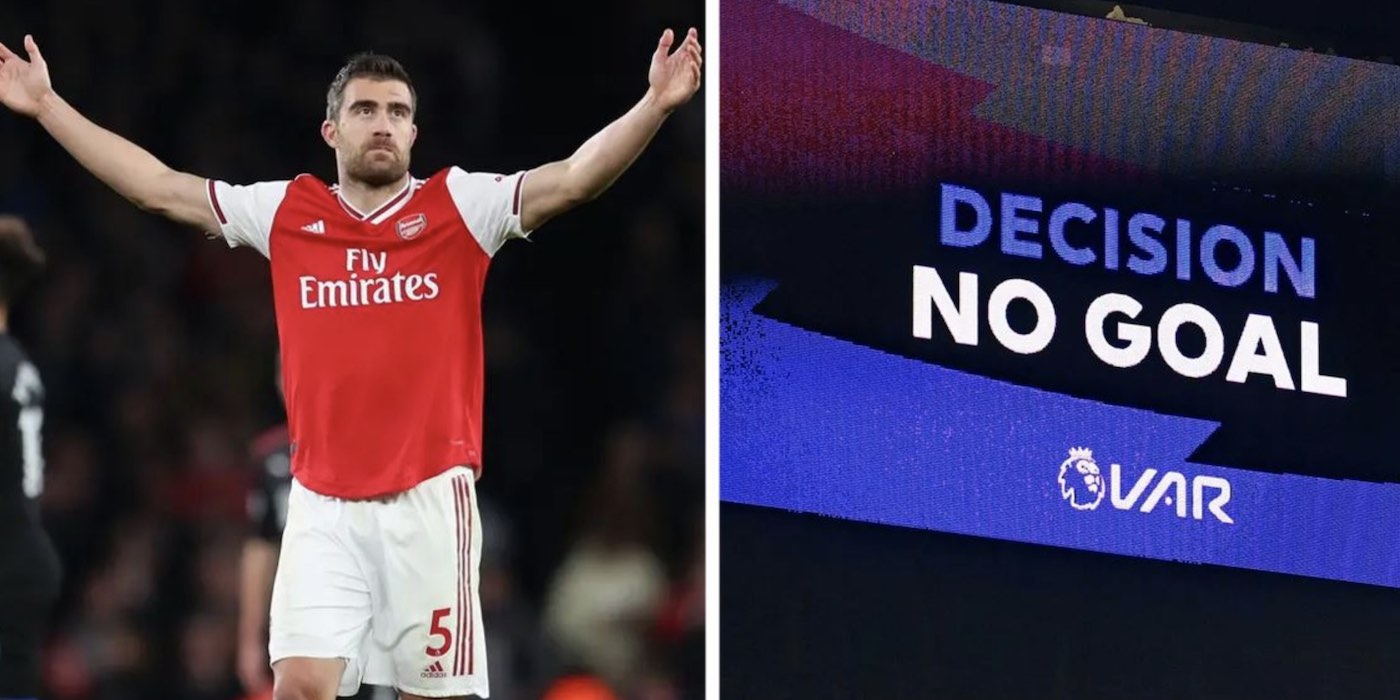 Sokratis thought he’d scored the winning goal, but after a VAR check by an official who had never refereed a Premier League game, the strike was ruled out and the game finished in a 2-2 draw.

The decision was made based on a supposed foul by Calum Chambers which didn’t exist, and at a briefing Riley said that incident, along with three others, were mistakes and that significant improvements needed to be made.

“We’re far from perfect,” said the man whose ineptitude as an official and administrator is now legendary.

“We’ve got improve the way that we do things. There are significant things we can do to improve. We can get better consistency of decision making as VARs.

“We can improve the timing so we have that minimum interference and if we achieve those, which we will over time, then what we will end up with is better quality decision making, better than 91% and actually in a way that minimizes disruption to the game.”

The four incidents deemed incorrect were:

– Daniel James earning a penalty for Manchester United at Norwich

There have been others in recent times which have defied belief too, but clearly admitting to four mistakes is as far as they want to go.

He also urged people not to dwell on their incompetence, but to look ahead to see how they can be a bit less shit in future.

“Let’s not look back at what might have happened so far,” said Riley.

“Let’s take all those learnings and go, ‘How do we improve the system going forward?’ because we’ve all got a stake in making sure that happens.”

What a colossal wanker.

Arteta: VAR will get to where we want it to be

Emery frustrated at misuse of VAR

Emery: Xhaka was wrong to react

As much as I dislike the guy, I’m still going to be naive. I believe that recognizing that you’ve made mistakes has to be the first step towards making improvements. Here’s hoping.

Sorry, but with Mike as their head, I don’t share in your optimism.

I have an idea, maybe get refs that aren’t incompetent and cheats? Maybe that might be a good idea. Maybe hold those cheats accountable for their mistakes? That disallowed goal against palace in the last minute comes down to either incompetence at the highest level or cheating. There’s no way anyone who knows anything about football is disallowing that goal. It’s either a goal or a penalty. Fuck English refs.

Why can’t they reverse the decision knowing that they were wrong. These points can change the position of the league.

I believe this is the first time in the history of the league that referees have owned up to something.

I agree and we all really need to move forward together on this. Only improving
our togetherness together can we make VAR better.

That happens to our workplace. We get sacked.

Although I get what you are saying, the Sokratis one was so blindingly obvious that there was no foul, it is really hard to be positive.

If I was around him, I too would, like Hatchet Harry, grab the nearest thing to hand, which just might happen to be a 15 inch black rubber cock, and proceeded to beat poor old Riley, the rubber cock that he is, to death with. And that might be seen as a nice way to go.

@ Tommmy exactly. And he actually wants us to conveniently forget and look forward (as if those things and more never happened). Corrupt dick head!

This. Time to wake up and smell the coffee.

The decision was beyond a little bit odd, they took an age to reach the decision, and there was nothing there that came close to resembling an infringement.

The guy who drew that conclusion should never be selected to work at this level again, there’s only two real explanations for decision making like that:
1. Corruption/Bias
2. Stupidity

Sokratis should also have conceded a penalty for handball. So it does even out. Riley is still a colossal bellend though.

Nonsense. The only foul in this passage of play as on Chambers when the ball came in. Furthermore, every incident is independent. Conflating incidents with opposing outcomes is just wrong.

Accepting faults is the first step to redemption. Not gonna mock him, when the guy is clearly going out here on a limb.

Yeah but he sounds just like Emery doesn’t he?

And there we have it as the meek continue to believe they will inherit the earth while being fucked over time after time.

He’s not being meek, he is choosing a perspective on a situation that can be received in many legitimate ways. Stop barking.

Medicine after death. He’s lucky that it’s no longer the “Wild Wild West” days, or the fart would have hit the boiling pot by now. They are all corrupt starting from the head. I don’t believe anything he said about improvement going forward. Actually, I won’t be surprised if the reverse becomes the case.

I have no words to describe Mike Riley… *reads Colossal Wanker* hmm actually, there it is

So, can we have our points back?

It does amaze me how many VAR reviews in the PL this season have led to the wrong decision being made. I suppose any hopes that it would improve standards were pretty naive, given the ineptitude of most of our officials atm.

Also, does anyone know why tf we have the pitch-side monitors just sat there collecting dust every game? Seems beyond ridiculous not to use them.

As long as Mike Riley is involved in football, Arsenal will get fucked. How has this man even got a top job, with his performances as a referee

All decisions that can lead to a goal, penalty or sending off should be reviews by the match official on the monitor. It’s pretty simple isn’t it?

It seems to me that if they have admitted that four mistakes were made, they should be overturned. the Arsenal goal should stand and if goals resulted from the three penalties, then these should be chalked off. No point in having VAR otherwise.

But, hey guys, at least he nearly said sorry . . . maybe we can get one of those two points we lost awarded back to us as well !!!

FFS !!!! It would have been better for him not to remind us ( all of the teams affected ) of what happened and just keep his stupid head down.

Exactly. This is up there in the pantheon of non apologies…..”I am deeply sorry if anyone was offended despite the fact that I did no wrong….” bullshit.

The world’s fucked my friends, like serious shit man. But hey “lets not look back”

They are really going to parade that bullshit 91% figure as if it means anything? I guess VAR is so awful that they need to resort to some egregious selection bias to make up a good number in justification of this farce. In conclusion, Mike Riley is a dipshit.

Ah, we are so shit now even Riley takes pity on us!

can we have our two points back please?

No one needs Mike ‘ManU’ Riley to tell the world that Sokratis’ winner against Crystal Palace was a perfectly good goal.

How do you improve the system going forward ? Eye transplants for the officials ? How one can make so many “mistakes” while looking at slow motion replays of an incident multiple times is beyond belief

Mike riely, was a stop start ref…absolute toss pot… In the big games, never let the game flow…especially when arsenal and Manchester United played…you knew tackles was going to be part of the game, when you had Keane and veira…and he’s had of football var…he’ll blow his whistle if u farted quietly