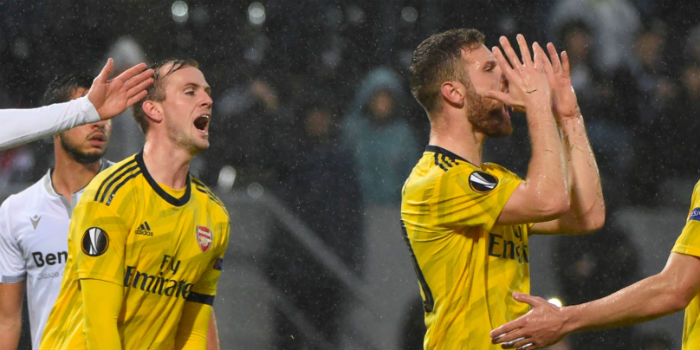 Shkodran Mustafi thought he’d grabbed a winner for Arsenal against Vitoria when he headed home our sole shot on target with 10 minutes remaining only for the home side to grab an equaliser a minute into stoppage time.

The Gunners remain top of Europa League Group F but a fourth consecutive game failing to hold onto a lead marks, coupled with our lack of creativity up front, makes for a worrying trend.

After the 1-1 draw, the German admitted that Arsenal need to be more calm, intelligent and efficient on the ball.

“I think we had a lot of possession and we controlled the game, but then we let them come back at us on the counter-attack through some sloppy passing,” he told Arsenal.com.

“In the second half, we came out better, had better passing and were playing forward a lot more. I think we need to stay calmer in the final third to finish our chances off.

“We managed to not concede before we scored, but then, unfortunately, they got an equaliser. We could have dealt with it better but in the end we have to accept the draw.”

Asked about Arsenal’s inability to close out the game, Mustafi seemed to accept that the Gunners lost control in the final stages.

He reflected: “I would love for them to not have scored in the 90th minute, but when you score a goal and still have time to play against a team like the one we played, they throw everything up front.

“Sometimes it’s not organised any more, they throw a lot of bodies in the box, they keep crossing. We could have done better but in the end we have to accept it and take the point with us.

“I think we could have dealt a little better with it instead of letting them cross into the box again. In the end, you have to accept it, move forward and take the positive things into the next game.”

They often looked isolated as the midfield vacated the centre of the park to pick the ball up deep and feed Kieran Tierney and Ainsley Maitland-Niles, deployed for the first time this season as wing-backs in a 3-5-2 system.

The players looked unfamiliar with what they were supposed to be doing. Mustafi admitted that the attack looked disjointed.

“We didn’t play the first half as we wanted and in the second half we were better with our rhythm and passing, but no we just need to stay calm,” he said.

“Everyone wants to show a lot and give everything but sometimes when you are overly motivated, it’s difficult to play your game.

“We just need to play our game, stay calm and then in the final third try to be a bit more intelligent and efficient in our passing.”

I am not his biggest fan, but I give him an A+ for effort and not telling the fans to fk off. Respect…

At this rate there’ll be no fans left to abuse the players.

… or to be abused by players

i thought his ‘cupping ear’ celebration was a nod to Xhaka and a subtle way to tell the fans to fuck off..

Mustafi is so much more understandable than Emery.

If it were any calmer I’d have slept!

I actually fell asleep at half time and woke up in the morning. This is the first time this has ever happened to me. 🙁

Funny that once again it was better once Ceballos was not on.

Football is unpredictable, but it would be a very strange result if we won on Saturday.

If Emery gets the boot Monday? I hope we have a well thought out solution….

I just don’t see the club paying Emery and his staff payouts, and then paying compensation to tax an employed manager of any substance.

An Arteta + Alonso combo would probably be my pick at this point, but whoever takes over? I don’t see much changing

As if moaninho would be cheap… Arsene? Really?

Mourinho wouldn’t cost any money in terms of compensation. Arsene is available, so wouldn’t cost any compensation. Rodgers has a 32 months left on a £5mill a year contract,he wouldn’t be cheap…. Sacking Emery and staff will likely cost us around £10million It’s all well and good saying sack Emery…. but we have to be aware of the way we function as a club from an economic standpoint. If we sack Emery? It has to be a calculated gamble Arteta + Alonso would be a punt, but maybe an inexpensive one in comparison to other options. Mourinho until the end… Read more »

So Arsene, we gave you your 2 year detention, you can come back now… As long as you’ve learned your lessons Ok? This team needs discipline and if teams work out your tactics you have to change, ok? OK? Good, welcome back.

Well, Emery has the advantage that other teams can almost never work out his tactics. Unfortunately, neither can his players.

I know it might not be accepted so well, but I can’t wait for this guy to be somewhere else. Don’t want him near the team or to listen anything he has to say. Cost us too many points.

Along with Xhaka and Emery. All deadwood and need to leave.

I know it might not be accepted so well, but i cant wait for fans like you stop being shit fans. Not to wonder the Emirates sounds more and more hostile every passing week. Mustafi knows the club wants him away, he knows he is very unpopular among the fans, but he does his best every time he plays. He was our best player today, so why not start picking on Holding who had really bad game, if it is so importent for you to pick on our players?

Jarlov, why am I a shit fan? I’ve seen enough of him to know he is done at Arsenal for me. Him being here irritates me as if he was a serious about his career, and seeing that he is not wanted here both from the fans and the manager, he would have gone on loan at least to get his credibility back. Look at Smalling, he went to Roma on loan and resurrected his career. Niw they want to pay 15m for him. Even if he gives his best as you say, it is not enough. He lacks composure… Read more »

I guess you and the rest of our way to many fans who boos our own players, became fans during the early Wenger area? Can we not just support and try to build our players confidence? Instead of all this displeasure against them?. Imagine being not wanted and having the fans against you every time you play. What is left of his confidence? My point is. As long as you play for Arsenal, you should be supported by the fans. The game yesterday was terrible. Why? Wrong formation, wrong tactics, and players on their way of losing their last bit… Read more »

A Different George
Reply to  jarlov

I did not see yesterday’s match, but I am very worried if you are right about Holding, because he has been very poor the past several matches. Misjudged high balls several times, and has been easily turned by less than world-class forwards. Hoping it is just a lack of match sharpness.

100% agree. It’s not just these two being bang average, they both look to blame anyone else when they do make mistakes.

Pay no attention to Mr. Self Righteous down there and his 7 man band. Probably Millenials anyway.

Grow the heck up!

I’m not wanting to single out Mustafi here, but “in the end we have to accept it” seems to be part of the problem. Why do we have to “accept” rank mediocrity and the inevitability that we will always concede equalisers? Emery’s last few post-match interviews have been the same, i.e. “they pushed and they scored”, like night follows day. It is all of your jobs to stop accepting this as an inevitability and do something about it, for fuck’s sake!

A Different George
Reply to  Hi-brid

I think he was saying, in a more diplomatic way, what we all think: we did not play well enough to assure us of winning and we have to accept that, over time, if we play badly, the results will reflect that.

I said it before, fans tend to want to scapegoat certain players ignoring their better value and amplifying their faults. We saw that with Flamini. When Coquelin (by popular consensus) returned, he and Ramsey conspired to let in 14 goals in 7 straight matches that season. We saw it with Mustafi. Sure he has a lot of faults but he was always strong for us in the air and was an outlet putting long balls out from the back (if you listen to the media, you’d think this was a new capability with Luiz) We then saw it with Granit.… Read more »

As has been true for a long time, some of your insights about players are valuable. Perhaps if you cut out the stuff about how everyone else is gullible and lazy and stupid, your posts would be treated more seriously.

We need a new manager. It may not work but it needs to be given a go.

Like we’re going to listen to you, 1 you can’t even do your own job properly and 2 you should of been sold years ago,, thank you.

Rubbish, you need to get up off your backside and strive! It’s like watching the Sunday team.

Got to respect this guy’s character whatever you think of his ability.

“Everyone wants to show a lot and give everything but sometimes when you are overly motivated, it’s difficult to play your game”

Honestly, “overly motivated” is not what it looked like today. Watching us impotently pass in a U shape, carefully avoiding all the dangerous attacking areas of the pitch, had me begging for the sweet release of death until finally the ref blew his while after what seemed to be an inhumane amount of stoppage time.

Did people not see him cup his hand to his ear à la Xhaka after he scored? We saw it in the stadium, did this not make it to TV?

It could be seen (not in close view though), however, one couldn’t see on TV if the gesture was made to the away section or to home fans.

A Different George
Reply to  Meh

Oh for God’s sake–“a la Xhaka.” Really? Have you not seen a hundred goal scorers do that, especially away?

Mustafi has come out of all of this likeable and with genuine respect for his professionalism. I’d love to see him do well somewhere more at his level. But in this game, he was one of the few remotely willing let alone able to make an incisive pass. And his goal was well taken. Easy enough they say when you’re unmarked, but you still have to tuck it away and he did it well.

I think he’s taking the mickey out of the manager, we need to be calmer……………..

I’m not one for knee-jerk reactions, not to players nor (especially) managers. I wasn’t ever on the Wenger-out wagon and have been a voice for patience as regards Emery. That said, I have slowly reached the tipping point – and become incensed by what this small-minded, narrow-visioned, incommunicative (except his enviable vocabulary of platitudes and cliches), indecisive and frankly, cowardly man has done to our club in less than 2 seasons. Yes – he inherited a fragmented team with some deadwood. Yes, he needed time to first, undo the last year or two of Arsene and then refashion our style… Read more »