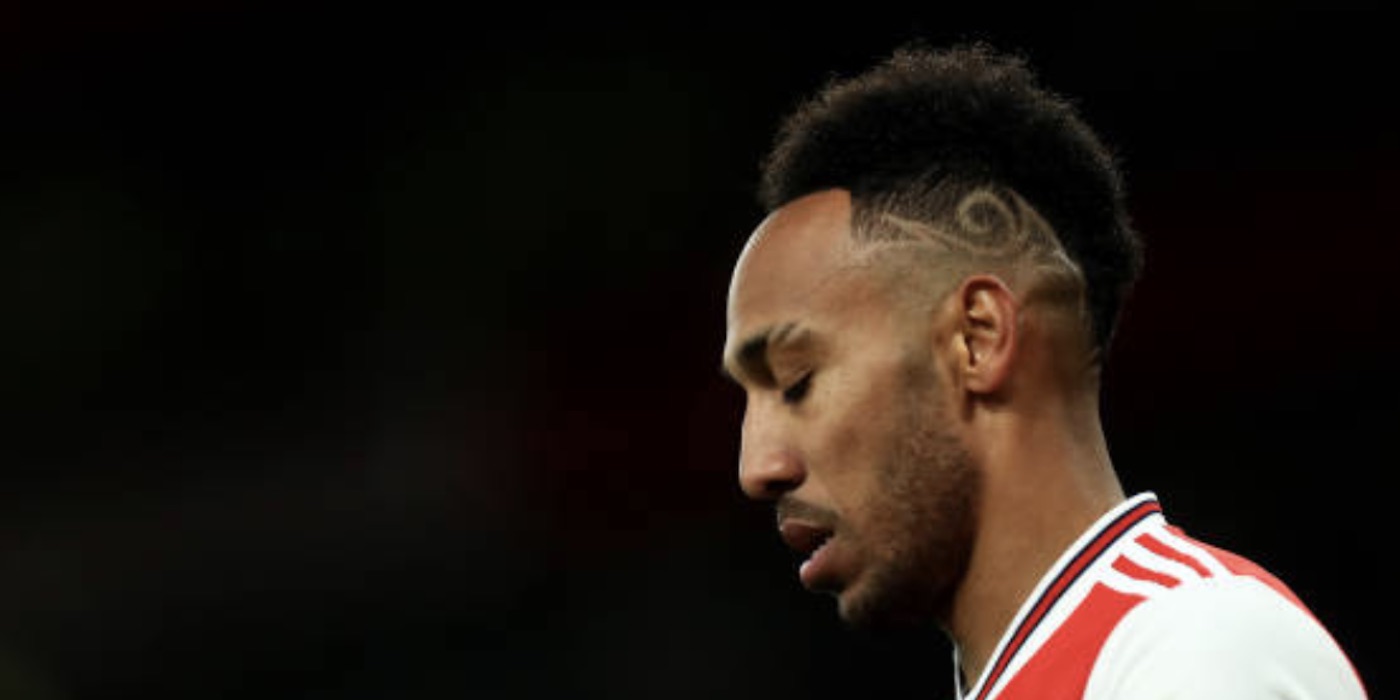 According to a report in The Times (£), Pierre-Emerick Aubameyang has put contract talks with Arsenal on hold due to worries about the club’s competitiveness, and the fact that qualifying for the Champions League next season already looks like a slim possibility.

The 30 year old does not want to spend another season playing outside of Europe’s prestige competition, and with the Gunners lying 8th in the table having won just four their thirteen Premier League games this season, there are concerns about where we might finish and the direction of the club right now.

With head coach Unai Emery under huge pressure, there’s another layer of uncertainty, with the top scorer and captain unwilling to commit his future until the appointment of a new man.

Aubameyang has scored nine goals this season, eight in the Premier League and one in the Europa League, but he has just one in last seven appearances as Arsenal go through a period of dismal form.

The last domestic triumph came on October 6th, a 1-0 victory over Bournemouth at the Emirates, while you have to back over a month for the last win in all competitions, the 3-2 win over Vitoria on October 24th.

There have also been reports that Barcelona are keeping an eye on the Aubameyang situation, and should Arsenal fail to qualify for the Champions League and their interest is real, the club would have little choice but to cash in next summer.

It’ll be fine. I’m sure Emery will just have a very positive conversation with him, and we’ll move the contract discussions on from this process into another.

Maybe show him a video, too.

He and Auba would take a vote on it. Reach an impasse. And Auba will neither sign nor not sign, remaining at the club and playing for free ??

at arsenal he’s the captain of captains. dont know what more aubameyang or any top footballer could ask for!

There goes another captain. What’s that, 3 in 6 months?

Fuck me, I haven’t felt this moderated since I took my a levels.

Can I have some more paper please?

Every post of mine is moderated. No idea why.

He hasn’t gone yet. If we could bring in a top manager like Allegri the chances are he would stay

unai emery – the slayer of captains

Cannot blame the man. As things stand, he’s wasting precious years towards the end of his career.

We waited for so long for a striker of his quality, then when we get him we do this.

It’s like getting a Ferrari and then wearing muddy wellies in it.

Off you trot, Emery.

I bought a Lamborghini once,Don – turned out to be one of their tractors. Matched my muddy wellies perfectly!! Unai seems to be rather like some muddy wellies to me- ones that are a bit too small at that.

absolutely. Let’s hope this talk will put some pressure on those above to make a call. It’s been quite clear for some time that he and Laca will have no motivation to sign on in the current climate, but its maybe easy for the owners to ignore worst case scenarios so long as they remain hypothetical… but it seems worst case scenarios (or close to) are soon to become reality. Hopefully KSE also cotton onto the fact that this is not an American sport franchise where a poor season can be made up for by a favourable draft. A few… Read more »

Joint golden boot winner in a sh*t team as well. But of course non better than our club to waste away his talents.

Quick show him a video, Unai

It’s the start of the rot

The start? We’ve been rotting for years!

C’mon. We were not rotting before this. We were decaying

Inevitable really, can see Lacazette doing the same. I’m just hoping that this and a relatively empty stadium tomorrow will give the board the jolt it needs.

It shouldn’t need to come to this for them to realize.
Knowing these ba$tardz, they will be seeing dollar signs in their eyes with the potential sales of Auba, Laca and then promote martinelli as striker.

24h binge watching Stutgart highlights will sort him out.

This club is so messed up its past painfull. We will not qualify for champions league no matter who comes in. The board will not act quick enough for us to recover. We are in danger of losing some of our best players whilst others get more and more disgruntled. The apathy in the squad is allowed to fester and we lose some of the best years of our better players while we pander to poor players that are not and never will be good enough for the club. A shambles of our own making. Our recruitment has been piss… Read more »

Will KSE ever leave? It is a cash cow for them which just carries on giving irregardless of how bad the football is. Just don’t understand why Kroenke was allowed to buy out the club, when he clearly does not give a flying fig about winning anything. A football club should be owned by the fans like at Bayern, and not some suit looking at his balance sheet.

I just don’t get it.

What indication does management have that this will miraculously turn around and Emery will prove them right?

There’s nothing that shows that this will improve. Certainly not to the level required for Arsenal.

And now we’re gonna allow our best striker, and captain leave because we can’t be proactive enough to make the decision that’s staring everyone in the face??!!

The captain has spoken. #HasHeGoneyet

Can anyone blame him?
We have a board who don’t appear to have any interest and a Management ‘committee’ suffering from inertia. The sad truth is, its now almost too late to turn the tide and by the time they do wake up and remove Emery, top 4 will be a very distant dream..
That being said, Aubameyang, Lacazette and Torreira may be long gone….

Removing Emery may cost £4/5m but playing in the CL and getting through a round or 2 more than pays for that and more….

Don’t blame him. Expect the same from Lacca too.
Don Raul my arse, it’s sad because the type of future we’re facing means we’re gonna need someone more like Mislintat than ever before.

Sigh, time to just hope that Eddie can comeback and do a Kane for us.

The reality is that if we won’t sign? Then we’ll have to sell.

Not sure I trust Raul + Edu to get it right, if you take Aubameyang’s goals out of the team, we’d be in big trouble.

Wouldn’t be surprised if we sold Lacazette as well…..

With Xhaka + Torreira looking for moves, our high turnover of staff looks set to continue.

Here we go again. Although i feel barca would be a bad choice for auba.

So, after a relatively good summer transfer by our own standards, we’re about to loose Auba, Laca, Xhaka, Torreira, and probably Ozil in the next two windows. Talking about one step forward, 3 steps backwards while poor Emery still looking for “connections with our fans with our performance and moments.”

I don’t blame him

I said this weeks ago. The club will sell him and Lacca, buy a couple of youngsters and ask us to believe in their vision. The Kronke’s are happy as long as we aren’t relegated. I’m just aghast their isn’t a Kronke out drive. Least that can do is for them to take us more seriously. If he stays we will be a mid table team for the next 15 20 years, something they are comfortable with.

It’s already too late, even if they sack Emery now it will be almost impossible to get into top 4. Raul, the Football executive committee and the Kronke’s should be ashamed.

Impossible and quit difficult to get Europe League

Likely Aubameyang’s agent purposefully releasing this to push the board into a managerial change. Maybe a month too late though.

There is going to be a riot soon. Oddly enough this is uniting the fan base that was split over Wenger if you want any kind of a silver lining.

What they are doing now could take years to fix. But they just don’t seem to give a shit.

The course of the arm band

Unai’s plan is working perfectly. Soon he won’t have any big names in the dressing room to get into tiffs with and he can stock his team with his ideal mix of project youth 3.0 and mid-table grafters.

They should have sacked him during the international break! The board are a bunch of cowards. They were hoping that we would win the next few matches and all would quiet down. Daniel levy sacked poch, after all he did for his crap team because he was shitting himself about the position they were in! We won’t beat anyone with the way we are playing, Norwich will do us over and hopefully that will be bye bye Unai…

This is the problem with people agitating for a move. Most are too myopic to see bigger picture and issues that will further complicate things. Like spoilt children, they want things now but now may not often be the best solution. They need to grow up. Granted if unai cannot win the next two matches, likely the trigger will be pulled, the board has exercised correct due diligence in not being over reactionary and hysterical (unlike fans) Clear assessments need to be made about potential solutions to replace Unai. not anyone will do. The same fans bleating nonsense now were… Read more »

Do you type this in a word document and copy and paste?

One of the few times I can say that I mostly agree with you Santori. Though I see your enmity with fans being overly expecting and creating a toxic atmosphere, it didn’t originate out of thin air. I think everybody is united on Emery calling it a day at Arsenal. The fact is that we are no longer a top club, even if and when Emery leaves. We will see a departure of our best players; the longer this chap stays, the more that will want to jump ship. However all hope isn’t lost. I believe Freddie would be a… Read more »

Don’t think he will go . His agent just wants him involved ozil wages. Last year only a turkish and Chinese club were in for him. He Has wanted Barca since a child I read back in his Dortmund days. But they just spent 109 on greiszman !, (swap him for deSemele) , Madrid just bought the tall Serbian striker and extended benezema contract. It is just wages

We don’t have to lose hope ,but fight for what we hope for.

Totally wouldn’t blame the guy for jumping ship. He has done his bit admirably, he has scored many goals in a team that plays boring conservative football and he deserves better. That goes for Laca too.

We only have the hierarchy to blame for allowing it to get to this point. When you allow a shit manager to continue being shit and slowly suck the life out of your players of course they are going to want to leave.

At least sacking the guy now may give us a glimmer of hope of retaining some players.