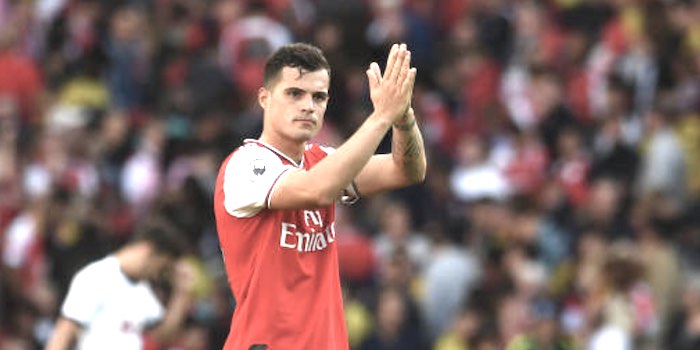 According to Swiss outlet RSI, AC Milan are interested in signing Granit Xhaka in January.

It’s widely assumed that Arsenal will look to sell the Switzerland midfielder when the transfer window opens even though he has said in a recent interview that he’ll work hard to get back in Unai Emery’s starting lineup.

The 27-year-old hasn’t played for the Gunners since he reacted badly to the Emirates crowd jeering him off the pitch in the 2-2 draw with Crystal Palace. He has also been stripped of the club captaincy.

While it may sound a little far-fetched, given the dust on the above situation has barely settled, but the report claims Xhaka is already house-hunting in Milan ahead of a deal with the Rossoneri. Who is driving the deal? Well, none other than Ivan Gazidis.

Our former CEO already earned us a nice sell-on bonus in the summer by buying Ismael Bennacer from Empoli and now he’s prepping his chequebook again. To be fair, it’s about time he started repaying some of those hefty wages we sent his way.

AC Milan are currently 14th in Serie A and sacked new manager Marco Giampaolo after just three and a half months (Gazidis obviously has a taste for regime change). Stefano Pioli took over last month.

Xhaka has also been linked with Newcastle United in recent days and in the summer was tipped to join Inter Milan.

Best for all involved, lets make it happen in january and move on.

Could they take Emery and Mustafi too?

Mustafi has been our best defender this season and scored a great goal last week in Portugal. He is back.
Surely the deluded board/suits only backing Emery cos the right replacement (Arteta, Allegri, Ajax wizard) are not yet available.

gazidis – more useful outside than inside the club!

I was about to post a foul mouthed opinion on Ivan Gazidis. But let’s all stay positive, I’m also glad he’s in Italy.

Xhaka would kill it over there , that would be a great move for him and tbh, I want to see him do well. It just won’t happen at Arsenal or the Premier League

Every player who has a problem at Arsenal is said to be wanted by Gazidis. Media that start these news are cognitively lazy.

Good news, Ivan can have Unai as well.

Sounds like an ideal opportunity to kill two birds with one stone.

Two birds with one granit

Thank you Ted, that was the joke 🙂

If I was him I wouldn’t want to stay here any longer. I hope we get a decent sum of money for him.

Would be ace if they took Mustafi as well.

Can we add in Emery as part of the transfer? Gazidis has been following his career for a long time after all and what better man to get Milan out of the rut they’re in 🙂

If Milan do want Xhaka then we should get Franck Kessie as part of the deal. He’s exactly what we need, big, strong
and can protect the back four.

True, he was benched last night as well vs Juve. Apparently fallen out with staff. Could be available in Jan.

How does he compare to Ibrahim Sangare? He looks excellent on YouTube. Athletic mobile fast but with excellent technique and passing too.
They are both the same age, Ivorian and in the same position so who’s better?

Just done some reading. Kessie doesn’t seem as good technically and more of a busy box to box. Sangare is an interception and tackling machine with lovely long passing. I would prefer Samgare to replace Xhaka. Willock could develop into what Kesske is now.

?
Best of luck working with that snake again

Yes Ivan, bring us Bennacer back. He did well against Juve last night.
…maybe not a good idea but he was more watchable to me.
Such is the state of our football, I watch more of our former lads these days.

Something nice in this mess we are in.

Interesting that Ivan the Terrible fired the coach after 3 months….

Gazidis should consider taking world class protagonist attacking football maestro Unai Emery as well. Maybe with Emery you will be able to compete with Bayern Munich like you promised to all of us. How has this man failed upwards to become CEO of Arsenal and AC Milan I will never understand.

Top bloke Gazidis, clearly still one of us. (sarcasm off)
I promise to buy a Milan jersey with Xhaka on the back if that really happens in January.

Take him. Do not pass begin. Do not collect captaincy.

Get what we can for him, though don’t think we’ll get an offer for more than 20 million.

Only us Arsenal fans think 20m is enough for Xhaka. He’s a star for his national team, a team that tends to atleast reach the group stage (further than that most often than not) of international tournaments. He has immense experience, has literally been a starter for every team he has played in, and is almost never injured.

Agreed – just because we all know Xhaka is a massively limited footballer, doesn’t mean that he isn’t one of the most marketable players we have in our squad. We should not be accepting 20million for him from Milan particularly as his game is suited to Italian football and he might actually look half decent in a league where football is played at snail place

Actually I was thinking that only Arsenal fans would think he is so terrible we must sell and yet so good we must get massive money for him.

I would advise Xhaka to go because I wouldn’t waste my time or energy on a failing club with losers for supporters. Xhaka was not a good choice to buy in the first place but he was a prospect and not a finished artical. There was pressure on Wenger to “SPEND THE MONEY” so was forced to spend £35 million on an average prospect. Xhaka was not good at all in his first season and suited to the premier league. But I never doubted his commitment or love for the club. In fact he cared too much and plays from… Read more »

We are so much better without Xhaka anyway, since the fans got their wish our results improved significantly..ohh wait.

Leaving aside the sheer fallacy of this argument, we’re not exactly worse either. Point being we need better than Xhaka full stop.

Can he take Emery too, please?

Damn, beaten to it…

If we are not getting anyone in who can play similiar role than him then selling him is a loss for us. I hope that even those who don’t rate are aware of that. Will we get someone in January? I don’t think so.

Remember why we bought him? Under Wenger, our midfielders tended to be 5 feet tall. They were too easily pushed aside. We wanted more power. Xhaka has delivered this, and he had improved his defensive work. Neither does he explode any more when he dislikes the ref’s decisions.

I would absolutely keep him. Guendouzi/Torreira still need time to mature. Ceballos is very fond of the ball and might be gone in May.

Matteo and n torrentia, are five foot tall or silly wenger type midfielders . Neither are hard .

They both try but torreria is often whacked half a dozen times in the first half – last week at Leicester . As he limped off the shot of Emery’s face , said to me. Emeryvthinkjng I wish I had signed 6 foot 6 nzonzi, he would not be getting knocked around by ndidi’

Emery probably will go to AC Milan when he is sacked. Sooner the better.

He’ll have plenty of suitors. Its not like our midfield has suddenly become anymore efficient and in control with him out.. If anything we are still passing side to side and backwards. Torreira hasn’t made us anymore secure. Its not like we have suddenly leadership without Granit. if anything it is worse with Aubameyang and Unai is back to dithering between 4 options rotating with no culpability on anyone. This mess is fan induced. Gazidis would have more than done good grabbing Xhaka for a struggling Milan side. And it isn’t as if we may get appropriately better midfield reinforcement… Read more »

Okay, but he must take Emery as well.