Logically this match was pretty small potatoes. In the grand scheme of the Europa League this match didn’t matter much, the big one left for Arsenal is home to Frankfurt. There is also a huge match on the weekend against Leicester with huge implications for Arsenal’s top 4 chances. Yet… Unai Emery’s teams find a way to make things that should be no big deal, a mess. 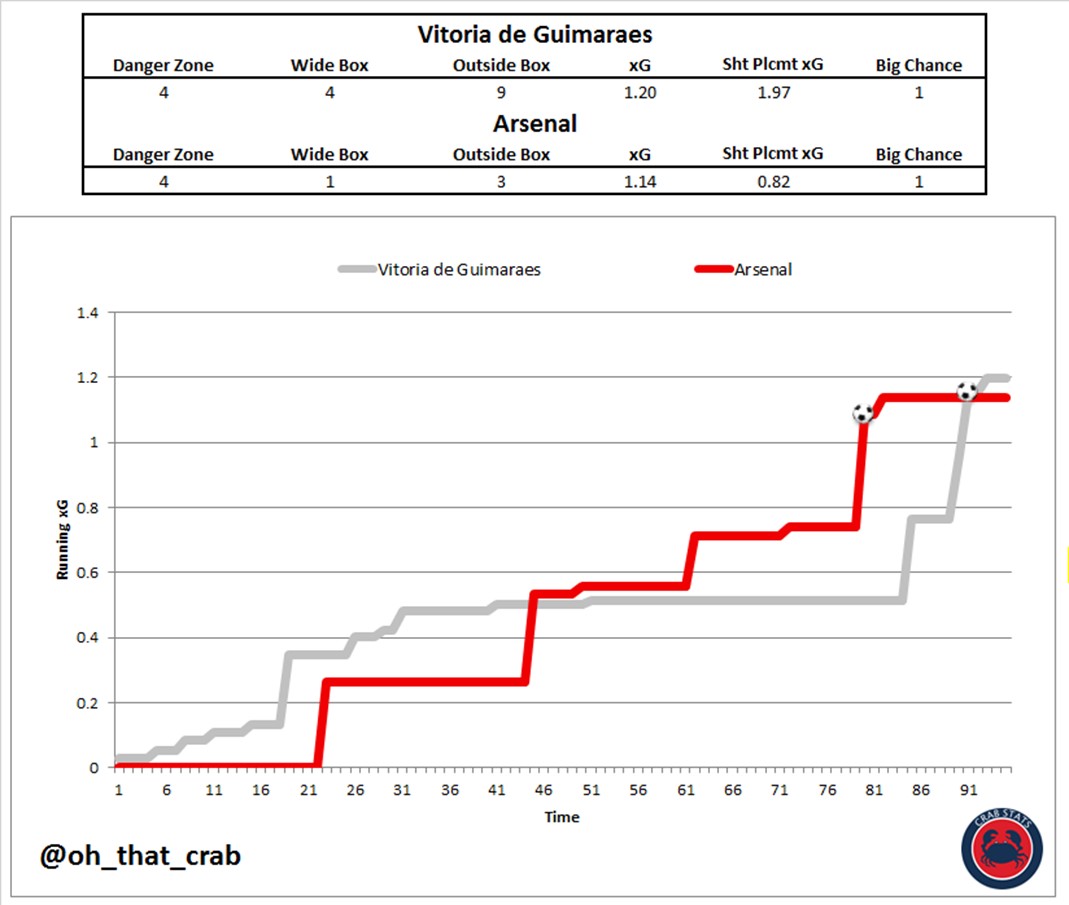 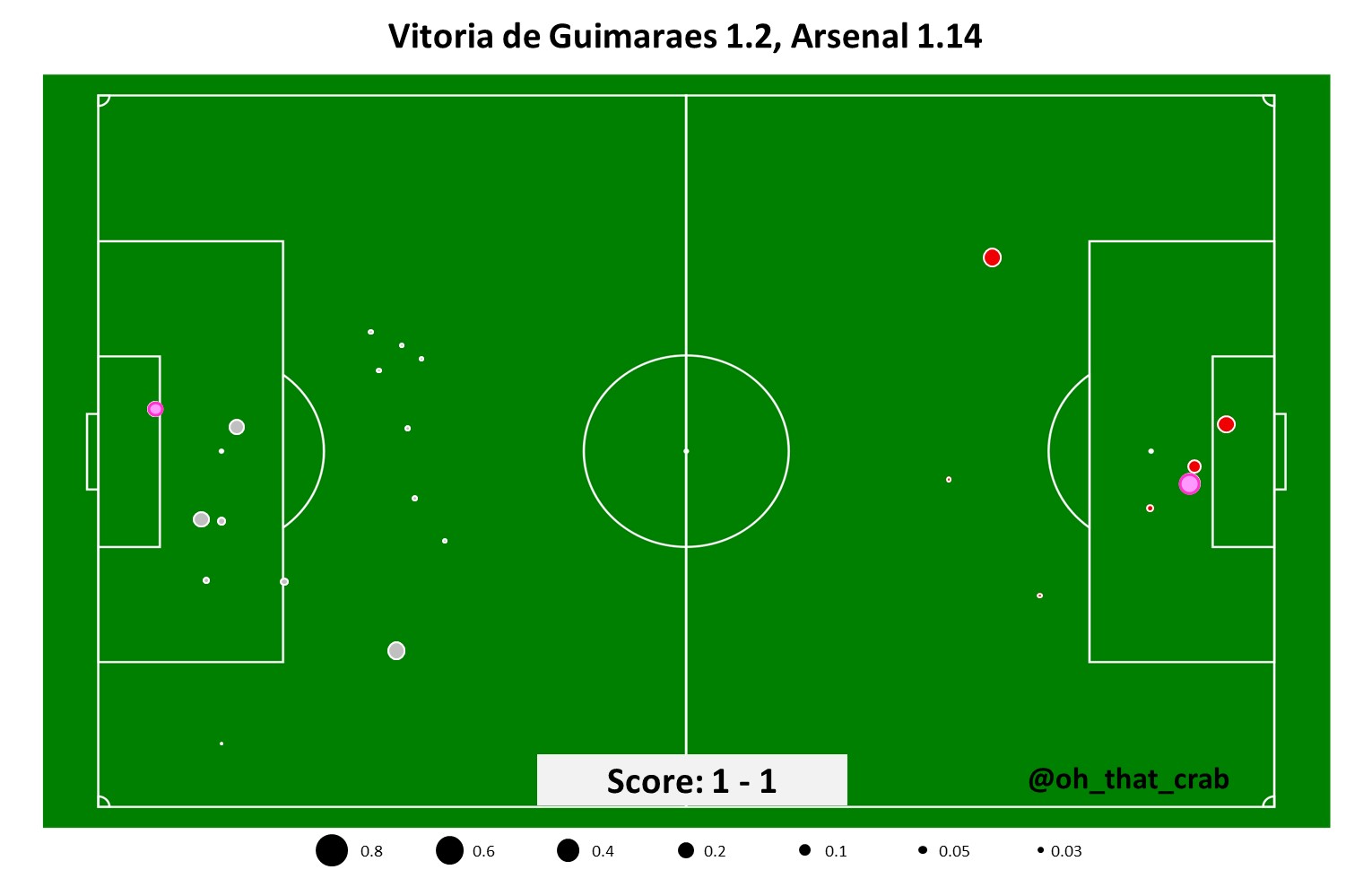 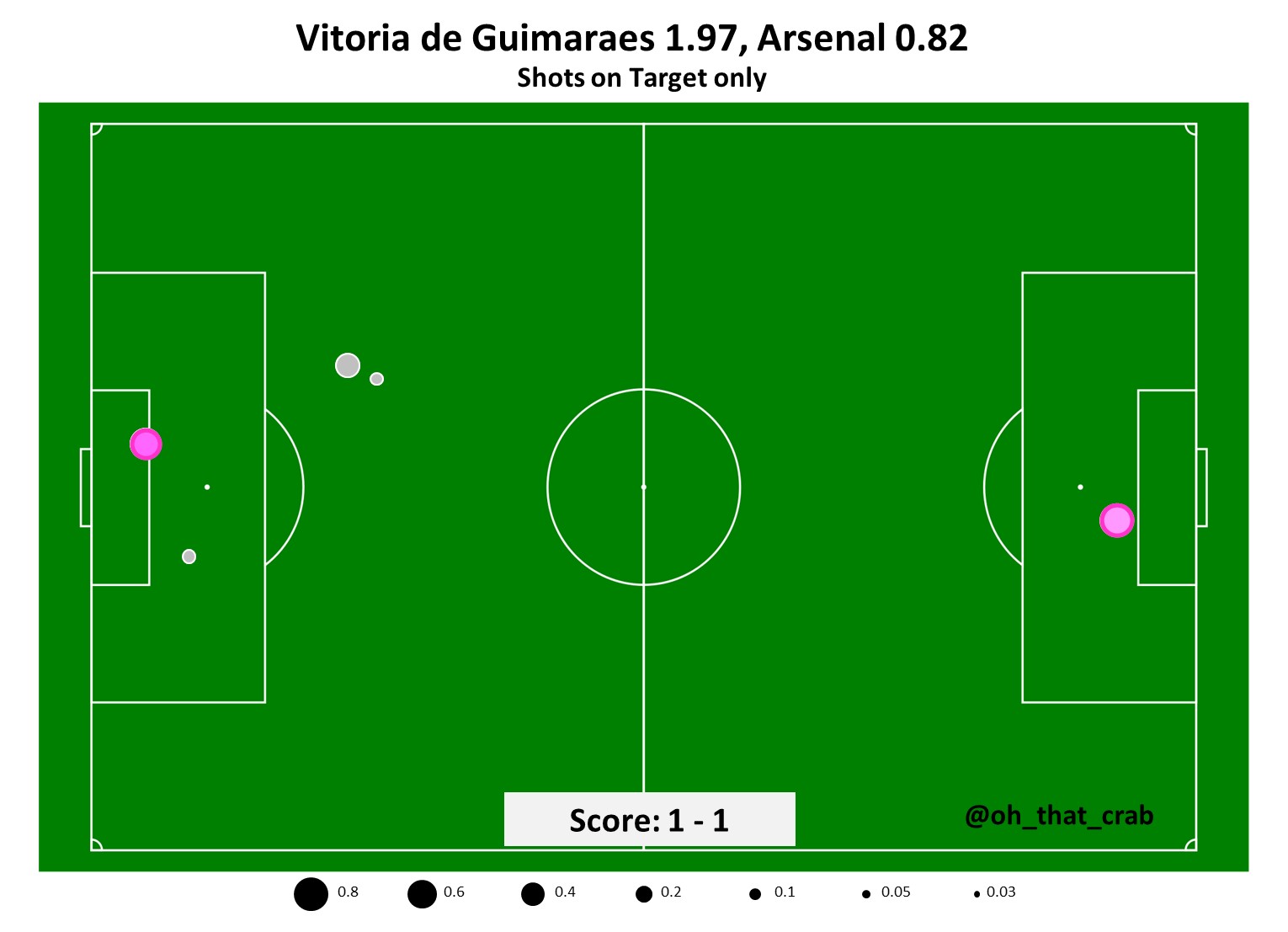 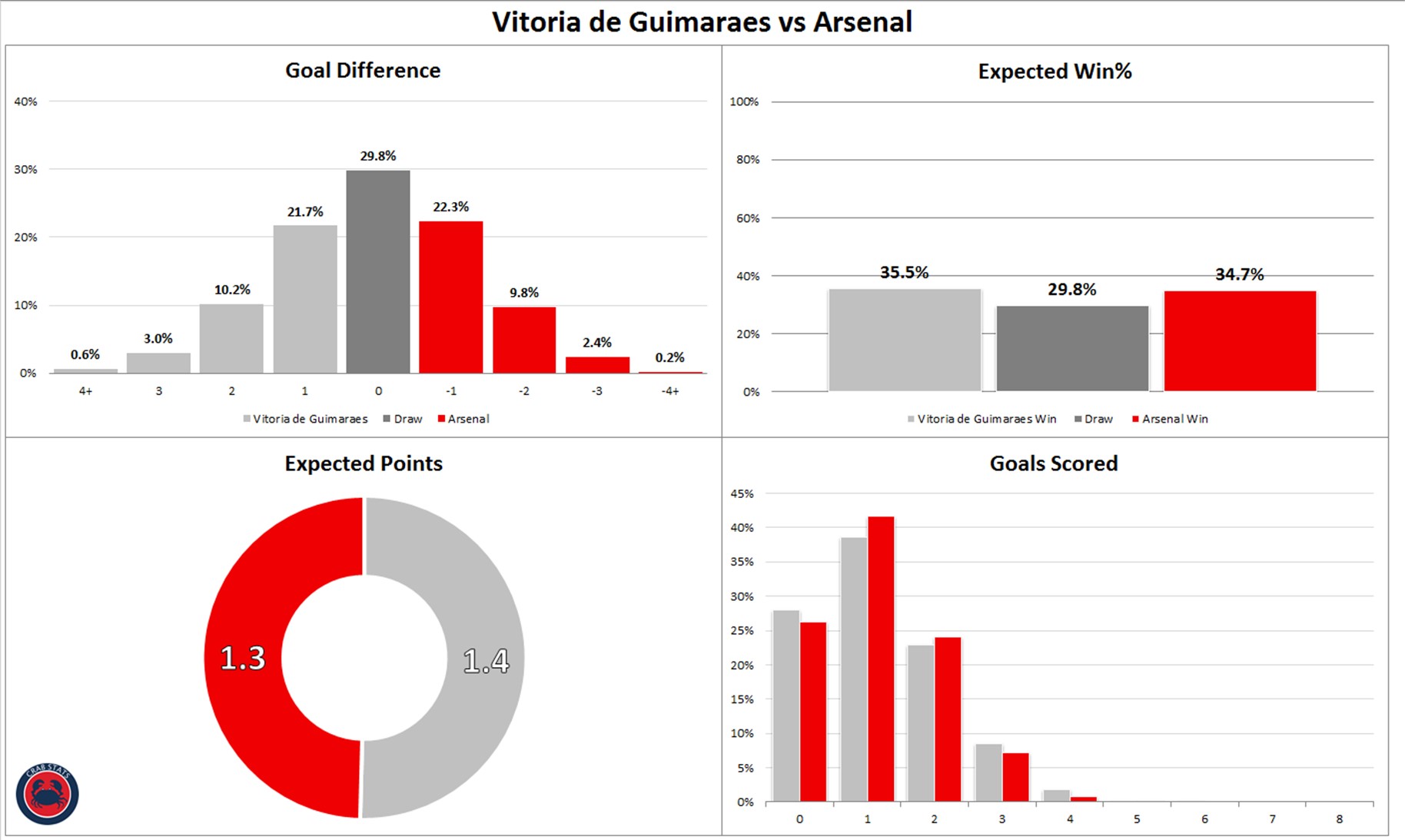 9 – Times that Arsenal have been out shot by their opponents in the Premier League and Europa League out of 15 matches played.

4 – Matches in a row were Arsenal gave up a lead

1 – Pass completed into the box by Arsenal in this match (doesn’t include crosses and corner kicks, because Opta treats these as a special class outside of regular passes), it was 5 including crosses.

5 – Passes completed into the box by Vitoria, 8 including crosses.

52.6 – Percent of passes for Arsenal that were square or backwards

In this match Arsenal had the definition of sterile possession. Arsenal struggled to advance the ball, and when they did it was only though the wings. Arsenal’s passing resembled the dreaded “U” shape but instead of the typical shape around the 18 yard box, this was around the halfway line. Almost all of Arsenal’s top pass combinations were between their center backs.

What this led to was that Arsenal were again relatively toothless in attack. The most damning statistic is that not counting crosses, Arsenal completed just one pass into the box, this was the assist that led to Arsenal’s only goal. This was another match where Arsenal were again out shot. In chance quality, it was again a match that was closer than the raw shot count but it again raises a major concern about the performance of this team.

In more than half of their matches (Premier League and Europe League only) Arsenal have been out shot.

That is simply damning. This hasn’t been a run facing the best teams in Europe either in fact it includes one “top” team. The full list of teams that have out shot Arsenal this season is: Newcastle United (15th in the Premier League), Burnley (14th), Liverpool (1st), Watford (20th), Frankfurt (7th in the Bundesliga), Manchester United (10th), Vitoria (5th in Primeria Liga, twice), and Wolverhampton (12th).

Normally I would try to find good or interesting things to highlight from a match but in this dark cloud of a team I am really struggling to keep looking for the silver linings.

I am beginning to wonder if this malaise is a case of Emery’s ineptitude, or more a case of players performing this way to force the manager out ala Chelsea.

BigArse
Reply to  A P

I think it’s more that they have lost confidence in him and his tactics, as well as the basic incoherence of said tactics. I think the players are floundering but not deliberately tanking.

Just playing Devil’s advocate for a second here. I’d argue this dramatic U formation has a lot to do with Mesut Ozil being the only true attacking midfielder in the squad. Without him who do we have in the center? We lost Ramsey, Iwobi and Mkhitaryan over the summer and it’s really starting to show.

I think that no matter who you have in the middle as a creator, under Emery’s tactics, nobody is going to fare well because as Tim Stillman put it in a recent article here, 10s in Emery’s ‘system’ are little more than fancy decoys. I’d certainly love to see more of Ozil back in the side, but if we’re expecting him to turn it all around, I think he’ll be hampered by the play style and instructions of the head coach.

We don’t use the midfield at all for any kind of attack under Emery, it’s all on the flanks. So even with Ozil, his only job would be to pass to a winger who crosses it in. You could have any player do that job.

Look at the Watford game, Ozil pass to AMN, AMN cross, Auba goal. I guess you could make the point that without Ozil, that pass to AMN wouldn’t even have been made in the first place.

Serpent
Reply to  A P

I think they’re following Emery’s tactics. That’s why we see a pattern, even though the players are switched around. We’re so boring I fell asleep to the game yesterday.

The stats for the season are completely damning. They are the consequence of failed tactics, a failed footballing philosophy. These performances are down to Emery. He must go as soon as possible.

The only thing I am hopeful for this morning is I am one day closer to See Emery Gone, A Guy can Dream.
I watched the game yesterday that wasn’t my team, I know my team and that wasn’t it, it was just a group of people totally unrelated chasing a ball for a Prize.
Entertaining this coach doesn’t make sense in any true arsenal fan Head, so whoever support giving the guy Time have to answer a very difficult question where his/ her loyalty lies.

History repeats itself first as tragedy then as farce. We, at Arsenal, are now past farce. This is really terra nova for me because there are no superlatives to describe this game. My reactions wasn’t one of emotional extremity like shock, disgust, rage or whatever else. Just melancholy. Under Wenger we had huge ups and downs. This season we just are drab, grey, sterile, cloudy, tedious and uninspiring. The losses don’t seem as cataclysmic, do not look so heavy, but in fact much worse. I don’t find anything this team does to be shocking. Actually now I just think this… Read more »

I don’t pity Unai Emery, I pity the players, Emery has a history of being fired after pissing everyone off.

So even the kids had an off day, big deal!
Twas always going to be a SAFE game once he rolled out the Back 3 formation again.
This game apart, the cup team has really been the sole consolation in an Arsenal season where clearly #Out seems to be the only thing everyone wants to focus on, is that what will define Arsenal through this new decade as well?

I think the point is that this “kids” team is now going the way of the first team. Is that because of the players or is it because they’ve now had more Emery attention paid to them? The free spirit of early EL/EFL games has now been funneled into the U shape that Scott refers to. Teams having more shots than us because they’re forced into it by a tight defence is one thing, us having fewer shots because we only go for the clean shots is another – what we’re seeing is neither of those. Until someone takes our… Read more »

Do a recorded delivery and mark it for the board and Mr useless Emery, send it first class, he needs to know how shit of a manager he is and how shit our board is for hiring this mug because I don’t think he knows his shit.

Maybe he develope a conscious and fucking resign. Miracles do happen.

He is now in the process of ruining our cup team , they have got worse as the number of games played in the CC and the ELC , UE is the problem

A worry I have is that the longer they let Emery remain as head coach and allow the malaise to pervade the squad, the harder it might be for a new coach to come in and flush the players of the awful mindset that Emery is instilling.

The current state of affairs is we go to a mid table Portuguese team late afternoon on a wednesday, play with wingbacks and try and hoop it around the outsides of the pitch. Thats just what we do now.

Edu as sporting director is just as culpable for this mess. He was supposed to be some “man of action whom only acceps winning mentality”, but since taking over he’s been hiding in the bushes like a rabbit as we struggle. How about pulling him from there and ask how he is going to handle this mess? Where is the winning mentality? This ain’t gonna end well unless we see some collective responsibility. Wenger was thrown under a buss as it took ages to fire him, same goes for Emery now.