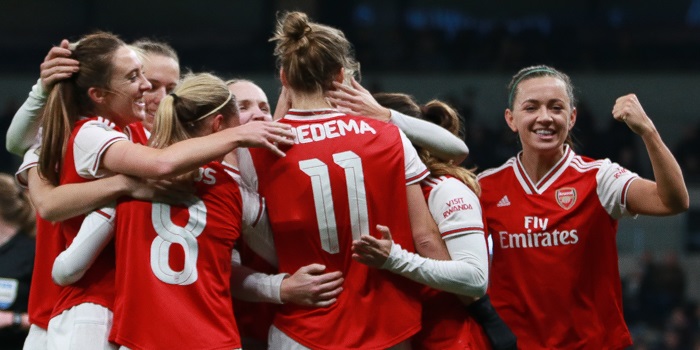 The story so far
Arsenal top the league on 27 points having won nine and lost one of their ten WSL games so far. Manchester City are three points behind them on 24 points and Chelsea in 3rd on 23- however, Chelsea have a game in hand. Arsenal’s solitary defeat came in October when they surrendered an early lead to lose 2-1 away at Chelsea.

Top of the #BarclaysFAWSL tree at Christmas, @ArsenalWFC!

They did however, beat Manchester City at home in October. Other highlights include a 2-0 away win in front of a record WSL crowd at the Tottenham toilet stadium, while Vivianne Miedema confirmed that she remains good at the football by scoring six and assisting four in an 11-1 win over Bristol City in December, a record victory in the WSL’s eight-year history. Arsenal have not dropped a point to any team outside of the top three since April 2018.

What’s to come?
A nail-biting title tug of war with Chelsea and Manchester City. City have lost to both Arsenal and Chelsea in the first half of the season, but both London sides have to travel to Manchester before the season is out. Chelsea have beaten both of their title rivals, but have to negotiate away games at both teams yet.

Arsenal provide perfect symmetry with a home win against City and an away defeat to Chelsea, meaning they welcome the Blues to Meadow Park- Sam Kerr and all- in January, but play City away. These games will go a long way to deciding the destination of the WSL title.

Key dates
Arsenal welcome Chelsea to Boreham Wood on Sunday, 19th January. Chelsea were the only side not to lose at Meadow Park in 2019, recording a 2-1 victory over the Gunners in January 2019. In fact, Emma Hayes’ side have beaten Joe Montemurro’s side in each of their last three fixtures.

Their next WSL game takes place away at Manchester City on Sunday, 2nd February. It’s probably not an exaggeration to say that these games will decide whether or not Arsenal retain their title. Other dates for your diary, Arsenal play Spurs at Meadow Park on 9th February- a weekend when the men do not have a fixture. Manchester United come to town on April 5th, while the team conclude their league campaign at home to Everton on Saturday, 16th May.

The story so far
Arsenal made short work of Fiorentina in the Round of 32, winning 4-0 in Florence in the first leg before a comfortable 2-0 win in the 2nd leg in Boreham Wood. The Round of 16 proved even lighter work for Arsenal, beating Slavia Praha 5-2 in Prague before administering an 8-0 shoeing of the Czech side in the 2nd leg, rounding off a 13-2 aggregate victory. Vivianne Miedema is currently the top scorer in the Champions League with 10 goals.

What’s to come?
A mouth-watering quarter-final tie against Paris Saint Germain in late March. PSG boast household names such as Formiga, Nadia Nadim, Sara Däbritz (who will miss out due to an ACL injury), Christiane Endler and Alana Cook. If Montemurro’s side negotiate that tie, there is a semi-final against Bayern Munich or defending champions Lyon in the semi-final. The final takes place in Vienna on May, 24th.

The story so far
Arsenal sailed through the group stage in 1st place with comfortable victories over London City Lionesses, Bristol City, Charlton Athletic and London Bees. The Gunners were held to a 0-0 draw away at Brighton and lost the subsequent penalty shootout to decide who gets the extra point, but that proved to be immaterial for Arsenal. Brighton also qualified from Arsenal’s group.

What’s to come?
Arsenal play at home to Reading in the quarter-finals and will be hot favourites to progress to the semis. Elsewhere in the draw, Chelsea play Aston Villa, Manchester City face Sheffield United and Manchester United play Brighton & Hove Albion. It looks very likely that we will have the exact same semi-finalists that we had last year. The final will take place at a neutral venue on Saturday, February 29th, with the semis on January 22nd or 23rd.

CONFIRMED: Details for the #ContiCup quarter-finals ?

FA Cup
Arsenal will enter at the 4th Round stage on the weekend of 25th / 26th January. 3rd round ties are yet to be played, the draw for the 4th round will be made on Monday, 6th January. The final takes place on Saturday, 9th May at Wembley Stadium.

For a more in-depth, statistical look at the first half of Arsenal’s season, check out our player-by-player breakdown here.

Love all the content Tim.
Can’t wait for the 2nd half of the season, roll on Sunday!!

A good summary of the mouth-watering menu for the rest of the season.
Still baffled by the lack of an announcement for a game to be played at the Emirates. The 9th February v Spuds seems perfect and a quid pro quo for the record breaking day at the Toilet Bowl.

Thanks, Tim. What a pleasure it must have been to put this together.

We are so consistent. Long may it continue.

Consistency is a key component of this team. Just had a look back on the individual statistics and on the basis of what the counters have come up with they might as well hand the 4 trophies over now! We all know about Viv’s incredible record breaking figures but you can look at any member of this group and think “This is some player”. Lisa is always a worthy one one to ponder. Her direct goal contributions for a (mainly) right-back are immense. Whilst Viv rightly got the accolades with the perfect 10 against Bristol, in the same game Lisa… Read more »