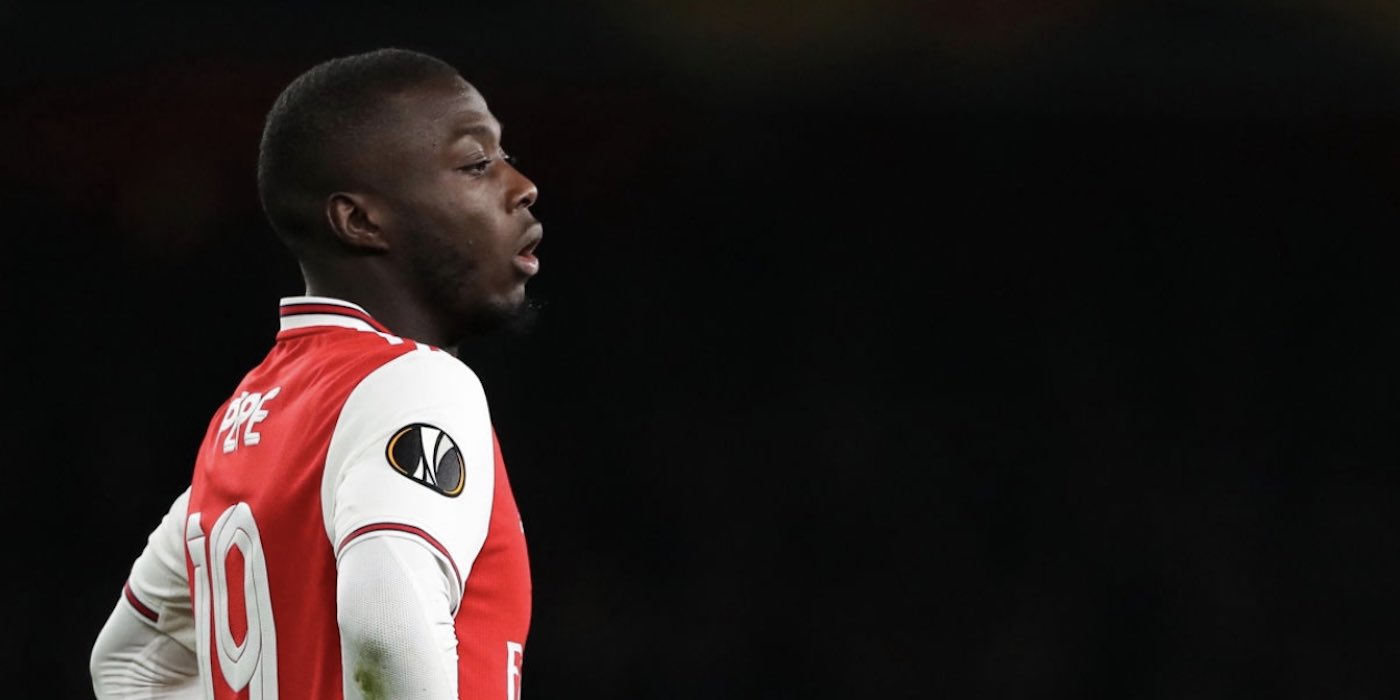 Mikel Arteta says he’s sure Nicolas Pepe has the potential to be a ‘top player’, but insists the record signing needs to convince him he’s got what it takes to start with his work on the training ground.

The Ivorian international has had some fantastic moments this season, but defensive lapses and adaptation to a new league have made it a more difficult start to his Arsenal career than we had hoped.

However, the new manager says he’s here to help the 24 year old, who should take heart from the work he did at Man City with Raheem Sterling and Leeroy Sane.

Asked about why he’s struggled since his £72m arrival from Lille, Arteta said, “I think it is a mixture of things.

“It was obviously a big change from France to come here. As well he found a team that at that moment probably wasn’t performing at its best.

“The environment wasn’t the best for him to settle. It is not only about him we are here to help him.

“If he is willing to learn and willing to work hard I assure he has potential to be top absolutely top.

“Today [against Bournemouth] in two or three actions he has shown how good he can be, but he has to be consistent.

“The problem is confidence will only come when he plays, but he has to train well enough to convince the manager I am confident enough to play him.”

He hasn’t been helped by injuries either, but it does sound as if Arteta is demanding more from him to help him realise that potential. Let’s hope he can respond to that, perhaps starting with Chelsea tomorrow.

Who is the Chelsea thug that will get him with a “dark yellow”?

The smell of john Terry is still lingering around chelsea

Yeah… right… You’ll be trying to convince us that Stoke are the new Barcelona next.

A Different George
Reply to  Archer

I always waited for Gary Cahill to “accidentally” elbow someone in the head in every single match in an aerial duel, and the television announcers saying it was obviously inadvertent as he wasn’t that type of player. We won’t even mention their legendary captain-leader.

TeeCee
Reply to  A Different George

As per the banner, that’s; “Captain, Leader, Legendary Cunt”.
Shame they never had a stand long enough to unfurl the whole thing.

Gotta be that c*nt Alonso, who wants it that lil more.
Bellerin remembers.

Two wins out of two for Ancelotti.
Looks like a great move by Everton….

Yep, Everton will finish above us too for the next 3 seasons. Hopefully we learn our lesson and get an manager with some management experience.

Okay, seriously, enough is enough with the myopic viewpoint that experience is the golden attribute in a manager and that anyone lacking it is destined to fail here. Studies support that experience in a single field don’t necessarily correlate with increased performance and, in many cases, as people gain more experience, their performance actually decreases (if interested, read the recently published book “Range” by David Epstein). To bring this closer to home, the most common complaints against Wegner before his departure consisted of words and phrases like “living in the past”, “stubborn”, “out of ideas”, and “unwilling to adjust”. We… Read more »

Agreed.
If we wanted experience we could of had Pelligrini, he worked out so well for WHam.

Would you let a dental hygienist do a root canal on you? How many games has Arteta managed on his own? He sat next to a good manager with unlimited amount of money. Would you hire Arteta if he assistance to the Crystal Palace manager???

@Naked – the comparison between performing a root canal and being the manager of a football club doesn’t make sense. Consider the following:

The required procedure for properly performing one root canal, more often than not, will look very similar to performing another. Thus, training and experience are inherently more valuable.

On the other hand, managing a football club is a vastly complex affair with all sorts of variables. Managing one football club vs. managing another likely brings with it entirely new circumstances and challenges. Past success therefore does not necessarily predict future success. Experience is not as inherently valuable.

A voice of reason in these forums, I tip my hat to you, sir. You could have pushed back with snark, and yet you chose patience extrapolation and put in effort to discuss the opposite viewpoint of fellow Arsenal fans. Hope Naked Cygan has had a change of heart, or at the very least, a reduction in the certainty he feels about his position.

My experienced dentist did a root canal on one of my teeth and fucked it up so much that the tooth fell out days later.

I do not get this comparison. Everton have a different set of problems than Arsenal. Whose can say definitely that Ancelotti at Arsenal will do just as well as Ancelotti at Everton.

If we lose both of these tough games, we have Palace away, Sheff Utd at home, then Chelsea and Burnley away. We could potentially get very few points from those games. I think we’re in a relegation fight. Could you ever have foreseen that?

“I think we’re in a relegation fight. Could you ever have foreseen that?”

Yeah. Sometime last April actually.
How Emery survived the Summer is the height of ignorance. To allow him to continue with the same model for several more months this season places us in this predicament.

It is– what the math says it is.

Agreed and I think half the team are not up for a sustained fight or are looking for an exit. Confidence is shattered. I think we’re drifting in to mediocrity.

Drifting towards mediocrity? I’d say we’re already there and trying to find our way back

Far too pessimistic. I can’t think of any player who wasn’t committed in the match against Bournemouth.

We’ve been in relegation form ever since the dire end to last season. Emery has dug us a very deep hole to try and climb out of

So correct Emery had absolutely no idea about coaching. In the short time Arteta has the team I can actually see what he is trying to done.

This article by an Lille writer is interesting :- “I think Pepe is a winger who is also a world-class finisher. This is a guy who played goalkeeper until he was 13. He understands them like few others — that’s why his finishes, even from long range, are rarely blasted and always placed. I say this because it’s one of the two factors that, I think, have slowed him a bit. We played Pepe in a 4-3-3 in a very specific position: He was wide, with freedom to come inside and a full-back behind him who always covered for him.… Read more »

I tripled captained him for the Chelsea game

Thus far he has been anything but convincing. The talent is there but not sufficient work ethic. Some people want to provide convenient excuse that he lacks confidence and its Unai’s fault but frankly the player has only himself to blame. Off ball work is insufficient. I mentioned some months back if he increased his output off the ball, it would help his on ball confidence as well when the fans get behind him. …till now, his only good performances was the two goal strike in the europa and one PL encounter . Neither were sustained through the 90 nor… Read more »

This kind of tactical approach from Arteta (like Pep) best described as a net, capturing and containing the other side and with players to shift and cover should they attempt to break out.

Strange that the biggest question on Pepe is his application. You’d think before we laid out all that money for a record signing we’d do our homework.

Hoping he steps up.

Ya gooner
Reply to  Martinelli fanboy

He’s come to a new country and perhaps to a somewhat disjointed atmosphere. He seems like the type of player that needs an arm around his shoulder, hopefully arteta can sterling him.

Lizard
Reply to  Ya gooner

I agree. For those old enough to remember Rober Pires was poor for the first eight months of his Arsenal career before it suddely clicked in a game against Spuds and he was brilliant thereafter.

Martinelli FanBoy
Reply to  Ya gooner

I’m beginning bro become a fan of Stealth characters with leadership like de bruyne, cazorla etc rather than the Sanchez type. Fabregas showed this quality when playing for us.

Martinelli and ESR seem to have it in spades.

Except that them has been no sense of lack of application when he’s been on the field. Started to show form and was instantly benched. I hope that Arteta will play him regularly

I just find it awkward that we’re already too judgemental on Mikel when in all honesty the squad needs serious attention in defense, midfield & of course confidence levels are way too low overall. Unai messed up a lot & almost all the players need moral boost to tick & games are coming in every after 3 days which is not easy for the new manager..
All things being equal we’ll notice some positive changes with time but I don’t want to crucify Mikel for our poor decision not to sack Unai a bit earlier

The negativity is astounding but I’m a afraid fully expected. Arteta has been great so far but supporters have to
Understand that a Club is the Team AND it’s supporters. The clue is in the name, rue SUPPORTers need to SUPPORT. Let’s support and lift this young gifted team and hope the older more experienced players now act professionally and perform. They need us and provided they give 100 per cent we should support them!

He’s outrageously talented, but just needs coaching with regards to defensive responsibilities (tracking back when we lose possession high up.the pitch and pressing to be more specific). I think, with the help of Arteta, in 2 or 3 months from now we’ll see a very different Nicolas Pepe.

I’ve never seen an obviously talented footballer play as crap as Raheem Sterling used to. He’s not crap anymore. If Arteta had anything to do with that, Pepe will be alright.

Pepe isn’t the first, and won’t be the last player to take a season to settle. He looks like he has real ability, hopefully he adapts to the demands of the league sooner rather than later. We were crying out for a top class no9 for years, then we signed Lacazette + Aubameyang within 7 months, but we lacked wide forwards, as we let go of Alexis, Walcott and Ox. We now have wide forwards in Nelson, Saka, Martinelli, Pepe, who are all raw, but I think will all come good over the next 12-24months, but I wouldn’t be surprised… Read more »