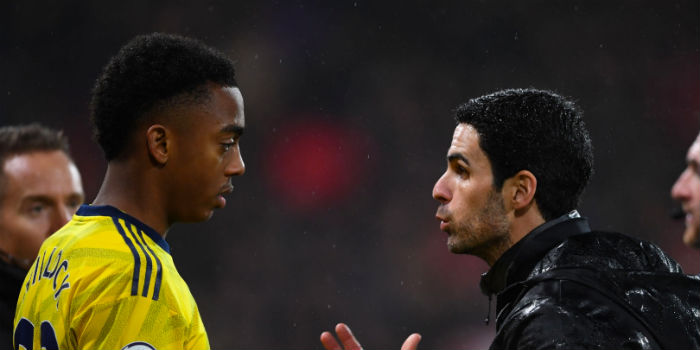 Mikel Arteta may only have been Arsenal head coach for eight days but his energy and tactics have already got the first team excited, according to Joe Willock.

Arteta was an animated presence on the touchline during the 1-1 draw with Bournemouth, barking instructions and encouragement at anyone within earshot.

While a win escaped the Spaniard in his first game in charge, he was quick to praise the attitude and application of his players and to thank the fans who’d made the journey on Boxing Day.

So far, Willock has been impressed by what he’s seen from the new boss and hopes an upturn in confidence will see results improve.

“I feel like everyone is excited, there’s a big buzz around the changing room, everyone’s laughing again and everyone’s got their head up.

“We’re trying to build confidence in each other and on the pitch as well so hopefully we can transmit that on the pitch.”

The Gunners close a traumatic 2019 at home against Chelsea tomorrow. Calum Chambers returns from his suspension but we could lose Sokratis who took a heavy blow to the head in a collision with Ainsley Maitland-Niles.

Sounds very positive and it can only get better. Let’s beat the chavs!

Hope this kid gets plenty of chance with arteta. Got a great attitude and a hard worker and I think he’s going to have a big future at arsenal. Said it before. Reminds me a lot of Díaby!

This the biggest insult for Diaby. Willock has good attitude but he’s not got good talent. Loses possession like its 2nd nature.

Well that’s not true. He has a little less flicks and tricks, but he is 20 not super man.

You build confidence by putting on a performance and actually winning games. Not by buzzing in the training ground and dressing room. You also buzzed when Freddie took charge and look how that went.

Win the match against Chelsea tomorrow! Practically running out patience with this lot!

Guy take a glass of wine and relax. We are winning tomorrow and I we don’t I promise to buy you a season ticket. Relax man

I’m glad this is an open promise.

What is Premier League Productions and is it a reliable source? I can’t find the original content anywhere..

I knew AMN would come in useful sooner or later. 🙂