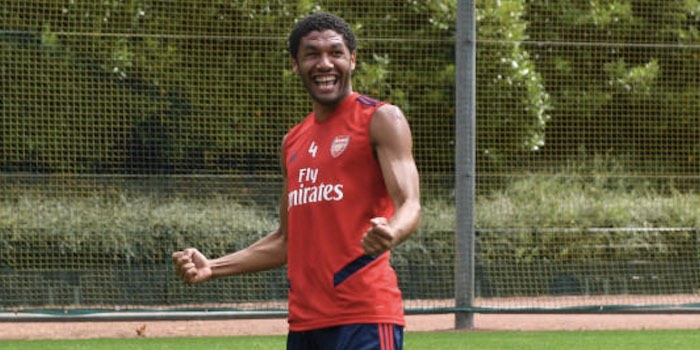 Mohamed Elneny is close to a move to AC Milan according to … his dad.

The midfielder is currently on loan with Turkish side Besiktas, but the Serie A side are reportedly showing interest with talks at an ‘advanced’ stage.

Speaking to local TV, Nasser Elneny said, “”The negotiations between Mohamed and Milan are at an advanced stage, but the contract has not yet been signed.

“They have renewed interest in my son and the next few hours could be decisive for sign with Milan.

“He did well with Besiktas but wants to move to a stronger league at Milan.”

It’s hard to remember a situation when we’ve loaned a player somewhere for a season and then sold him halfway through, but then we’ve become a club that does all kinds of stuff for the first time in recent years, so who knows what might happen.

It would obviously have to be a permanent move, and that would swell the transfer kitty ahead for January reinforcements, so it does make some sense.

Honestly, had totally forgot about him. Good luck to him wherever he ends up.

I too had totally forgotten about him!

I guess most of us had. For that reason I wonder if his sale to AC will swell our transfer kitty or add few ££.

However good luck to Elneny wherever he goes.

I was thinking oh no, not another internal solution/ lans situation

ScotchEggsRule
Reply to  Gooner for life

Me too. At a glance I thought it’s talk about Emery 🙂

Samesies. I wish him well in Serie A.

Maxin In The Shade
Reply to  Sancheezy

I dunno, I thought he was always a decent player for us. Perhaps not the top, top quality we require but he was fairly consistent in his performances.

A busy, tidy player who I’m sure will do well wherever he ends up.

Best of luck to him

BidOnLard
Reply to  Maxin In The Shade

I thought we could do with someone who can make a safe pass without giving to the opposition in panic. Still yhisncould provide some £ for replacing Xhaka. Credit to Gazidis, maybe he cod take Raul while he’s at it.

Must be strongly recommended by Ivan Gazidis. You can take Mustafi too! Come on!

Credit to Gazidis for attempting to take all his mistakes with him to Milan.

What does Gazidis have to do with picking players to buy in Wenger’s era?

He became my best midfielder in FM with regular 90+% passing and goals.

Kudos, I love an underdog story

Good guy, never complained in public but sadly not good enough for the level I want my arsenal to be. His transfer fee was low and I also believe his wages too. Good enough for back-up but at this point I rather give minutes to our promising young guns. Good luck wherever he ends up as long as we get a good fee.

He’s a decent and committed player. Never complained, always worked hard. I think he would do well with a more organized coach. It’s just he never really had one with us and doesn’t seem to be the sort of player to just know what to do without instruction. He was part of a very good Basel team and I remember him bossing it against Chelsea for them. I thought we had a real player on our hands when we got him. Just didn’t quite live up to his potential but had some nice moments. That goal against Barcelona was a… Read more »

I always rated him. Bit of a puzzling one how quickly his stock dropped under Emery. Then again, Emery’s judgement of players wasn’t always the best.

Was slightly confused why we kept Xhaka and let him go. I think him at Milan and Xhaka at Hertha is a pretty interesting indictment on their strengths as players.

Must say I’ve missed him a bit this season. Limited as he is, his high energy and movement could have been useful when we have been struggling playing out from the back against a high press.
But best of luck to him if he gets that transfer.

I think that with Arteta he could be back to his Basel times perfomances.Could easily become a Fernandinho type of player.

Was bought in during Wenger era and Arsene always gave him a lot of chances for most likely good reason. Always felt he did a good job for us, was always disciplined in his defensive duty and never went all Alex Song Bilong. Good luck to him whatever happens, he deserves it.

Good luck to Milan, he won’t help them.

Mediocre player we should have got rid of several seasons ago.

Stand out player for Malmo in 2013 CL was Salah eventually bought for Chelsea, 3 years later we bought Elneny a side passing non tackling non scoring non shooting non defensive non forward passing midfielder.. a lot of nons that has added to our mediocrity, he’s obviously set up for life £ wise thanks to us and good luck to him a player who must of felt he won the lottery like so many Wenger put on advanced wages when he was no better than championship level, wots he worth now at 27 ? £4 mill if we’re lucky..

Would be good if that worked in January, I guess. We could certainly use the funds. All the best to Elneny. He always gave everything he had when he was playing for us. Hope he clicks at Milan, even though their situation is also very difficult at the moment.