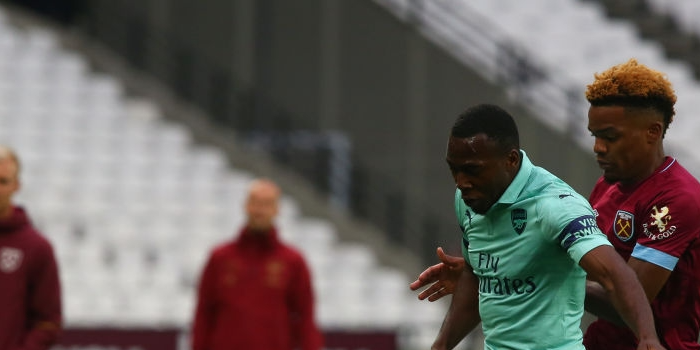 Most of the players who were in the same scholarship intake as Tolaji Bola are now experiencing senior football of some description.

Donyell Malen, for instance, has played in the Champions League for PSV Eindhoven, while Eddie Nketiah has gained experience representing both Arsenal and Leeds United.

Bola, however, is, at the age of 20, yet to play a minute of senior football, competitive or otherwise.

There are some significant reasons behind that, with a series of injuries having hindered his progress, while Bola has never been the most reliable of defenders.

The youngster was an unused substitute in the Carabao Cup victory over Nottingham Forest earlier this campaign and has been training regularly with the first-team of late, even more so since the appointment of Mikel Arteta.

With Kieran Tierney and Sead Kolasinac both sidelined, Bola was selected to travel with the Arsenal squad for yesterday’s game against Bournemouth as the 19th man. He may not have made the bench, but it was still a valuable experience for the youngster as he got to see how the first-team prepare for away games.

There is a feeling that Bola could soon be given his chance in the spotlight. If Kolasinac isn’t available for the FA Cup game against Leeds then it wouldn’t be a major surprise to see Bola thrown in at left-back as Bukayo Saka surely won’t be able to play every single game.

As alluded to, Bola does have defensive deficiencies, but he has shown some significant improvements of late at U23 level with regards to his positioning. In addition, he provides a significant threat with his teasing crosses.

It is difficult to envisage Bola succeeding at Arsenal in the long term but he may well be called upon at some point over the next few weeks.

All hands on deck

Don’t we have some youngsters at left back that can cover Sead and Tierney? I mean a real left back…not a makeshift one…?

Defender with defensive deficiencies. Good luck to him but at 20 time should be running out for him at premier league level.

It takes a longer time for a defender to mature than a forward or a midfielder. Give him some time

Honest/innocent question, so if it gets you all riled up just calm down lol…but is it normal for major PL clubs to play striker/wingers at fullbacks, even when there are injuries? It just seems so odd to me still the AMN was (and still is) our security at RB and now Saka, a striker/winger right, is now our LB.

Just curious. I don’t follow other clubs like I do Arsenal, so it may me be more common than I realize.

I think arsenal blew it this summer for not bringing in a RB. Not only was HB hurt but coming off a major injury. On top of that they saw just last season how not having another competent Sr RB on the roster not that lichtsteiner wasn’t a Sr RB but he was too old and not good enough hurt the team.

Regarding saka isn’t this just an emergency. I mean you can only carry soo many Lb on the Sr roster?

Right…but we don’t have anyone in the academy that is available in pinch? A real LB third stringer? Not sure if you follow baseball at all, but I like to think our academy is kinda like a minor league system where we can call on players in an emergency. Using Saka as a LB is like using a centerfielder at third base…just call up a young kid who actually plays 3rd base (LB in this instance) instead of someone who doesn’t. Just seems weird to me. What the hell’s the point of the academy if you don’t even have a… Read more »

I do follow baseball lol I understand what you are asking but I don’t think you realize the gap there is between the academy and Sr team in the EPL. I would say it’s more like A ball jumping up to MLB. The transition is easier for the most part for attacking players than it is for defensive players because mistakes are easier to deal with from an attacking player than a defensive player coming from the academy imo. It’s so rare to see guys like bellerin doing it but he was highly rated in the first place plus Wenger… Read more »

This is a most excellent development, Jeorge, after having seen him training with the first team under Arteta. I am often espousing arguments for his inclusion, (as frequent conesseiurs of arseblog may corroborate). There would be no better time to give him his debut than in the cup match. Yes he is not yet the finished article when it comes to his defensive technique, but left-back is his natural position and one would reasonably surmise that he is likely to more defensively adept than Saka, who (although performing admirably given the circumstances) should really be played further up the pitch.… Read more »

Jeorge is an astute observer of the youth programme at Arsenal and, from what I’ve seen of the U23 matches (great to watch by the way), I must agree that Bola is not likely to make it at the senior level. There are others that stand out much more.