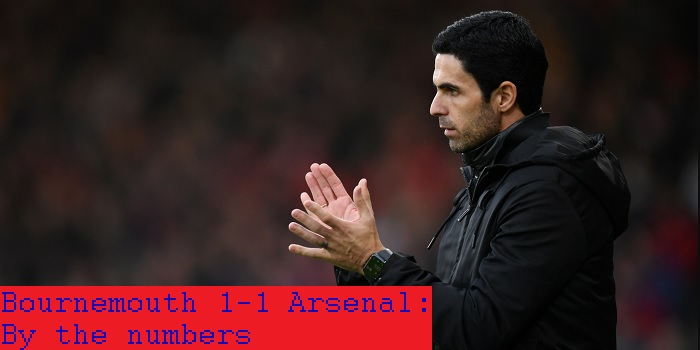 The boxing day match was the first match probably since at least September that I was very excited to see Arsenal play in with the new manager (head coach) bounce clearly effecting my interest levels. In the end the result didn’t end up perfect but what did appear clear was that there was a change in the process for Arsenal.

There isn’t too much to play for left in the League (thanks Raul for letting that happen!) so hopefully with less pressure Mikel Arteta can use that time to really focus on instilling his philosophy on the team and maybe look to favor the Europa League knock out stages.

Bournemouth 1-1 Arsenal: By the graphs 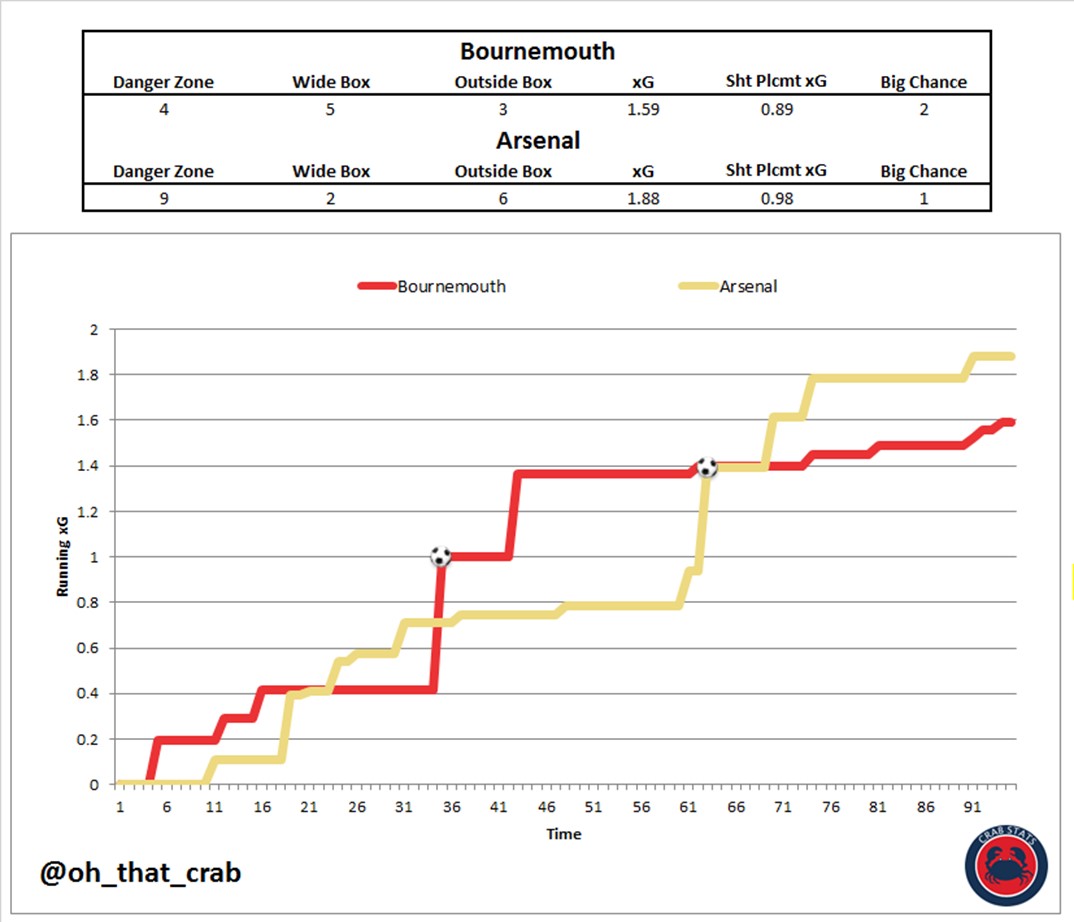 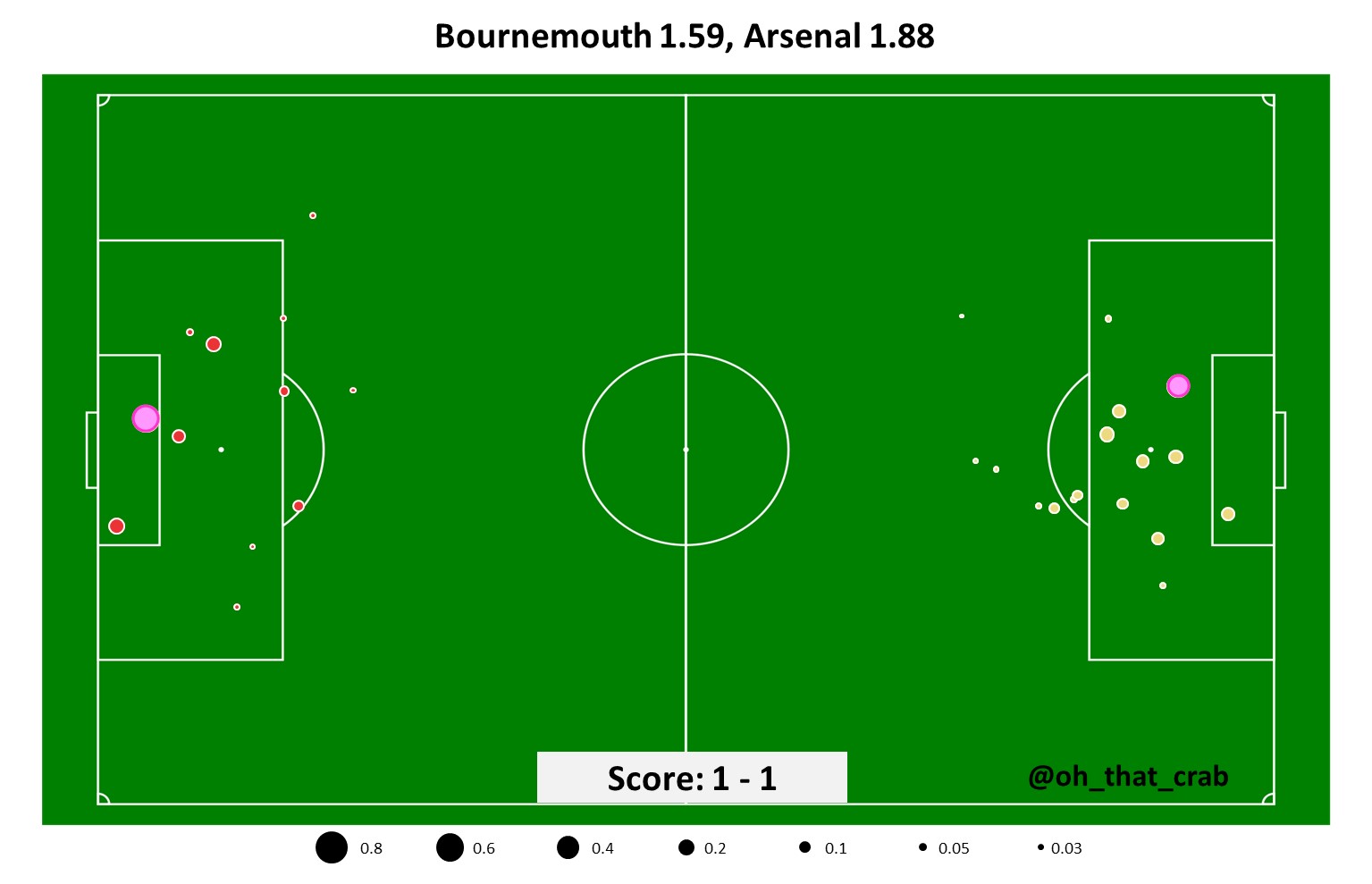 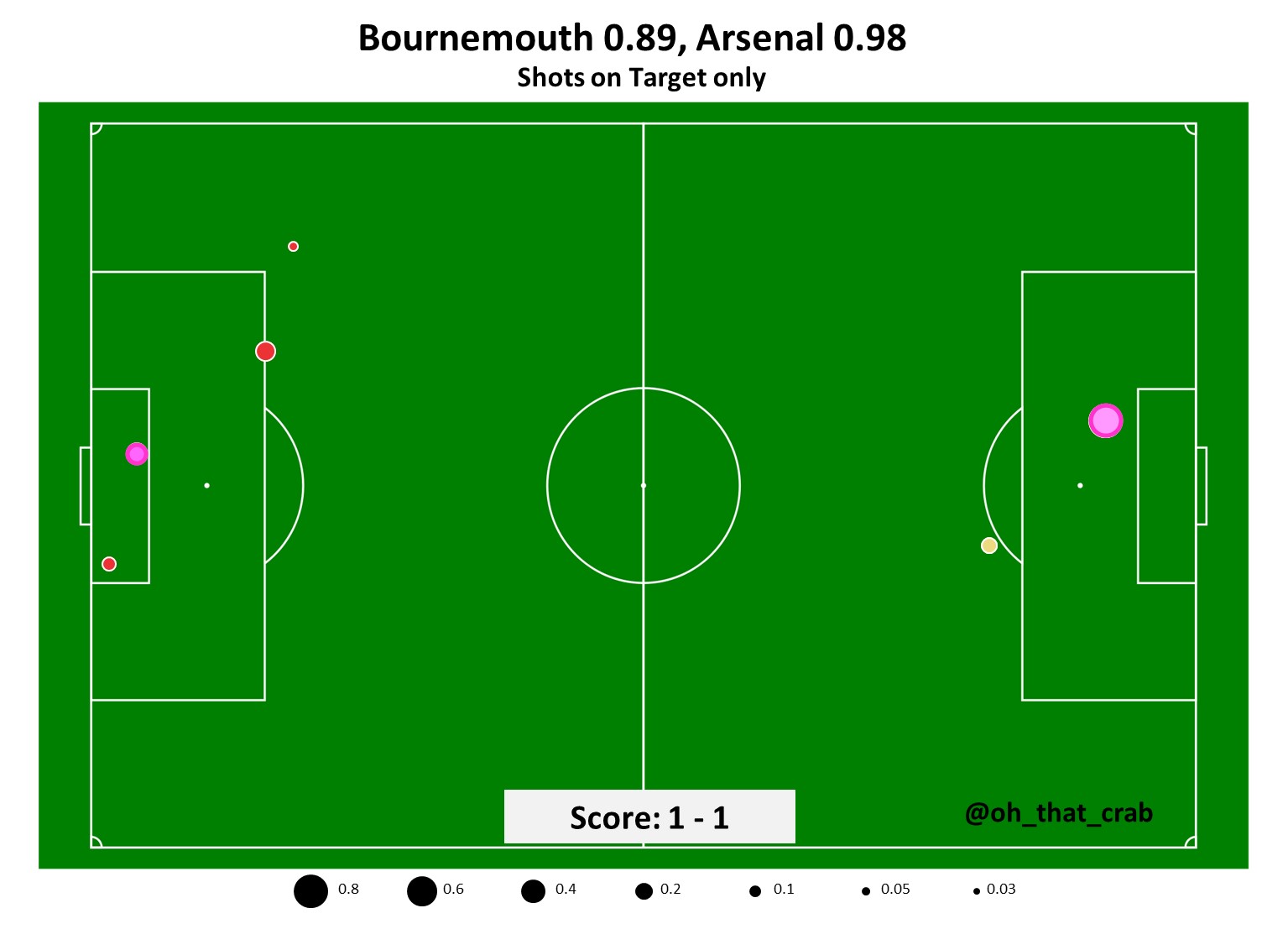 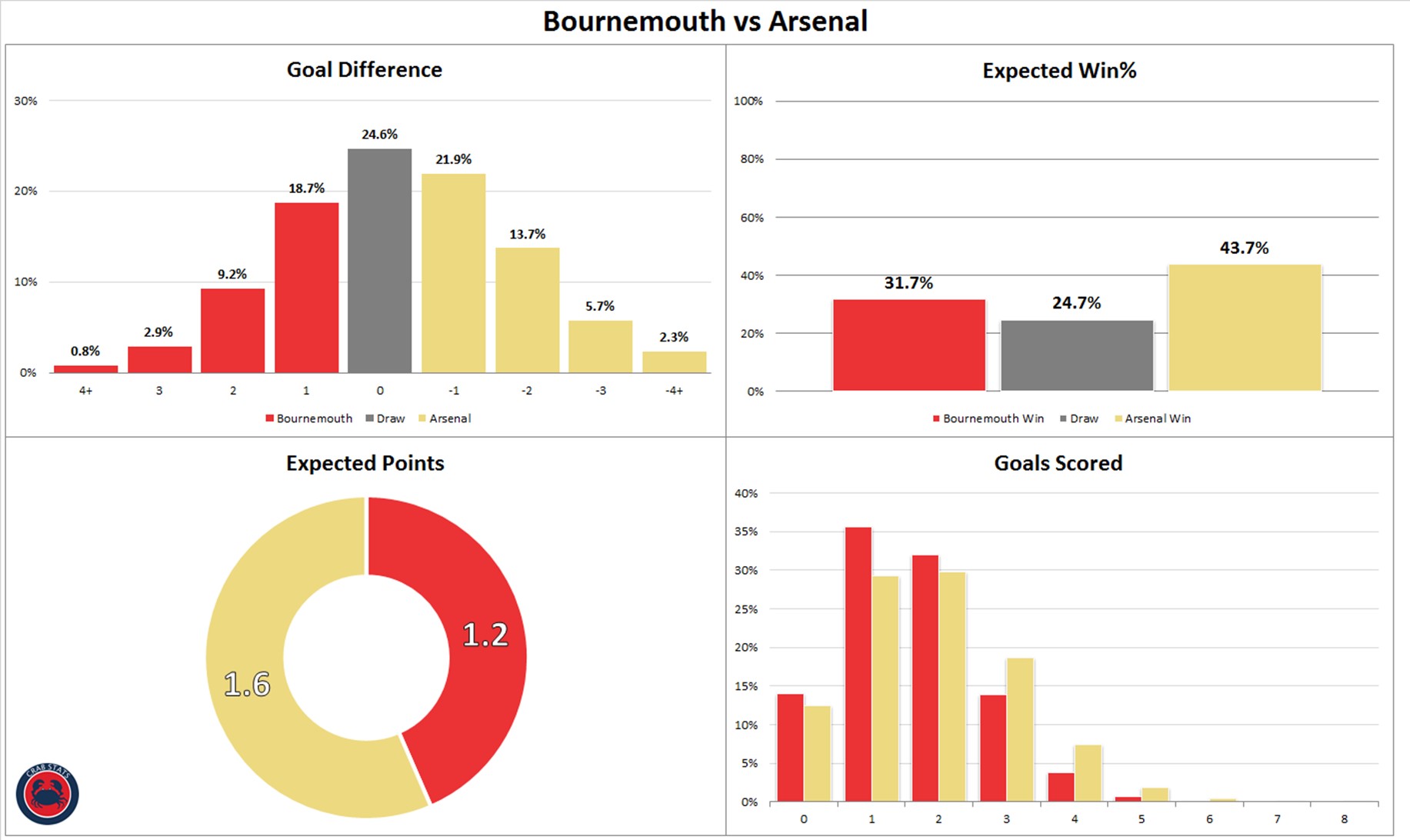 Bournemouth 1-1 Arsenal: By the numbers

17 – Shots for Arsenal, the most that they have managed in an away match this season. (Would be the 3rd highest in a Premier League away match during the Unai Emery era, thanks to @Orbinho for this nugget)

12 – Shots allowed, the fifth fewest in an away match this season

+5 – Shot differential for Arsenal, the highest in an away match this season. The second highest was +1 (twice, at Norwich City and Sheffield United)

127 – Passes completed in the final third, the third highest mark in an away match this season.

19 – Passes completed into the box, the highest total in an away match this season.

This was far from a perfect match, but there was a pretty obvious game plan in this match to look to exert control on the match through sustained possession. With a further departure from what Arsenal had done this season, there was also a semblance of a plan to turn that possession into pressure. What stands out is that this was by far Arsenal’s best away numbers from a pure shots perspective.

There were still defensive lapses (it is an Arsenal defense after all) but the overall structure looked pretty solid. Another interesting tidbit that will be interesting to watch is that in this Arsenal had 12 interceptions in this match which is by far the most they have managed in an away match (previous high was 9) and the second highest mark this season. Under Arsene Wenger, Arsenal were almost always towards the top of this statistic (averaged 6th most from the 2009-10 season to 2017-18, finished with the most interceptions twice). One match doesn’t make a trend but it will be an interesting if this is a blip or a reversion to a new defensive style.

Does Lacazette deserve to keep his starting spot?

0.19 – Expected Goals assisted from those 2 chances created (0.1 according to StatsBomb and 0.16 according to Understat)

4 – Passes completed inside the box (of 4 attempted)

This match typified a lot of what I have seen from Alexandre Lacazette from his time at Arsenal. He had a pretty good overall match but didn’t quite have the decisive moment to push him from good to great.

There is probably one moment that people are going to remember from this match and that will sway the opinion on his match. The moment is his one on one with the keeper in the 70th minute where David Luiz plays a through ball to set him free and he can’t convert his chance. To be fair I have it rated as a 18% scoring chance so missing it isn’t a massive surprise but it is a moment that you hope on of your more talented players does come through.

That leads to main question, should he continue to be a starter, especially if it means that Pierre-Emerick Aubameyang has to start from the wing? Before I was much more of the opinion that he should be sacrificed but after this match I have revised my opinion to see more from Arteta’s tactical approach. In this match Aubameyang found himself much more central then he was under Emery and wound up getting 5 shots of his own, so the attacking trade off might not be as high as I had initially thought.

2 – Chances created, 2nd most among all players (both from open play)

2 – Tackles, tied for most on Arsenal

2 – Interceptions, tied for most among all players

The role given to Granit Xhaka in this match was an interesting one. Instead of playing as the deepest midfielder during the buildup phase, he would often shift to become the left sided player of a line of three with the two center backs. This gave Arsenal a solid base to build from but also allowed him more times with less pressure to pick his head up to be able to progress the ball forward for Arsenal.

This was interesting tactical change that Arteta made, but it might end up being short lived with Xhaka linked to a move back to Germany in January.

Sources: Opta via Whoscored, StatsZone and my own database. StatsBomb via FBref

Interesting signs that things are improving. Not strong oppo but at least the players seem to have understood Arteta.

Isn’t that a little harsh on Bournemouth? I think a lot teams struggle there, they are really well organised and committed. As a result, it was a pretty decent result and to outplay them on their own turf is to be commended.

Hehe. Perhaps Davey perhaps. But it’s worth remembering they’ve had the same manager for 7 years. Arteta’s had about 7 hours with the players and we did outplay and outthink them. I feel like historically the Vitality has been a tough fixture for us and we could have won it comfortably if Laca was on his game. It felt like that was more than a new manager bounce too. It seemed like, for the first time in a long while, there was direction and purpose to what we did.

Whatever Xhaka can do, Wilshere, Cesc and co did it better. He’s a good player but his glaring weaknesses were obvious even before he came to Arsenal.

Agree, he was an amazing player at Everton, but at Arsenal he was just OK. I wish him all the best, and I really hope he does great. I just feel our players are just not enough. We were used to be called soft, nice, no balls, easy to beat team. But we always had the skills and talent to win games. Now I feel we don’t have the skill and talent like before. These guys are emotionally too soft with no fire in their belly. We need a few players to start standing up, shouting on the field and… Read more »

Whatever (insert current player) can do, (insert past players) and co did it better.
Works every time, try it!

Whatever aubameyang can do, John Hartson did it better

Xhaka’s Biggest problem is his lack of pace. That’s what’s killed his Arsenal career. We need to move him on ASAP. He’d be better off in Italy.

I really hope the fans are going to back Laca through this run of poor form.

He never stops working or wanting the ball, and was player of the season last year.

Let’s keep this in mind before we throw him under the bus.

Laca needs a run of games to get his form back. He’ll come good if we give him a little time. And we certainly have that now.

Interesting, not a word about Özil in the analysis.. And he was maybe the most interesting transformation.

Appreciate the detailed look at Laca after that interesting game. Özil’s analysis would be interesting too, as he seemed to benefit from a fresh start.

If we are to be fair. Xakhas and every midfielder who will join in the next few years biggest problem will be that he is not Patrick Vieira or Cesc fabregras. I just dont like his attitude.

Interesting analysis, but have to agree with some comments, that an analysis of özils play would have been nice. He made some really quality ruthless passes which laca & co didn’t make the most of. If you cannot offload him, than use him…make him the heart of all and maybe it will work out… ? Maybe

If Xhaka leaves, Ceballos can take his place as it seems to require minimal physical involvement and no unnecessary forward movements in the Arteta formation

I still think ceballos will be quite a player, and will suited to artetas formation as he likes to come deep anyway. He’ll just really have to work hard defensively.

It is amusing that you put it down to just one player. That’s not how football works my friend.

It’s not about one player for me -it’s an ethos -I’ve supported the club for over 40 years and until recently there has always been a continuity of players. Ramsey for me represented that continuity -having been in the first team for over 10 years. The majority of our current players have had less than 2 years in the first team. There is little cohesion -the team is weaker than the sum of its parts. That has not been true of arsenal before in my time -even in the early 80s when we had a weak squad we outstretched expectations… Read more »

It’s not about one player but if you take out the talent in the centre of the pitch whether Cesc, Santi or Aaron nothing works as well. Xhaka simply doesn’t have the mobility or close control to replicate their contribution.
Under Unai we abandoned the middle of the pitch altogether and it made us very vulnerable. Mikel is beginning to establish a proper system that brings the best from the players he has – allowing us to dominate the pitch and play the Arsenal way.