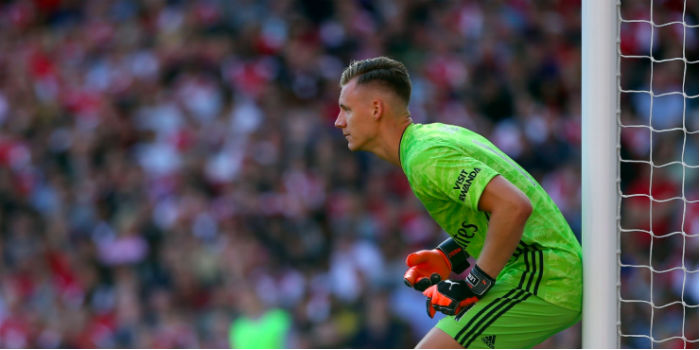 Bernd Leno says Arsenal still have a chance to qualify for the Champions League by finishing in the top four even though the club sit 11th in the table at the halfway stage.

The Gunners have never collected so few points (23), won so few games (5) and conceded so many goals (27) at this point in a Premier League season and need a drastic improvement under new head coach Mikel Arteta.

The Spaniard takes charge of his first game on Boxing Day when we travel to Bournemouth before Chelsea and Manchester United visit the Emirates.

Leno believes the fact we still have so many games against the big sides means we can dictate our own destiny.

“Of course, because I think there are still many games,” said the keeper, when asked if a top four finish was realistic.

“We play against all the top six. We have a lot of opportunities to win games against them. We still believe. It is in our hands.

“We have to show mentality, we have to play good football and I think then we will have opportunities.

“When we just speak about tactics or quality or what was in the past, it doesn’t matter. I think the only way is that we work hard, that we get back our strong mentality and then I think I am confident we can reach our target.”

Leno’s optimism is, in part, driven by Saturday’s clean sheet against Everton; our first in 15 games. While the game was drab and we barely created any chances to win, the fact Arsenal defended as a collective – something called for by interim boss Freddie Ljungberg and Arteta, who gave the players a brief pep talk pre-game – was a positive for the German.

“It was completely different to other games, but you can see only with intensity, with mentality, we didn’t concede a goal,” he said.

“We didn’t let them have chances, like Freddie said and the new manager. I think the lineup was very good because everybody was fighting for the team and we showed great mentality. Unfortunately, we didn’t score, but I think at the end of the day we can be happy with our performance and especially with our mentality.

“We didn’t let them have any transitions like in the other games. The distances [between our defenders and their attackers] were much closer and I think this is the only way you can play, because the Premier League is too strong to have one, two or three players that don’t defend. This is the only way we can play and we can be successful.”

Arsenal head to Bournemouth with Hector Bellerin in contention to make a return at right-back. Unfortunately, Calum Chambers, man of the match at Goodison Park, will be suspended meaning Sokratis, who missed the last game through a suspension of his own, will likely partner David Luiz. In the absence of injured duo Kieran Tierney and Sead Kolasinac, today linked with a moved to Serie A, Bukayo Saka is the favourite to continue at left-back.

I recon arteta has told the squad this, and he’s right. If we can get a good rub of form on and beat one of Leicester or Chelsea we can put ourselves back in it. Let’s hope for it but not expect it and concentrate on getting back playing sexy football.

Atom
Reply to  Ya gooner

While I love the optimism, the reality is we’re going to need to win at least 16 out of our remaining 20 games to make the top 4 as we’ve dropped so many points against lower sides. The top 4 is gone so better to focus on implementing the style of play Arteta wants to play and getting the team in a position to make a run at the Europa League which is a far more realistic path

this maybe worked in the past, but last couple of years every team bar the usual top two (plus Leicester this year) throws points away left, right and centre.
it might be a tad more complicated after the last round – prior to it we were 7 points off chelski, which isn’t really that much over the course of half a season. now it’s a little more tricky – granted – but in this new era PL nothing is impossible.
still, let’s get our shit together first.

I actually think we are all probably performing the same act of cognitive dissonance.

If we tell ourselves this team will never make the top four – given that most things we think Arsenal will do they don’t – then surely if we say it a lot and with enough conviction we will somehow rise from the ashes and finish third with a Europa Cup win to boot.

@countleaf The issue at this point is Man City & Liverpool are going to take 2 of the spots. leceister also likely takes 1 particularly as the lack of any European football is very similar to the year they won the title & when Rodgers almost won it with Liverpool. It allows them to get by on a smaller squad as the demands on them are so much smaller – especially if they don’t prioritize the FA cup. That means we’re fighting with Chelsea & Spuds for the final spot. Even if this ends up being a down year and… Read more »

One bright spot is that Chelsea’s run has been fueled by youngsters, and they might hit the wall in the New Year. Depends how they reinforce in Jan I guess.

The teams above us should cannibalize each other enough for us to overtake them, but first we have to overcome all our fitness, form and quality issues. Meh I’m not optimistic

What is that some kind of out of date April fools joke? I can understand that players have to be motivated but cmon man get real. Nobody is buying that.

Leno is not only great goalkeeper but great comedian as well. How not to love this man

You’re confusing him with the comedian Jay Leno, who is a great comedian yes.

Our Bernd Leno is a great goalkeeper tho, you are absolutely right about that

Let’s see. In the last 5 years, one needed 71, 75, 76, 66 and 70 points for 4th place in the league. The average to reach the spot is therefore almost 72 points. To still reach 72 points in our 20 remaining games we would need for example 16 wins, one draw and three losses. Let’s say losses against City, Pool, Chelsea draw against Spurs. The rest of the games must be won – without any exception – that includes Utd, Leicester and each and every “smaller” team. So, yeah, if we started that run then for sure the top4… Read more »

A Different George
Reply to  Kbs

Four of last year’s top six–Man United, Spurs, Chelsea, and us–have had long periods of being absolute crap this season. It is entirely realistic to think this will continue, and any one of those sides that is not crap for very long can finish ahead of the other three and will be in the Champion’s League.

Who said Germans don’t have a sense of humour…

We have to stay in the premier league first to play in the Champions League.

Apart from the top 3, everybody is dropping points to literally anybody, so a near perfect run in the 2nd half of the season could get us there. It’s possible, but this squad gives me zero confidence. 9 points from the next 3 games would be a good start.

Well said Mr Leno. I thought the part about having two or three players not doing defensive work was telling.

He’s right, of course. City and Liverpool are miles ahead of us. Not just due to their signings. All of their players do the hard yards.

Arteta needs to get rid of those who won’t do the dirty work when needed. I think he will too.

I can see a few meltdowns from fanboys of certain players in the coming weeks, when Arteta probably drops them.

kaius
Reply to  Right across Sunderland!

Yeah Mr Leno’s been handing out some serious subtweets recently.

If the defence doesn’t get it’s act together the poor guy will be acting like Mad Jens 2.0 by the end of the season

The delusion of positive thinking.

So no one is noticing Leno talking up the captaincy, with a youngish or new squad lineup, he sure will have a heavy nod…….

I love your optimism Leno, I really do but…

Sorry, not happening unless we spend heavily in January. Attitude will get us so far but a lack of actual skill/quality/ability cannot be wished away. Still I live in hope and pray fervently you prove me wrong

Sounds like Leno is piping up a bit and channeling a bit of the Germanic straightforwardness Lehmann had… Distances, passengers, good lineup etc… of all our players he must be the most pissed off with any kind of justification.

It might be unrealistic but we should aim for it all the same, hopefully a good run of form will bleed into our EL campaign. Winning it is probably our best shot at getting back into the CL next season.

“I’ll carry the shopping I have a safe pair of hands”
“I can sleep on a plane I’m good in the air”
“These letters are mine I always protect my near post.”

Plus this is a league with Klopp, Pep, Moanrinho and now Ancelotti (regardless of current Everton shortcomings)

Looks like a more modest aim is to sneak into europa. we do have the europa league still.

IF Arteta doesn’t have ‘immediate impact’ and we slip to more dropped points against Chelsea and United forthcoming (never mind away at Bournemouth), we will be slipping further down the table.

Yeah right Leno! And rhinos have tiny small wings on their arses. Its not your fault though. Only good thing is that it means less cash for the owners.