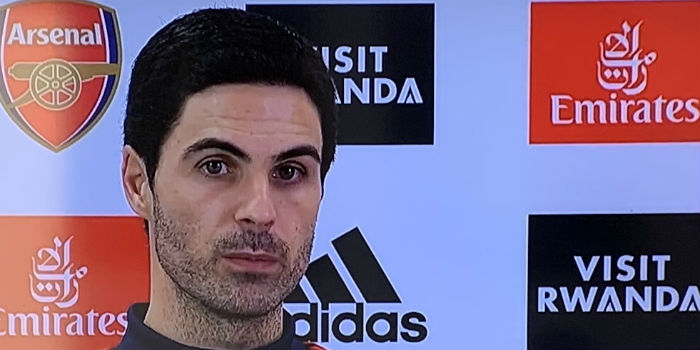 Freddie Ljungberg will remain part of Arsenal’s coaching set-up after Mikel Arteta confirmed he had held positive talks with the Swede after the 0-0 draw at Everton.

Raul Sanllehi and Edu were both adamant that there would be room for Freddie following Arteta’s arrival but that didn’t quell suggestions that the 42-year-old could look for opportunities elsewhere having tasted life as a head coach in the aftermath of Unai Emery’s sacking.

Facing the media ahead of his first game in charge of the Gunners, Arteta was asked about his conversation with Ljungberg and they’d come to a resolution over his future.

“I spoke to Freddie after the game,” confirmed Arteta. “I told him my ideas about the people I want to bring to form my coaching staff, the roles and responsibilities of each of them and I wanted to know what he was feeling.

“I wanted to know what he had in mind and what his expectations were. We talked and we made a decision that the best thing was for him to carry on with us.

“As well, his knowledge of the game is going to help us get better.”

He added: “I knew him a little bit obviously, and we will start a new chapter now with new ideas, new ways of doing things. I got a really good impression. He’s ready to help. He was very positive.”

Arteta was also asked about Ljungberg’s suggestion that he wouldn’t have picked Mesut Ozil for the last game, even if he’d been fit. Substituted against Manchester City the former Germany international kicked his gloves to the floor in a fit of anger.

“It’s a question for him [Freddie], I just wanted him to make a decision to pick the best possible lineup to win against Everton.

“My job started straight after the game, I have to pick the players up, first of all mentally. I need to put them in the work frame [of mind] that I want.

“For me, they have a clean sheet. I told them.You’re not going to be judged on things you’ve done in the past, whether they are negative or positive.

“This is evolving every day and I’m expecting you to perform and be in the right mindset every single day for me. If you do that, you’ll have a chance to play. If you don’t, you won’t.”

It’s great news that Freddie is sticking around. Given all the change that has happened a bit of continuity at London Colney will no doubt be welcome, especially for the youngsters in whom the Swede put so much trust last weekend.

Looking forward to steady progress towards the top 4, which we may or may not achieve but let’s keep the faith for now.

In the short term, Freddie staying is good for all but for himself Freddie has to leave to become a head coach. He is at least ready to be a head coach in championship or in the MLS that he knows very well.

he will leave in the next 2 years, even if he feels needed now he is bound to be inundated with offers already.
if all goes to plan we will be in a decent position by then and he will feel he is needed less and will probably go then.

that being said I can see him leaving early jan to malmo or someone.

Fuckin’ excellent! Get in Freddie!

The two will bring the Arsenal way back again

GOOD stuff
Nowhere for Ozil to hide now. He better shaped up or ships out

Freddie is not head coach quality just yet. He wears his heart on the sleeve, during some passing of poor play you get the feeling he wants to go out and just start playing himself.
We know our boys aren’t mid table material. I hope Arteta can channel his midfield to provide the glue in both offensive and defensive transitions.

I think they seem very compatible in what they expect Arsenal to be. Will Freddie be given the assistant managers position though?

It’s kind of sad how we are celebrating this clean sheet. It shows how far we have fallen but I am very optimistic that we will rise again. I am with Arteta on the need for mental lifting of the players. They need to see winning and clean sheets as normal. Draw and loss should be incidental and not acceptable. I hope we will start saying “Mikel knows” and “In Arteta we trust” again while winning trebles unbeaten. It’s a dream but COYG

Espen
Reply to  Me from here

Good news for our academy graduates. I’m glad we can continue with their development while buying in players we lack atm.

Is his coaching staff announced?

I am happy that Arteta will continue each moment with Gunner Freddie and find the right combinations and moments on the pitch for the players both in first halves and second halves of matches.

Mustafi starting with a clean sheet?!

Eh what?
Reply to  Goo-nerd

Somewhat surprised but really happy about this. Their ideologies seem aligned. Both intelligent guys who talk well and REALLY care about this club. Also both young and very driven. I think it’s potentially a great combination

I hope the players will take the most out of the chance given to them. Let’s turn the page now! COYG!!!

Really like Ljungberg and so glad he will be sticking around, he deserves the chance to remain and think he can be a huge part of the rebuild under Arteta at Arsenal.

Arteta had to leave Man City and Guardiola to achieve his dreams. I do not think Freddie was dreaming about being No 3.

No harm having him continue as an assistant coach to learn the trade.

He did what he could feeling his way in the dark as caretaker.