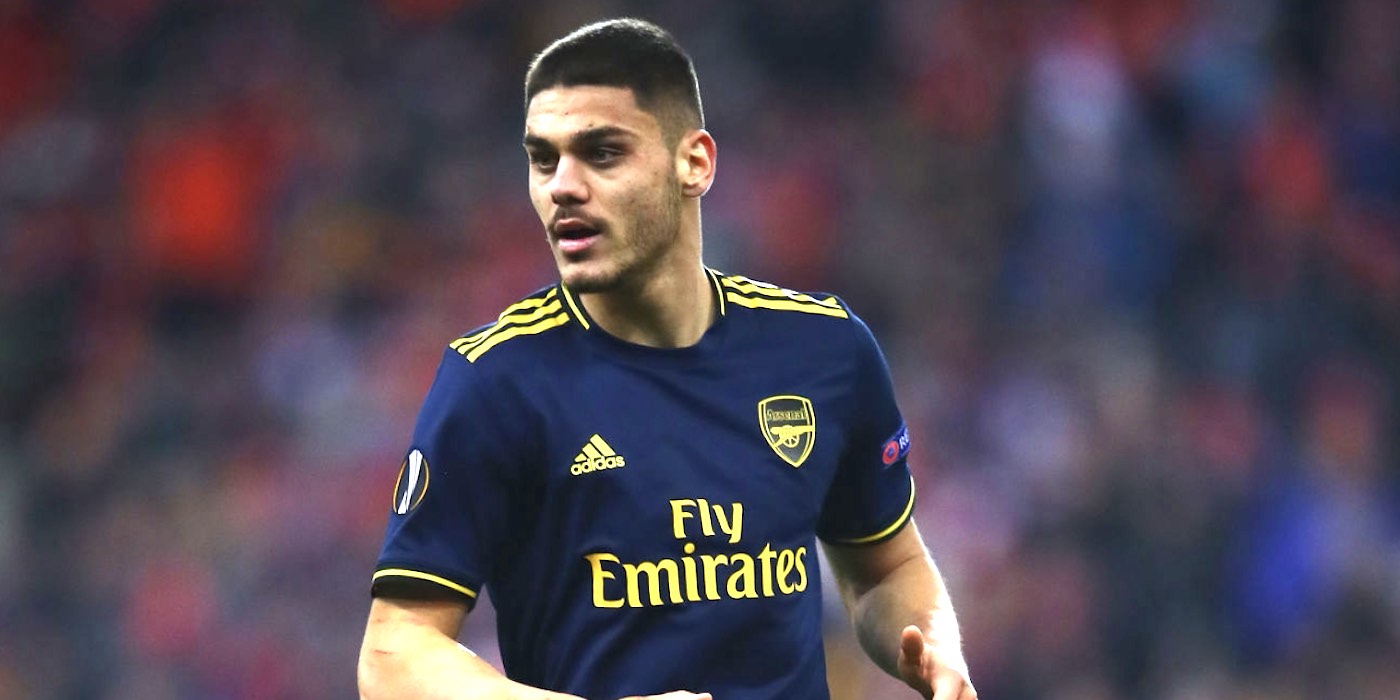 Via Sport Witness come reports from Greece linking Dinos Mavropanos with a move to Championship side Nottingham Forest.

There’s also interest from Olympiacos apparently, and while the Greek side are prepared to take the 22 year old loan, there’s no specific information on whether Forest are prepared to do likewise.

It would make more sense for the defender to leave on a temporary basis – not least because Arsenal might have a more valuable asset on their hands if they decide to sell in the summer.

He might also develop with some regular football, something he hasn’t had since joining the Gunners in January 2018.

In two injury hit years, he’s made just eight first team appearances, and this season has only featured once – playing 90 minutes in the 2-2 draw with Standard Liege earlier this month.

Centre-half is a problem position for Arsenal right now, but expecting someone who has played so little to come in and solve our problems is unrealistic.

At the very least he needs to play with greater frequency to aid his development, but it remains to be seen if Arsenal have made their minds up on him already.

I would honestly rather we got rid of a senior centre-back at this point.

Nobody in the world wants to buy any of our senior CBs.

Good luck to him, he desperately needs game time to ward off any further stagnation. If he gets it at Forest and it goes well it can only be a win for us, bringing back a more experienced and more confident player who could develop further with us or fetch a nice transfer fee abroad.

Hard to tell what to make of him, though we bought him at a time when we needed to invest in a world class defender. Not his fault but the strategy of going for cheaper defenders clearly hasn’t worked.

There is no question he has stagnated at Arsenal. For his own good, he needs to play to see where he is and what he needs to work on in his game. I had very high hope for him and bielik.

I have no idea if he has stagnated, improved, or gotten worse at Arsenal; I don’t see how anyone can know. A Championship loan makes a lot of sense to find out his quality.

He has the potential to be a good defender. However the lack of competitive football he has played over the last 2 years has made him look terrible. He needs a loan desperately. Forest would be a good move for him

As Mustafi said in an interview, the quota of mistakes is very small for a defender: While an attacker gets two, three new chances when he misses, and still might leave the stadium as the hero of the day, the team is harshly punished for one minor defense lapse. Hence, it is very hard to gradually ease new defenders into the team, particularly central defenders. Willock, Saka, Smith Rowe and Nelson can get minutes, running around more or less purposefully, but Mavropanos can not. He must be perfect from the start. All top teams tend to think the same way.… Read more »

This is true and it frustrates me quite a bit. Especially when our “experienced” defenders are making just as many mistakes.

Why not throw your young guys on and give them a solid run of games and see what eventuates? Defending after all is about communication and building a partnership with someone and we never give our young guys the chance to do so.

I never quite understood that. I could forgive mistakes at the back of I saw something developing long-term.

The links to both clubs makes sense as Olympiakos owner bought Nottingham Forest 2-3 years ago. Which means it may be that Olympiakos are looking for a permanent deal whilst loaning him immediately out to Forest for experience/game time. However I’d rather Arsenal sent him on loan instead of a sale as there’s something about him which I like. I think he’s just low on confidence and not fully recovered from the few injuries in quick succession. New contract & 1-2 good loans and re evaluate then whether to sell or keep.

Agree. He’s probably on very low wages and we will surely be able to get in a couple of millions if we decide to sell in 1/2 years so the risk is actually non existent.

Not sure what to feel about this move. Non of our defenders look good enough at the moment to make me think we’ll regret letting them go. If selling him means we raise funds for a true beast at the back, no-nonsense center back then I’m onboard.

Really? Remember his Man Utd debut? Agree to disagree. He needs a loan kods got quality

Desperately needs a loan or move

The rumour was that we wanted him to go on loan this season but he wasn’t keen. He’s been getting fairly regular playing time with the U23s and to be honest from what I’ve seen of him that’s his current level…a pity because when he first came to the club we thought he could be the answer to some of our defensive problems. Injury and lack of confidence throughout the squad have not helped him at all.

Get rid, he’s done nothing to show why we signed him. Stick a sell on clause in just in case and move on

He could do with a loan to the Championship for the rest of the season. That would provide a steep learning curve. In the meantime I would like us to sell Luiz, Sokratis and Mustafi for some magic beans and bring in Chris Samba from the top of the beanstalk to just stand in front of the goal.

Mustafi might have used all of his relase cards by now. But Luiz and Sokratis are good. They just need a defensive system, any system, really, to adapt to.

Considering our current situation with central defenders, it doesn’t make that much sense to get rid of him permanently when he really hasn’t had a chance to get a good run of games due to injury.

Throw in the fact he is on fairly low wages I just think it’s worth a punt to keep him on the books and send him out on loan, quality defenders are how to find and he might be one, given the opportunity, we just don’t know yet. He is not breaking the bank.

Give Dinos a chance at Arsenal. He needs games.