After three matches where Arsenal dominated the first half, the first half of this match was bad. Luckily for Arsenal, Emiliano Martínez was up to the task and saved all 5 shots that Leeds got on target in the first half to get Arsenal to the half time break even at 0-0. From the start of the second half Arsenal looked like a different team and blew away Leeds and came away deserved winners (even if they probably didn’t deserve to keep the clean sheet).

Arsenal have two wins and two clean sheets on the bounce. Things are looking good and the players look like they are buying into what Arteta is trying to sell.

Arsenal 1-0 Leeds United: By the graphs 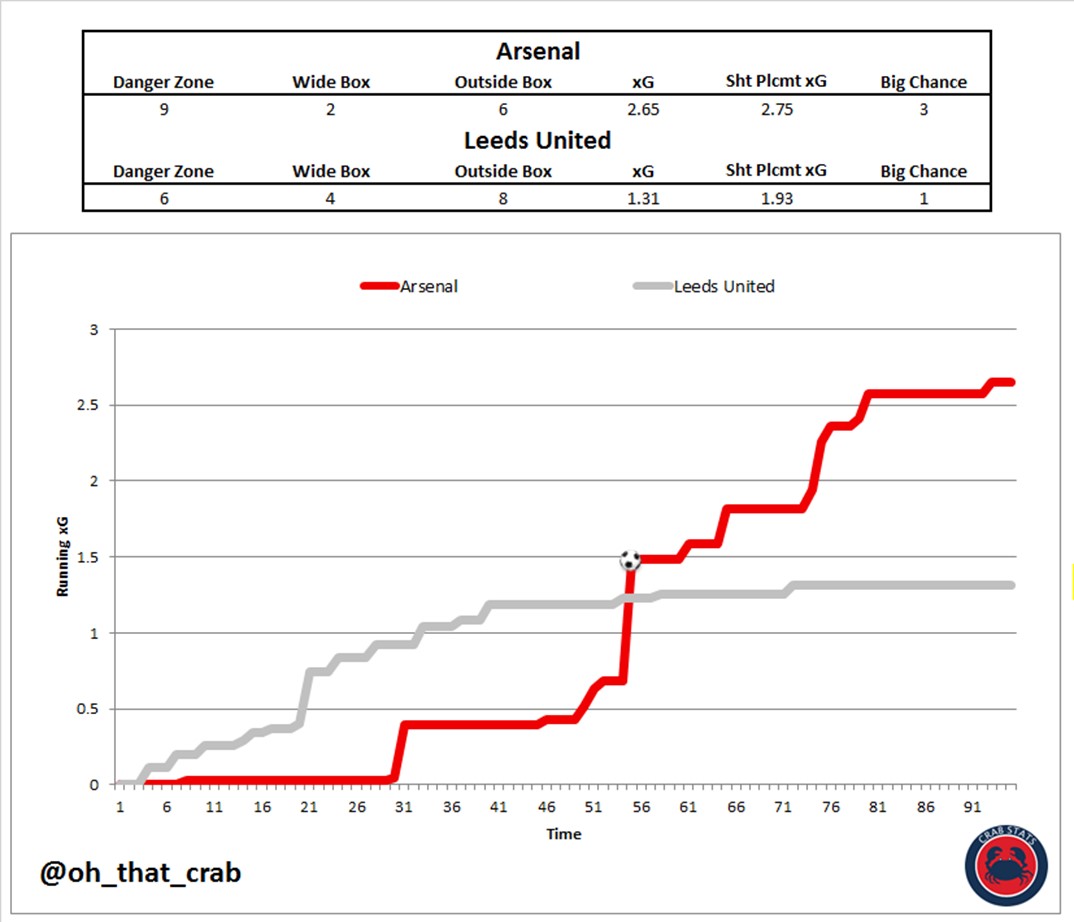 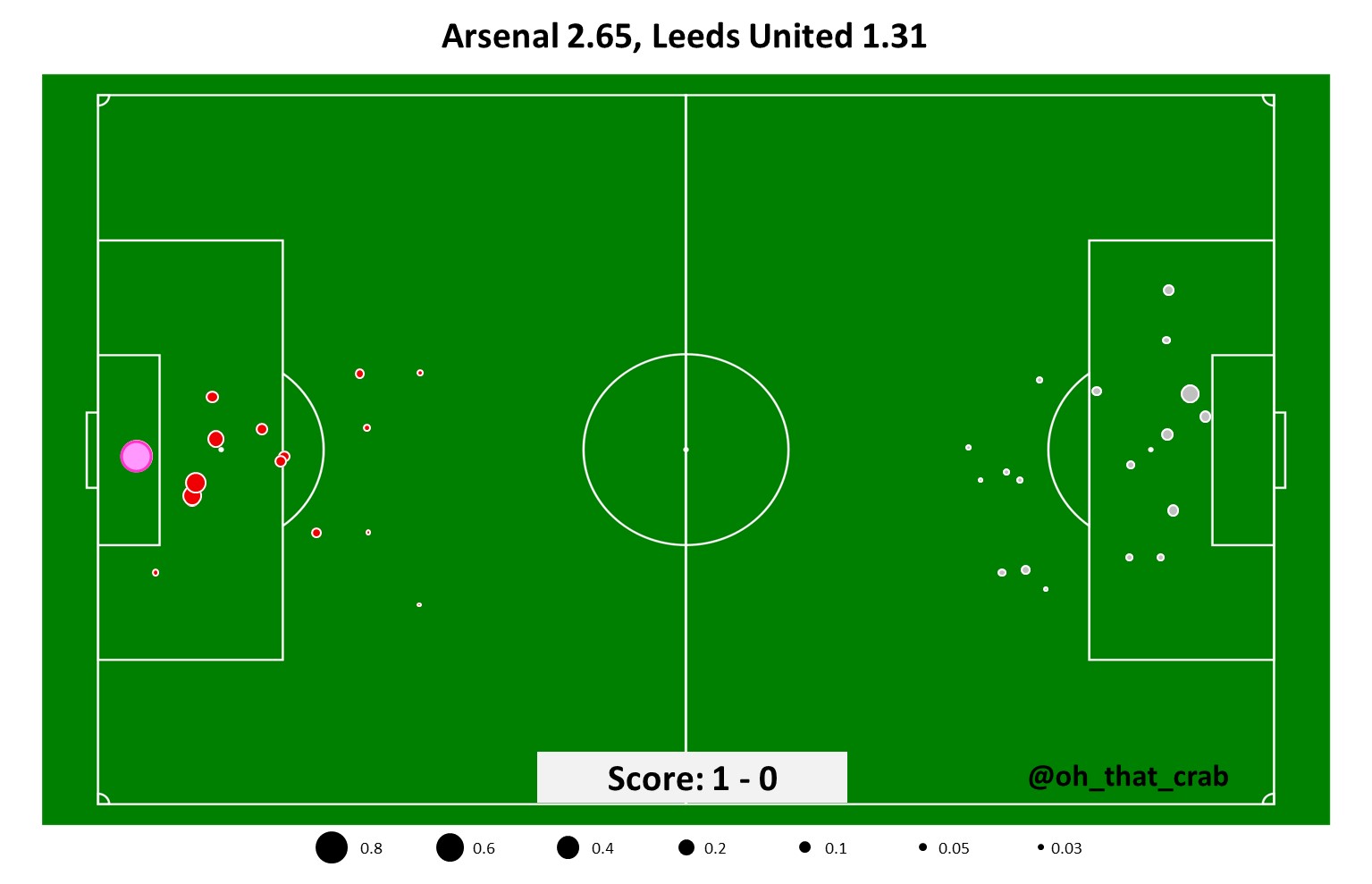 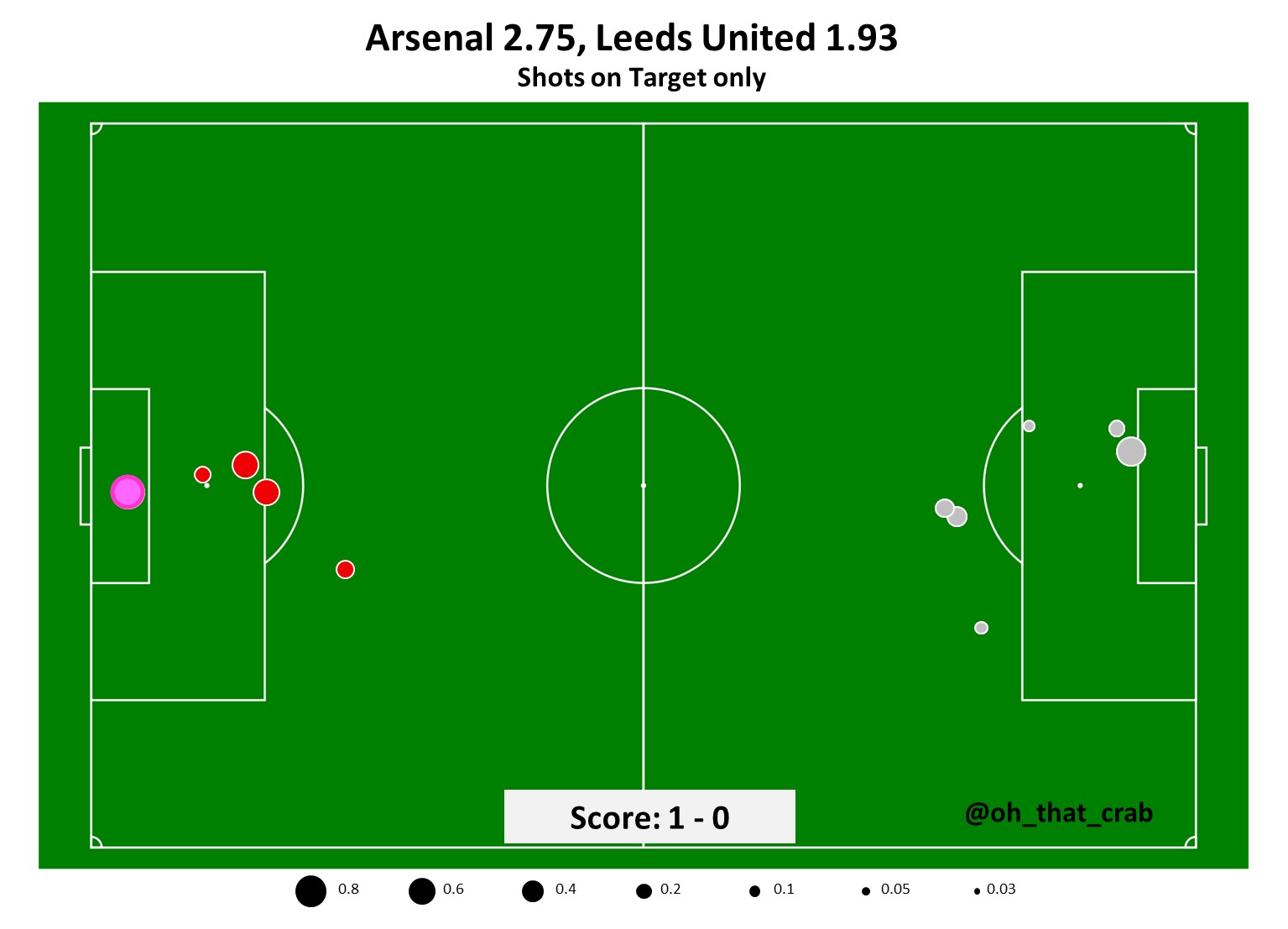 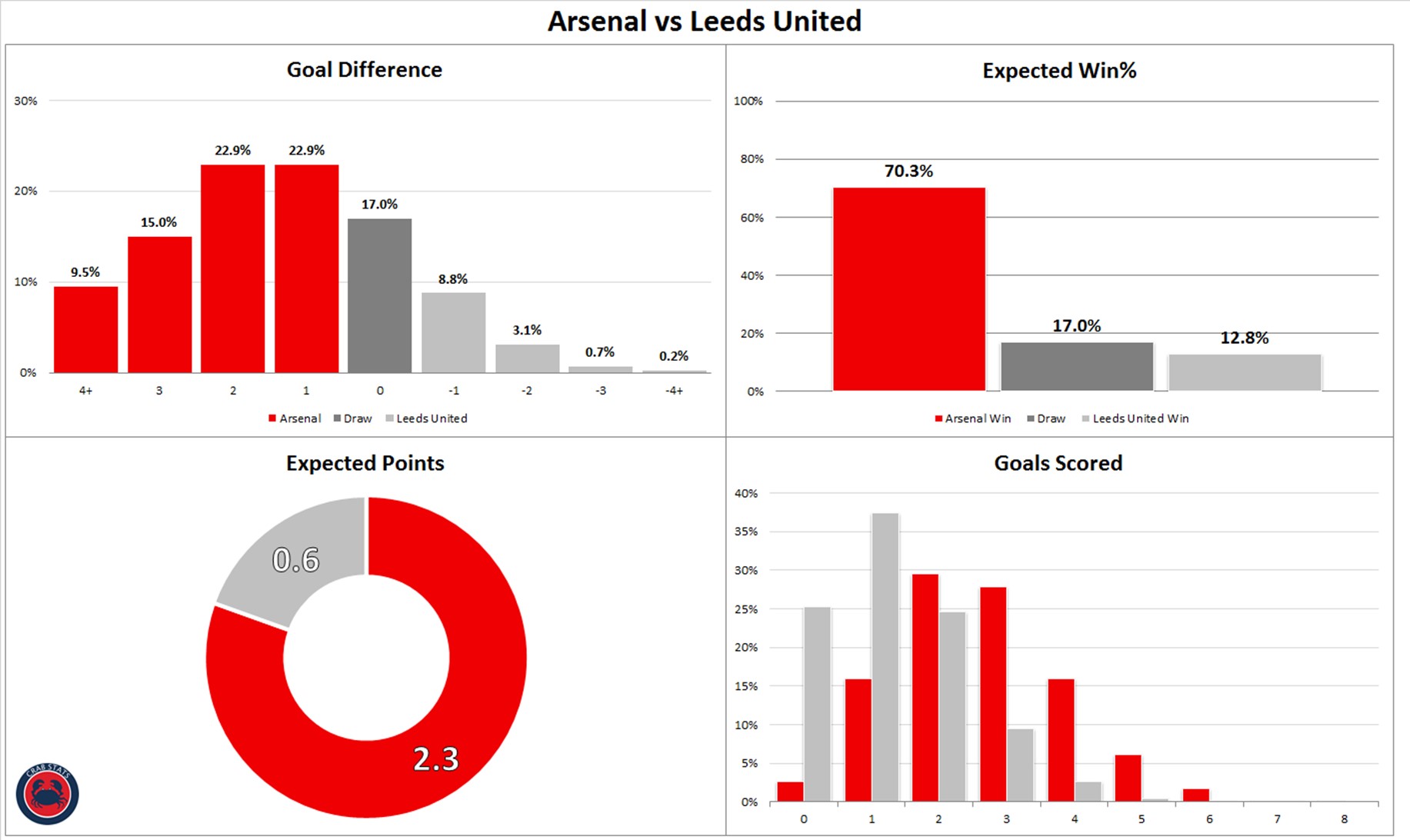 -12 – The shot difference from the first half, Leeds had 15 shots to 3 for Arsenal

-16 – The difference in touches in the box in the first half, Leeds had 22 to 6 for Arsenal

-75 – The difference in final third touches in the first half, Leeds had 111 to 36 for Arsenal

10 – The shot difference from the second half, Leeds had 3 shots to 13 for Arsenal

18 – The difference in touches in the box in the second half, Leeds had 5 to 23 for Arsenal

113 – The difference in final third touches in the second half, Leeds had 42 to 155 for Arsenal

It’s pretty cliche to say a match is a tale of two halves, but cliches are cliches for a reason because sometimes they describe what you see perfectly.

Arsenal looked like they expected something completely different from Leeds then what they ended up getting. Leeds were not overawed by coming to a Premier League ground and didn’t set up like an underdog bunkering down. Instead they pressed high, man marked Arsenal’s midfield and forced a number of errors that led to dangerous shots. Mikel Arteta was visibly upset with his team and according to Alexandre Lacazette let the players know it at half time.

In the second half, Arsenal looked a lot more like the teams that we have seen over the frist three matches of the Arteta era and came away with the winning goal in the end.

Matteo Guendouzi shines in the second half

2 – Passes in the box completed, tied for 3rd among all players

2 – Interceptions, 2nd among all players

3 – Successful dribbled, tied for most among all players

The less said about the first half the better, with the response from the team I am willing to write it off as a blip. With the change in performance, no one else better personified the extra intensity that the team showed than Matteo Guendouzi. He showed good discipline in the positions that he took up in midfield, while also seeming to be just about everywhere that Arsenal needed a player. It had been a rough couple outings as he doesn’t seem to be an automatic starter under Arteta but in the second half he showed he has the talent and the ability to provide what Arteta wants in his system.

Sokratis does a job at right back

2 – Successful dribbles (who knew he had it in him!)

3 – Dispossessed (not a right back red flag)

Sokratis isn’t a right back. When the lineups were announced, everyone assumed that Arsenal would be in a back three, but nope it was a back three and Sokratis was asked to play out of position. The first half was a disaster and I thought that for sure that Arteta would have to make a change but Sokratis surprised me (I am probably not the only one) and ended up doing a job out of position. It wasn’t pretty but he ended up with doing a job that wasn’t a disaster and after the first half that was an accomplishment. I hope we never have to see this happen again.

Previous articleLacazette: Arteta shouted a lot at half-time
Next articleAngry Arteta told us to show ‘animal side’

Turner: We learn from it and move...

Arteta: In big moments, you have to...

Thanks for the analysis, Scott. I thought the xG differential in the first half may have been even worse for us. Thankfully (and as the stats suggest), we completely turned it around in the second half.

Sokratis more than did a job for us on the right. As you mention, hopefully we don’t have to play him out of his natural position in the future, but boy did I enjoy those dribbles!

Matteo was truly everywhere in that second half. There’s a real gem in there. I really hope he gets there.

Not great, but not as bad as I perceived. I suppose that’s perhaps due to how bad the obviously misplaced passes were and the areas he was giving the ball away in.

Any idea on how that was split by half? He seemed more assured second half.

This Must Be The Place
Reply to  Scott Willis

Is there a half by half breakdown or similar. He looked so rusty in opening 30 minutes, it would be interesting to see how he improved as the match went on

Great analysis Scott.Thought Emery had entered the building after first 45.Well done to the manager,coaching staff,players for the second half performance.

Juvenile I know, but ‘deep completion’ elicits a chuckle. Excellent analysis as always!

I think in the first half our back line was sitting too deep, leaving big spaces between the lines. No surprise when you’re not a right back like Sokratis or when you’ve had a couple of poor touches like Holding had in the first minutes of the game. I was literally screaming at my TV for them to get further up the pitch.

Okay I have googled it and educated myself now! As you were.