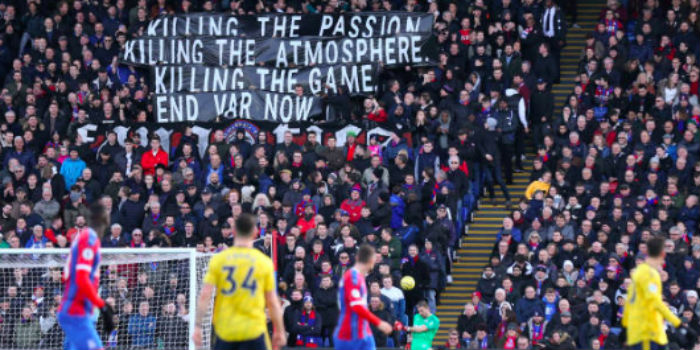 Mikel Arteta says he still supports the use of VAR and believes the way it is implemented will improve in time despite its obvious teething problems this season.

The way VAR has been used to rule on handball, offside decisions, penalty calls and fouls in the build-up to goals has regularly provoked debate since the technology was introduced by the Premier League in August.

That supporters in the stadium have often been left in the dark about consultations between on-field officials and those in Stockley Park has also caused frustration.

Indeed, a small number of Crystal Palace fans held up a banner that read ‘Killing the Passion. Killing the Atmosphere. Killing the Game. End VAR Now’ during today’s 1-1 draw with Arsenal.

Somewhat ironically, their side went on to benefit from its use when a yellow card for Pierre-Emerick Aubameyang was upgraded to a red after his bad tackle on Max Meyer was reviewed.

Asked about the situation, Arteta said: “I think it will get to the point that we all want.

“It’s still a process where it’s true that sometimes it breaks everything up, but for the big decisions it’s important to have it.

“It’s in place at the moment, we have to respect the decisions and then hopefully it will make more positive than negative decisions.”

Arteta was also quick to admit that Aubameyang’s tackle on Meyer was deserving of a sending off.

“I just watched it and it looked nasty, to be fair,” he said. “Knowing Auba, there’s no intention to make such a tackle. Hopefully he hasn’t been injured and we are sorry for that. The decision was made and we have to accept it. ”

We’ll now be without our top scorer for three games; a huge potential problem for a team that has so heavily relied on the Gabon international to hit the back of the net this term.

Just use Auba to score goals, don’t push him to defend as well. We know he is a committed pro, but we shouldn’t be making use of our top goal scorer to defend.

Where does that argument begin and end? Today you can say ‘don’t make auba defend’, tomorrow that could extend to the other forwards too. This day and age in the PL, if you want to get somewhere meaningful come April end, the entire team has to defend and attack together.

Really killed the game… but not for the Palace fans ironically.

And frankly there was zero need to check VAR for that sort of decisions.

Killed the game for us yesterday. For sure it did.
Didn’t kill the atmosphere interestingly, because I think our fans and players were pretty riled up.

VAR is a nightmare and it’s killing football. Football is a drama, a performance that is being ruined by the idiots at Stockley Park. When a goal is scored it should stand; not be cancelled out by some plonker with a monitor. Football is not cricket: VAR has no place in it.

100% agree with your statement. I would add it is human and therefore flawed. A live show that need to keep its fluidity.

A team can lose the title or top four and the added revenue of 25 millions or whatever due to referee errors. This is why VAR is very important.

There is a lot at stake. This is not Blud Bruvvas league.

Rubbish! VAR should have been brought in years ago. Imagine if it were around when Arsene Wenger was our manager. We’d have won some many more league titles, and Ferguson would have been mid-table. Instead, we got screwed in 07/08, 10/11, that penalty at Watford which Troy Deeney covered up with his cojones bullshit, the screwjob at Newcastle when we were 4-0 up, and then our idiot supporters turned on the greatest legend in our club’s history. But simpletons will never understand the value of any progress that is remotely complicated.

Goal line technology is simple, fast and accurate. VAR is the total opposite on all three of those points.

Ditch VAR now. Otherwise just tell me the score afterwards and I’ll decide if the game is worth watching. Like my old undies, it’s a teal passion killer

Martin
Reply to  Supporter since 1970

Don’t be ridiculous. Why ditch VAR which has been a great success all over the world since it has been in use. It has made the game so much fairer and even though the Premier League haven’t learned to use it properly it has caused far less mistakes

gooner
Reply to  Supporter since 1970

I think we tend to be quick to hate VAR. watch the Bundesliga for example and see how helpful the technology is. Look at how our equaliser away to United was ridiculously called offside, as if Fergusson was still coaching them. VAR is just like the whistle or the line man’s flag. How they use it or in the case of the Premier league is the issue. Why wasn’t the savage foul on Pepe at west ham checked? it was as bad as the Auba red yesterday and with a malicious intention. Can’t blame VAR for that. it’s the cunts… Read more »

Paul Roberts
Reply to  Supporter since 1970

Did you really have to mention your “old undies” to get your point across?? 🙂

Luther
Reply to  Supporter since 1970

It’s not VAR’s fault that it’s being used by idiots. If there are loads of car accidents, would you ban cars? Or would you ban bad drivers? Come on man – stop being so simple.

As I said in an earlier.pist. Obviously the FA never wanted VAR and as they were dragged kicking and screaming into the modern world they decided to set it up in such a way it will continue to fail. As the cries to get rid of it will grow louder they’ll eventually have enough “evidence” as to why it hadn’t worked and turn the clock back the good old days when fools like Mike Dean can once again reign supreme.

It works in other leagues. Who does England have to be so awkward all the time?

We could call posts “pists” if the poster was pissed? Just a thought. 🙂

Or if it’s the policeman from Allo Allo.

ESPN and tghe London School of Economics did a “luck” study which basically stated what the league table would look like if refereeing decisions were correct.
The one major change was Arsenal who were robbed of nine points and five places in the league because of VAR and refereeing decisions.
VAR is a disaster – Arteta was just being diplomatic.
PEA deserved to be sent off though yesterday and I don’t believe he was at all bothered about it.
He will be gone in the summer so its a couple of weeks off for him…

VAR will come good it just has teething problems … and l agree the EPL are just reluctantly going ahead with it because all the other major leagues have and it was becoming embarrassing…l remember about 10 yrs ago a team giot relegated due to an incorrect decision that’s just criminal…with VAR man united would not have won so many titles l tell ya the number of times “decisions just went their way ” was staggering! .. VAR just like Brexit or pressing in modern football is the future sadly…the people who sit and complain about it will lose whilst… Read more »

How dare you talk so much sense?! Couldn’t you have just gone along with the media narrative like a well-behaving sheep?

How bout the trashcan? Im more than satisfied with the goal line cam. Thats enough. Let the refs to the refeering.

VAR is not the problem; the people implementing it are the problem. It worked brilliantly in the World Cup – both men’s and women’s – and from what I hear, it’s working well in our other leagues. As always, it’s the English that fuck things up. I’m telling you now, they are deliberately misusing VAR so that they can win the argument against its use. They will say, “we tried video technology and we now know it does not work, so we will go back to the way things were before”, and stupid fans of all clubs will fall for… Read more »