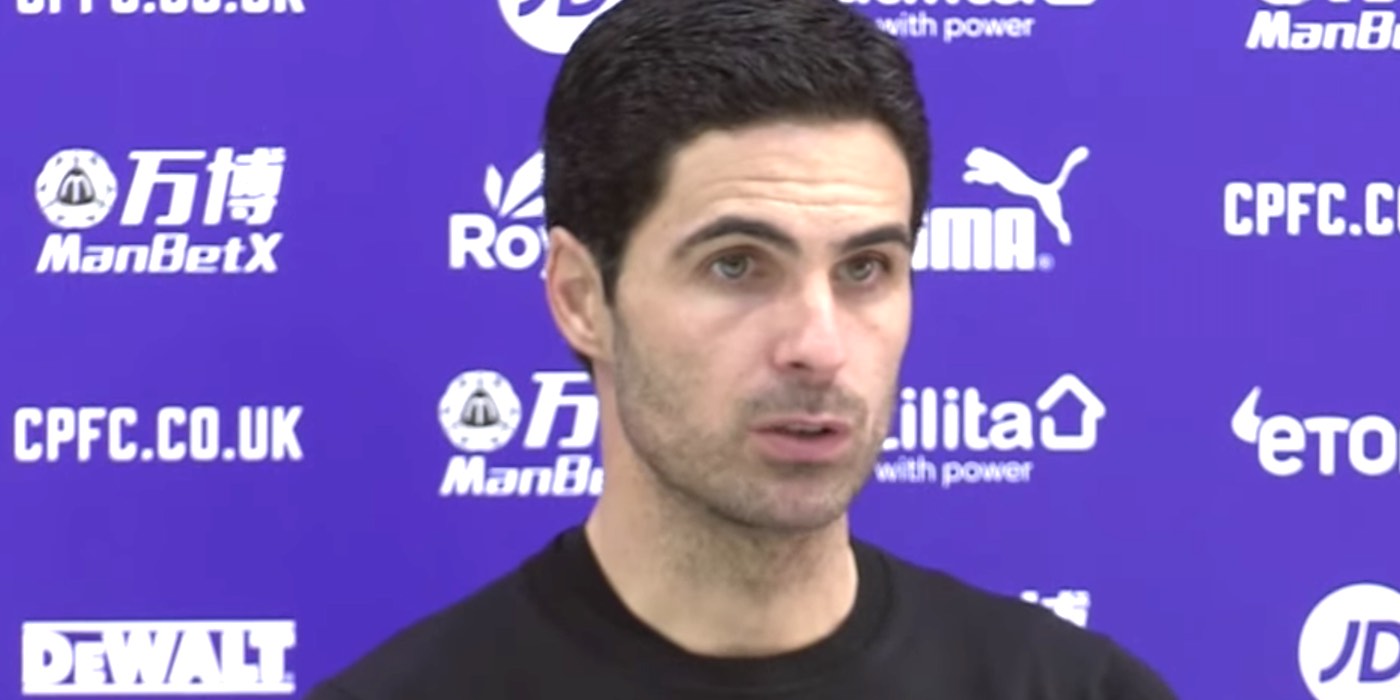 Mikel Arteta declared himself ‘very upset’ with the way Arsenal switched off ahead of the Crystal Palace equaliser at Selhurst Park today.

The home side took advantage of a lack of awareness, feeding the ball down the wing and then into the box, which led to Ayew’s shot deflecting in off the underside of David Luiz.

It was a rare moment of danger from Palace who have been goal shy this season, and in his post-match press conference the manager’s frustration was still evident.

“At this level in the Premier League, if you switch off for two seconds, five seconds, you will concede a goal straight away,” he said.

“I’m going to have to find a way to try to avoid those situations. It happened today and it cost us two points.

“We completely switched off and allowed them to put the cross in. We turned and conceded the deflection, and I was very disappointed with that.”

However, Arteta was pleased with the response of his players after going down to 10 men following Pierre-Emerick Aubameyang’s red card.

“The reaction was really, really positive and they wanted to win the game. They went for it and we had three or four really good situations. We created the best chance with Nico and Laca.

“We were unlucky not to win the game.”

How did the players rate for you today? Check out Crystal Palace 1-1 Arsenal player ratings

Can’t say fairer than that

Right Across Sunderland!
Reply to  Russ

Well, you can’t say fairer than that then.

Ali
Reply to  Right Across Sunderland!

…but how did he communicate his predicament to the doctor? ?

I’m really looking forward to seeing how he sculpts Saliba into the defender he wants him to be. He obviously has a clear vision of what he wants and needs from his defence and to be fair, Sokratis and Luiz are kind of old dogs to be learning new tricks.

Perhaps with Holding and Saliba he can mould defenders who fit his game plan and are contemporary answers to our ongoing defensive calamities.

Laca has to find his finishing boots now that auba is gone. I doubt martinelli would start ahead of Nelson/saka at the flanks so it’s all on laca.

Gabi starts ahead of either of them all day.. boy’s special and ready for first XI

What Pakgooner said, Martinelli is ahead of both of them right now, kid remind me of a mix between RvP and Alexis, kid is gonna be big for us, and he have the right attitude

I was almost (almost!) hoping that the spuds would beat LiVARpool to protect our invincible status (and keep the record of the longest unbeaten run).

I stupidly forgot that Spurs never win a game if we’d like them too. Or (like today in my case) when I’m close to neutral.

The spuds were so negative it was untrue. Even for Maureen that was ridiculously defensive
Still, fuck Spurs.

Lacazette has cost us alot of points received you. Not at the races goalscoring wise for a while now.

Sorry but who made the millimetred pass to Auba? Ozil the ghost?

SharpasFc
Reply to  The Arsenal

Don’t call yourself “The Arsenal” if you don’t understand Laca’s role!

The Arsenal
Reply to  SharpasFc

When did I say his game play was poor? I said he has been poor of goal…true or not.

I just don’t get the patriotism. He’s a number 9 for crying out loud. His role is to score goals! Every other thing is secondary. Blimey!
Look at his goal tally even before this season.

Nairo254gunna
Reply to  The Arsenal

I think Laca has been brilliant. Defending from the front, really hassling and hustling to stop opposition attacks before they become a bigger threat. He may not be scoring but his work rate at the front is commendable and I can not wait for the goals to come because it looks like in their absence he has been working on other elements of his game. So when the goals come he will just be a more complete, better player.

He’s a little bit like Firmino, you can’t sum up his contribution with goals alone. He works incredibly hard for the team both pressing and tracking back, then he brings others into play like for Auba’s goal. And sometimes he can score from nothing at all. Not having the best time in front of goal at the moment but he’s a very good player, the goals will come.

I completely understand that, and as I mentioned, I don’t doubt his work rate. Hopefully the goals will come as you are saying, but he needs to fire on all cylinders. Right now, he is incredible in defense and linking up play. The only bit remaining is what he is best at – scoring goals. And goals are what will win us games. A good defense will keep us from losing, but an effective attack will win us the games. By scoring goals.

We are a team of one half. Yet to sustain consistency over 90 minutes. Which is why I cautioned some people here who ere foolish enough to believe we are very different under Arteta. We are responding and doing some things right but we’ve been here before. Wins against Chelsea late Wenger reign some impressive unbeaten runs followed by slumps. Same with Emery, wins over Spurs impressive run followed by slumps. We simply have never been able to sustain consistency. Part of this is down to lack of proper investment in key areas, preferring instead (Under Mslintat than Sanlehi) heavy… Read more »

We are a team of one half. Nothing wrong with that after 5 games of Arteta being manager because we can see what is being worked towards and that is becoming a team of 2 halves. There is a clear style of play. You can not expect these players to be thriving under their new expectations and the clear heavy demands being asked of them after 5 games.

Please, give this project time Santori and stop with the needless negativity and stop problematizing everything.

Really do people just vote this Dude down because he writes long replies,if we lose Xhaka and Torreira, we are screwed,seems a sensible suggestion to say we need to have extra support in midfield.
To play the way Arteta wants takes a season to get the fitness levels up,a short term loan will have more bodies to fill the gaps, otherwise we just rely on the kids.
Would really be interested to hear the thoughts of the 28 people who downvoted this lads post.

Just to say we r likely to continue to struggle to creep back up to the top. Many fans like to delude themselves and see positives which there are but are they enough. Frankly as a club we do not have the patience to build again following so many false dawns. We have now Klopp, Pep and Moanrinho in the league, ex-player brigade in Lampard and Ole plus then Wolves and Sheffield, not to mention resurgent Leicester. Meanwhile we are struggling to go over Palace and are mid-table. Everton are just behind us with Ancelotti. Again as I said its… Read more »