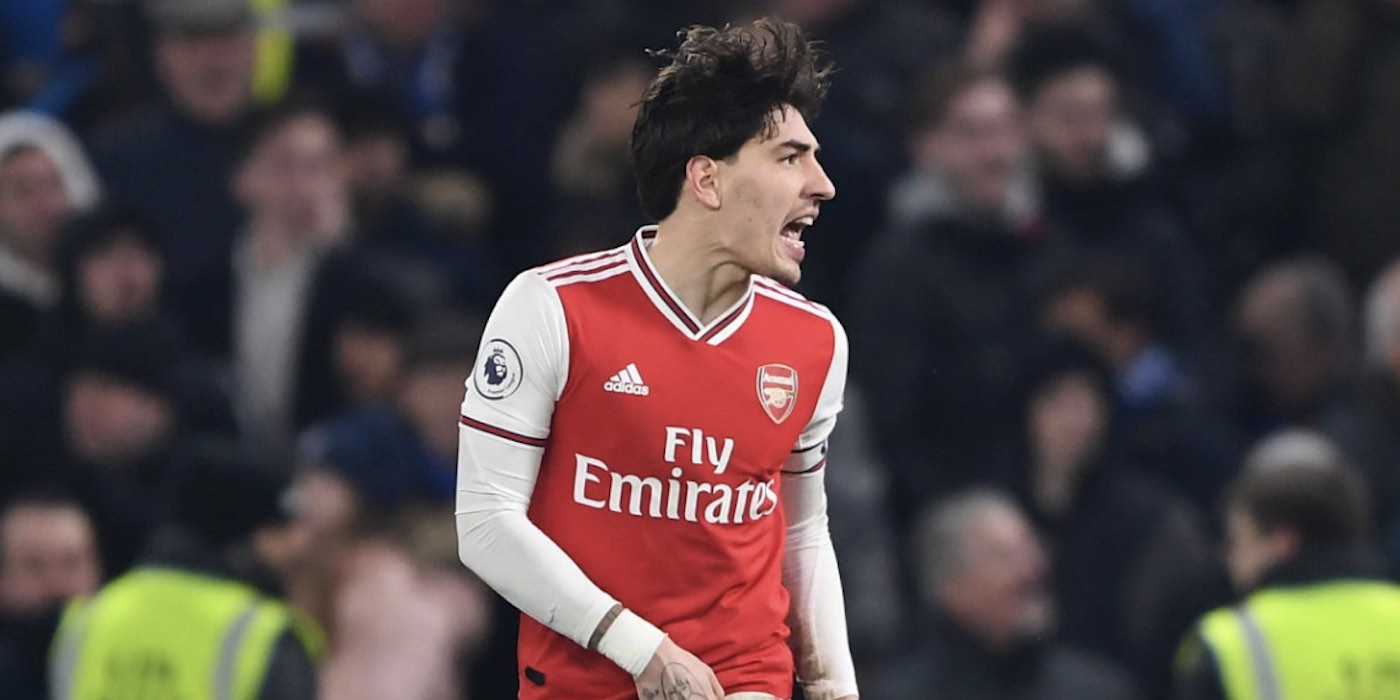 Hector Bellerin’s last appearance for Arsenal came in early December, so to take to the field at Stamford Bridge to face Chelsea was always going to be a challenge.

The right back, and captain on the night, was more than up for it though, and it was his late equaliser which grabbed us the point our spirited 10 man performance deserved, as we drew 2-2 (report and goal clips here).

It’s not the first time he’s done that either – a couple of seasons ago at the Emirates he scored a late goal to rescue another 2-2 draw, and afterwards on Twitter the Spaniard expressed his delight with the performance of the team, and his contribution to the result.

“Always happy to score against these lot,” he said. “But what truly made me happy, was everyone fighting for their lives on that pitch.

Bellerin also drew praise from Mikel Arteta who felt his character epitomised the spine his team showed this evening.

“I asked Hector if he was going to be ready for today and his first answer was, ‘boss, I’m ready, so let’s go.’

“These things happen in football. When you want to play, you enjoy your profession and good moments come.”

Check out Chelsea 2-2 Arsenal player ratings – and rate the players yourself.

I’ve never hated anyone more than azpilicueta and these jorginho, Hudson odoi losers. No doubt Chelsea have good youngsters but hopefully ours like saka, Nelson, martinelli overshadow them in years to come.

As much as I dislike Chelsea, no team is more dis-likeable then a team that contains Danny Rose, Dele Alli & Harry Kane!!!

Long may their losing continue!

The smugness of both azipilequeta and jorginho pissed me right off, but oh how good did it feel to celebrate in their disappointment when Belllerin’s goal went in, and at the final whistle.
https://tenor.com/view/home-alone2-smiling-gif-8688663

A couple of years ago……did I mention it !!

Funny story: i have a friend who’s a leeds fan, played in the same sunday league team and he gave it the biggun about how it wasn’t a foul and Bellerin had to be stronger, he’s weak etc etc…. next sunday…he gets smashed in the face with an elbow by a towering opposing player who scores a header from a corner, it was IDENTICAL and he was fuming all the way home in the car and i turned around and told him it wasn’t a foul and he had to b stronger and that he is weak haha.

If it makes you feel better, Ospina bulldozed Oscar at the Emirates.

That’s my Hector. Staking his claim now to be full time captain next year. Though he’s already captain in my heart. ?

Fabulous to see not only the drive and determination last night, but how much belief and energy it seems to have given to the club and supporters alike. COYG!

My slight concern is watching Pepe’s defensive work over the watchful eye of arteta, I’m not sure he’s got it in him to pull a shift in defence as is often expected in this league. Perhaps better backup in midfield (ie not pairing ozil on the same wing) might help with this

Wasn’t a fan of Ozil playing on that right at all. He’s looked much Berger linking with Saka and Martinelli on the left.

Right, after that fightback, result, and show of character from the team – against those mugs at the fulham bustop, that’s just what I was worrying about ….

Priceless the look of Azpilecuetta when we equalised.

That thumping clearing header (following instructions to Martinelli where to stand to anticipate it) to (sort of) make amends for his first half stupidity, then our captain one upping theirs.

Good feeling with the fans. Slate them but they were really good today the away fans AFTV the lot.

Hope we can carry the positives for Arteta and start to climb out of tenth. We need results now.

But great feeling at the moment.

Not sure why this got so many down votes: short, no arrogance, pretty positive. We should encourage these.

Homer
Reply to  A Different George

Nah. Any reference to those AFTV twats is an automatic thumbs down.

When the line-ups came yesterday, there was a lot of clamouring and wailing about how Bellerin would not be good enough and how Arteta was betraying AMN. (And some really weird comments about someone who’s interested in fashion can’t be the team captain – have those people seen Auba’s taste in clothes and cars..?)

That’s how you respond to such stupid crap.

He Bellerined it into the net. What a cultured left foot.

Hector, we’re always happy when you score against that lot too.

seriously impressed by Hectors defensive performance, his blocking last night vs william was akin to a one man roman shield wall

‘these lot’ must be the new term we use for Chelshit going forward. Bellerin has spoken.

This is the way.

Aside from Asspissculeta, their ball boy was a right twat as well. Would have loved to have seen his sorry face following our captain out doing theirs. I only wish we nicked it even, that would have been the real icing. We need to think that as much as we are still in 10th, they are not that much further away from us and we can catch them in the table. Hopefully injury to Abraham, this morale sapping defeat might make them slip up a couple more games. We have 3 in front of us we NEED to win. And… Read more »

Have been critical of Bellerin all season.
I will now, gladly, eat my hat. And shoe.

I just love this guy. His playing ability and his personality. He is the personification of an Arsenal player and a testament to our club. I hope against hope he gets an injury free run and regains his status as the best RB in the league. I like AMN a lot too. He’s a bit rough around the edges and not an elite player, but he is by all means a top top Premier League player. I hope he doesn’t get disillusioned by losing automatic first team selection. I think he can be an invaluable utility player to the club… Read more »