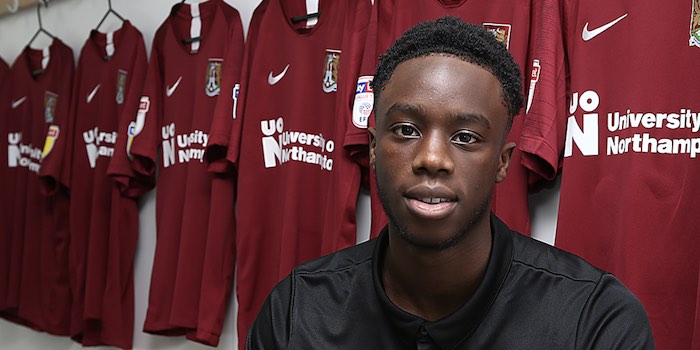 Arsenal have announced that James Olayinka has joined Northampton Town on loan.

The 19 year old, who took part in last season’s pre-season tour, will spend the rest of this campaign with the League Two side.

The Cobblers sit sixth in the league right now, and the rangy midfielder will help them as they continue their push for a play-off place.

Speaking about the signing, Northampton boss Keith Curle said, “James is a dynamic midfielder who we saw play well against us earlier in the season.

“He is box to box, he has a lot of energy, he creates chances, he scores goals and he doesn’t mind a tackle either.

“He can hunt the ball down and he enjoys the competitive side of the game.”

While Olayinka himself said, “I’m excited to play some football and get a taste of playing in the league to gain more experience.

“Northampton are a good team and are doing well in the league. The manager wants to play attacking football and score lots of goals, so hopefully I can help with that.”

Best of luck to him there, and he joins the growing collection of Arsenal players out on loan right now.

Arsenal players out on loan 2020

As a Northampton based Arsenal fan, this is exciting stuff! I still remember Paul Rodgers, the last guy to also make this move. Hope James does a better job!

Heard a lot of good things about this lad. Hopefully he’ll play some regular football.

Any chance Folarin Balogun may go out on loan too? Kid seems way too talented to remain in our academy set-up. I’m sure plenty of European clubs will sniff around soon enough.

It’s good to see so many of these young players going out on loan. As long as they get plenty of game time, it will only be of benefit to both the players and our club. Either they do well enough to give the coaching staff something to think about ready for next season around our first team or they’ll put themselves in the shop window ready to play somewhere regularly and be a good professional player. Best of luck to young James during his spell with Northampton Town. I thought he looked like a good player when he played… Read more »