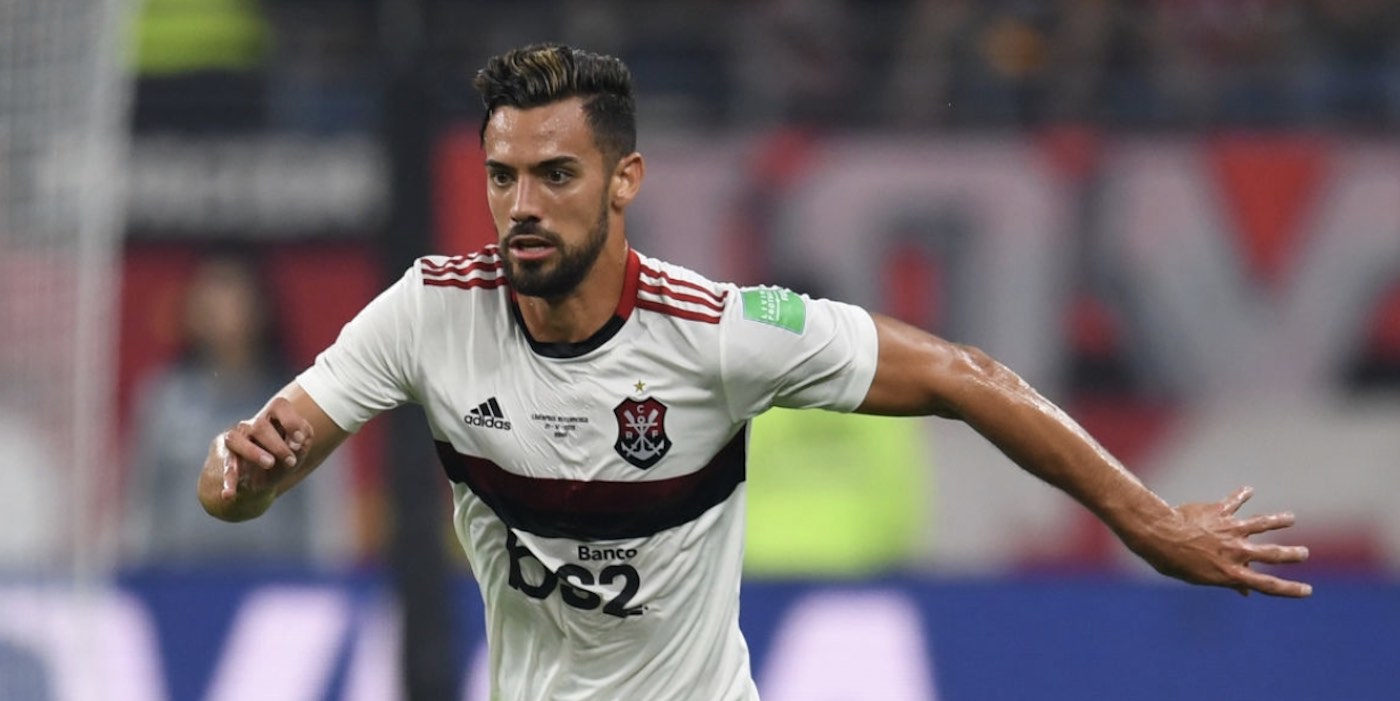 Various reports this morning suggest that Pablo Mari has returned to Brazil without completing his move from Flamengo to Arsenal.

The Spaniard arrived in London at the weekend and underwent a medical, but as yet no agreement has been made between the two clubs.

Sources suggest the plan was always for him to return to Rio, despite the fact he said his goodbyes to teammates last week.

Talks between Arsenal and Flamengo over Pablo Mari are "ongoing". Player was always due to return to Brazil.@TheAthleticUK

One of the stumbling blocks appears to be that Flamengo are insistent that the deal be permanent, whereas Arsenal are trying to take the player on loan at first with an obligation to buy.

Given that the Brazilian side would have had to give him permission to travel to England in the first place, the two parties can’t be that far apart in terms of an agreement, so it’s expected that the deal would be completed this week.

Is there another issue though? Could it possibly be a case that Arseblog News – having prepared a time-saving ‘Pablo Mari signs for Arsenal’ draft – have dropped a full-on Higuain on this signing?

The ways Arsenal are trying to complete Pablo Marí’s deal do not appeal to Flamengo, who has not agreed to sell the defender. The player underwent medical tests, passed, but had no agreement between the clubs for an outcome.

Another update here suggests that Arsenal have a ‘financial problem’, in that they can’t pay the €9m fee. Which might go some way to explaining why we’re trying to do a loan deal.

Arsenal: “Stay at home and save lives”

Hope you didn’t jinx it blogs!

Anybody know this player? Any good? Brazilian/Flamengo fans?

There are numerous exchanges under posts by Andrew (gunnerblog) and Charles Watts by Brazilian natives and Flamengo fans who say he’s top quality, changed their club, was key to their season and was dealing with Martinelli-like pace on the regular…. But it’s twitter, so who knows 🤷‍♂️

The only thing more consistently wrong than twitter, are Guardian columnists.

Martin, she’s not that good and The Guardian’s shit.

She doesn’t write for the Guardian anymore. Moved to the Athletic at the start of the season.

The God factor
Reply to  Grymelock

I feel it’s a bad signing for arsenal, I wish it doesn’t work out, don’t get me wrong every fan is always excited about new signing, but I feel he’s an average defender, and we currently have too many average defender’s, who are not consistent, cos consistency is what makes great defender’s, so in my opinion, let’s save the cash, add up in the summer and buy a world class defender, just like Liverpool did with van djik, Truth is, if we purchase this guy now, I don’t see us buying another defender in the summer

It seems that we do not have 9 millions at the moment and you’re still thinking about buying a worldclass defender in the summer.

He’s great, i’m from BR, and a Flamengo Fan, this guy is great!
So if he goes to Arsenal or not, for me, either way i’m happy hehe.
Here they say, that the negotiations had a setback, because flamengo wants a permanent deal.
The numbers they are saying, Arsenal should go for it, they say 7-9M, but for us, this is 35-45m
But i think he would be great at Arsenal

Thanks and perhaps we can do a swap. We also have a 35mill central defender for sale. Every wins right?

I’d still prefer if we got Rodrigo Caio, but…

How is it that we bring the player all the way over for a medical, when the two sides are reportedly 30 million apart in the valuation of the player. Ducking Arsenal.

There was me thinking there would be an announcement today, but of course not! We couldn’t have got this all sorted out in early January when the situation of needing a CB was exactly the same…

Yes, that’s a shame, and should be ASAP, because this guy still on a break, today is the day, that they should comeback, to start the pre season training

Clearly you have no understanding of basic fractions. As soon as he’s 26.5 he’s 27 for all intents and purposes. Except legally, but what do those smarmy lawyers know about maths?

Oh well, we still have Mustafi!! I know where the door is- don’t be too hard on me,
guys- just having a bad day..

Chillax mate. It made me laugh!

I’m not at all surprised

Haggling over a few bobs. Kroenke out. We’ve been hearing great things about this player in twitter to suggest that he might be an upgrade on mustafi. Any reason not to be a cold away from playing Mustafi is a good signing that we are in dire need of right now.

Yeah, because other clubs never try for the best deal possible.
Plenty of things to blame on Creepy Stan, this ain’t one of them.

Martin
Reply to  Me2

Monsieur Wenger wasn’t the only one dawdling over the fees. Gosh, what a surprise.

Ya Gooner
Reply to  Abhyuday Singh

Have you not learned yet, the board and higher ups hid behind our prof. They were luckyto have him for so long as were we.

Yeah, I’m surprised people still buy into that narrative after all this time. Wenger was far too honorable and gracious to do what he should’ve done many years ago, call the board out. It really hit home for me when Ray parlour said how angry wenger was with the board over the ridiculous suarez bid.

I am stunned that those running Arsenal could make a mess of anything. It’s beyond belief.

What is the difference between buying and loan-with-mandatory-purchase anyway? Is it just that the fee goes into a different financial year for FFP purposes or something?

That, and probably also “we’ll have our next paycheck by then”

A Gorilla
Reply to  Crash Fistfight

Arsenal get cold feet prior to entering Marí-ed life

Apparently Flemengo have said that they don’t want Mustafi in a cash plus player swap deal….

The “Arsenal cannot afford the 9m fee” part is really what’s offputting. I was under the impression that this was like a 2m deal… perhaps that was the loan cost? Regardless, not a good look for us this late in the window (having failed to improve the squad at all or spend any cash). Are Arsenal broke? Are Raul and his black book to blame?

Can’t afford the interest payments on a 9m loan for 5months. Shameful.

SHame, he looked a good defender and athletic for his height

Hope he surpasses my expectations but I think he is average.

9 million for this guy? He costs more than Mustafi!

There;s no point collecting a bunch of less than perfect Cback IMO. This chap did not make the grade at city and could not ply his trade in Spain. Yet some people are so deluded into willing themselves to believing anything new is an ‘upgrade’. I agree with the club that whilst this is somewhat low risk bc of price, we do not want to be saddled with a myriad unwanted players either should he not turn out to make the grade. We had players like Park ChuYong before, or Debuchy (injury prone issues) or Elneny or Jenkinson all brought… Read more »

I like the new “Read more” feature after the first few lines of the comment.
Very useful for a certain someone’s posts. 🙂

So in brief, you don’t agree with signing a
player you don’t know, which is now
looking as if it won’t happen.

But you’ve taken over 15 paragraphs to say it.

Oh my sweet lord man give it a rest

Its not about shiny new things. A number of south Americans on here have said what a great player he is.
Regardless of cost,at 9 million he
Could be a real bargain in todays
market, the worrying factor if true is
the fact we cant afford 9 million and
a team that needs major surgery to
really compete thats terrifying.

You can’t make this stuff up. Lol

On the plus side Arteta has at least changed the intensity shown in the team’s performances.
But if he was told that funds would be made available and now a quite trivial amount is not, then what is the impact on him and his views on both his job and the organisation he is in? Disillusioned?

Drastic, now we can’t even spend half of Özil’s yearly salary for a player purchase. Hope we can still pay his salary though, otherwise he goes on strike or something. (Or is he already?)
Anyway, I think we just don’t want to pay that much for this player. Half a year ago he was worth one million apparently.

If we don’t have any money why didn’t we take
the Mkhitaryan money, it would have covered thissigning and saved on the wage bill. Nothing
makes sense. If this deal doesn’t go through after
publicly bringing him through the airports and him
saying he’s happy to join us then somebody
needs to be fired for incompetence. It’s
embarrassing.

Should be back on a flight anytime now…