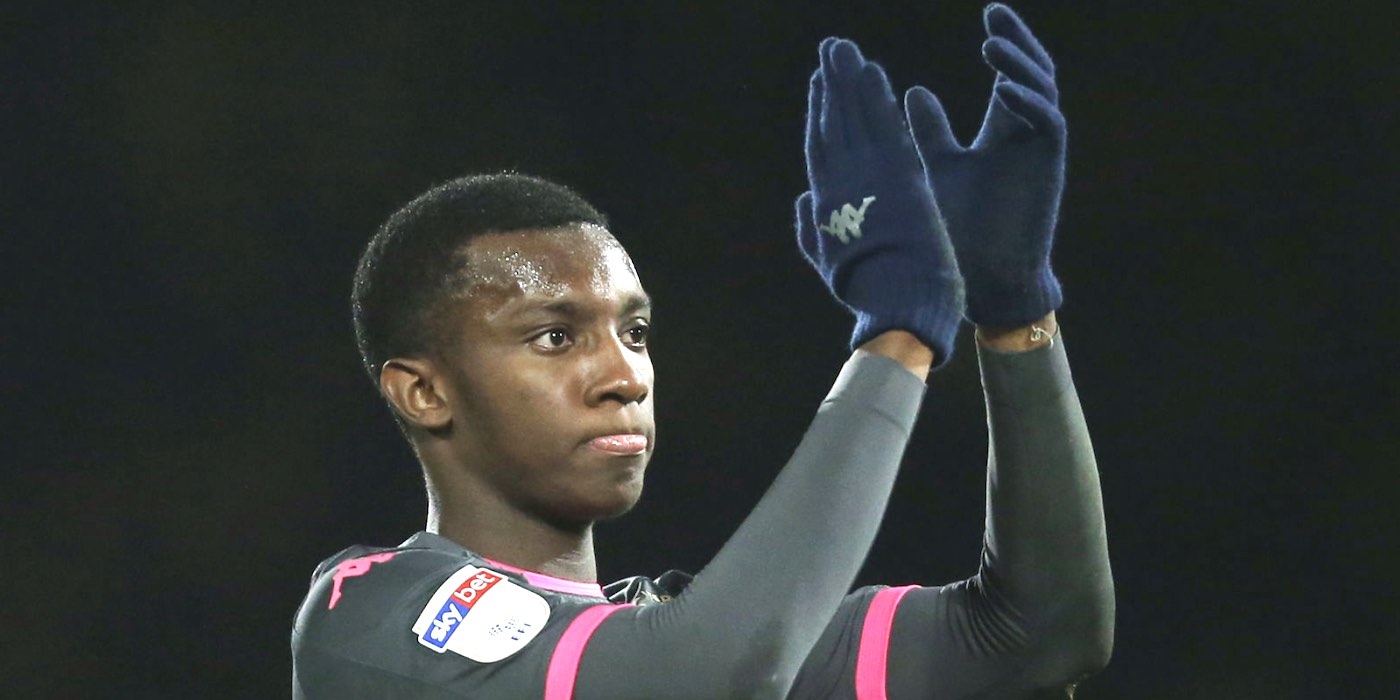 Mikel Arteta says he’ll have a chat with Eddie Nketiah and the club’s loan department before making a decision on what’s next for the young striker.

The 20 year old was recalled from his loan spell with Leeds United earlier this week. It began pretty positively, but he wasn’t able to force his way into Marcelo Bielsa’s starting line-up with any frequency, and scored his last goal on October 22nd.

With plenty of football still left for Arsenal this season, it’s not beyond the realms of possibility that he stays with us, but there are clubs interested in taking him for the rest of the campaign – potentially even some Premier League suitors.

However, Arteta wants to find out what Nketiah is thinking before any final decision is made.

“We have to sit down with the loan department and we’ll do that this afternoon, to discuss the best possible way for him to keep developing,” said the manager yesterday.

“I think the environment that he’s been living in has improved him as a player, 100 per cent.

“He played some minutes, not as much as we wanted, but he’s a kid with incredible potential and we have to make a decision for the club, not for the next four months but for his career.

“What’s the best thing to do? We have to sit down with him, hear from him – that’s very important because we need to know what he needs as well – and make the right decision for the next five months.

“I think the first idea was that he was going to be on loan for the rest of the season, but we have to assess the situation again now.”

Perhaps with the demanding physical style Arteta is implementing at the club, an extra body in the squad might be useful, but we’ll wait and see what they decide.

The fact that these exciting attacking youngsters are queuing to get a game at Arsenal makes me hope and assume that these Lemar rumours are dog shit. Unless we know we are losing Auba or Laca we should give that a massively wide berth.

Lemar i read is a versatile player? Who can play anywhere behind the striker, and also as a No8, and with Tierney injured until March, Arteta may even see him as an option at left back? Which might give us room to loan out one of Willock or Smith-Rowe, let them pick up 20-60 games over 6-18 months, before Ozil moves on, it would be smart squad planning, rather than throwing too many youngsters in at much. (even though I’d ditch Ozil tomorrow, if we had the chance) I think it’s inevitable that for economic reasons we sell either 1… Read more »

PS: you guys should sell your shares to a person who is passionate about football.

Blogs, thanks for the free service but these repeated server issues are not acceptable

Wrong on all 4 points

Kevin, only the first three ?

Thanks for the FREE service Blogs. Keep up the great work!

Why settle for less though ?

The server issues are not ideal, and Blogs has said it’s being looked into. To say it’s “unacceptable” though is a bit much considering by your own admission, you pay absolutely nothing for his hard work and dedication…A less harshly worded complaint on your part would be more gracious…
If you do want to be more demanding sign up for Patreon (as I do) and then vent all you like( which I don’t) as a paying customer ..

Okester, I will subscribe to patreon soon enough. I listened to the podcast earlier today and I got the feeling blogs was lax about it. And as I say it’s ‘repeated’. I pay nothing for it but dear Blogs will be better for using top notch services and business practices for “HIS BUSINESS” . And I can’t lay into Blogs fully because I don’t know if he’s tried installing servers with 3X the capacity and it failed. My comment wasn’t harshly worded ? Anyways I disagree with Blogs on more than one matter, eg I’m perfectly happy with super Agents… Read more »

blogs can just take it as a compliment, when you have people so frustrated to the point they forget their reality it shows they are hungry for the arse.

Could you Eddie start against Leeds or is he Cup tied? Would be good to give Auba a rest

Was thinking that myself, then Loan him to West Brom to win the championship

I think he is cup tied. Even if he wasn’t, he cant play for us because if he plays a single game for us, he cant be loaned out. A player cannot play for more than two teams in a single season.

Came here to say that, I know it’s a small rule but I’m surprised how many people don’t know of it.

But he’s the best think to ever happen to us haha remember this message in ten years when we’ve been the dominant club in England for the last 8!!

If he goes out on loan please go with Nottingham Forest or Bristol City – I like both teams and they are in with a shout of getting into the playoffs so would be a great experience for Eddie in an ambitious, competitive and demanding environment all of which will be good preparation for playing at Arsenal

AFAIK Bristol were in for him in the Summer

Perhaps not a popular opinion but I’d consider moving Lacazette on to generate funds for a CB/CM/RB/LW, and giving Nketiah a real shot at replacing him directly. It seems wasteful to have 2 high value and salary senior CFs, when we have another two with huge potential all competing for the same 1.5 slots (Auba and Laca really shouldn’t be playing left wing). Laca though I like his work rate and passion seems a little overrated by our fanbase, and I’m worried that he may be on the verge of slowing down. I don’t think he could handle much physical… Read more »

I agree about Lacazette in principal, I would rather keep Aubamayang. Problem is that Aubamayang has 18 months on his contract, if he does not sign a new contract we must sell this summer. Lacazette has a longer contract, yet seems just as unsettled as Aubamayang

There is the hope that with a functioning team, a manager he respects and assurances of games at centre forward Auba might decide that renewing his contract is his best option. But none of that is certain at the moment, yeah. Either way his future needs to be decided by the early summer so we can plan. I don’t think losing Auba necessarily means that renewing Laca’s contract is a wise thing to do, but we’d then have to consider the comparative quality, cost and likely longevity of a replacement. I wouldn’t be comfortable with just Gabriel and Nketiah as… Read more »

Its not a position we need reinforcing BUT with prospect of potentially losing one of the key strikers come summer, may be good to have redundancy in terms of up coming strikers from in house. Martinelli recently added looks sharp and useful, should be played as much as possible. BUT Nketiah could have some feature as well. OTOH, too much chop and change also an issue. Not entirely convinced by Pepe’s mercurial performances and Nelson has struggled to make impression yet but as we go into season half of season, bar injuries, feature for younger hopefuls will dwindle. Nketiah looks… Read more »

As far as I’m concerned we should be giving everybody a clean start from this point on as its starting to look like most, if not all, of our problems stemmed either directly or indirectly from Emery and his training methods. I won’t write anybody off in the squad until we’ve seen what they can do after a few weeks of Arteta’s clearly superior man-management and training regime approach. I mean, Arteta comes in and suddenly they’re all looking happier, they’re starting to get fitter, and they’re playing like a team again. Nobody’s effing about with Ozil. Nobody’s forcing Xhaka… Read more »

Play him against Leeds in the cup. Hope he knocks them out.

Auba is a top quality striker but I would prefer him to focus on attacking. I think a player who cam see infront the way players are positioned e.g. a defender or defensive midfielder should be captain. Luiz performance against man utd is what I was to see