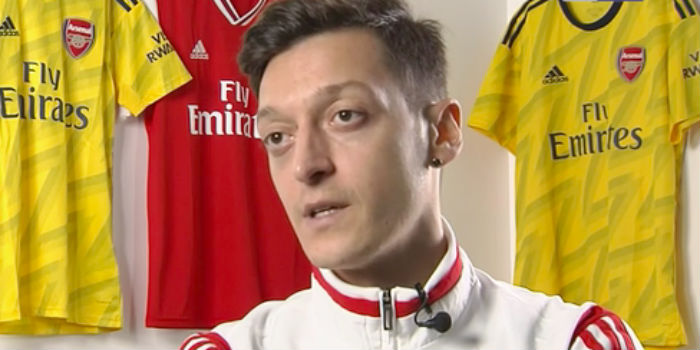 Mesut Ozil admits he’s surprised by how quickly Mikel Arteta has made an impact at Arsenal and revealed he’s feeling much more positive since the Gunners changed coach.

In a wide-ranging interview, the German also said it’s up to the players to rescue the season even though a top four finish looks very unlikely.

Sitting down with beIN SPORTS who posed questions in English, he answered in German and the video was published on a Turkish-region version of their site.

Luckily we had Lewis Ambrose on hand to translate for us…

On how his season is going…

Obviously, there are some difficult times that I’ve had, especially with the former coach, I wasn’t playing so much. But now that’s all in the past and

I’m concentrating on the future, on doing everything to help the team. I’m just thrilled to be back on the pitch, so I can do what brings me joy.

On Wenger and Arteta…

I don’t think I need to say much about Arsène Wenger. When you see a career like his, how successful he’s been, how many years he was here and everything he did, how many titles he won.

As for Arteta, as I always said in another interview, to bring so much positive impact in such a short time has left all of us surprised. Especially because of how little experience he has as a coach. You can tell that he’s hungry, that he’s learnt a lot, and that he wants to help the team and the club to play successful football again. We’re on the path there. All the players are happy, are smiling, and that’s what we need.

On the problems since Wenger left…

I think for the club it’s always hard when you’ve had a coach so long-term, who understands the club and has built the club. I’d say it’s always harder (then) for a new coach to arrive and be successful.

It was like that for the last coach – it’s a real challenge to come to a big club and be successful. It doesn’t happen automatically. Now with Mikel we have something very different, everything is positive.

It’s very important that we’re all in good spirits, with that you can deliver what the coach wants from you on the pitch and we’ve been missing that in recent months.

You can feel the positive energy, he understands the players because he was a player himself not long ago. And it’s a good thing for the club.

On finishing in the top four…

The problem is it isn’t in our hands now. We’ve dropped so many points already but I do hope with Mikel, who understands us and knows what he wants from us on the pitch, that we can get into the top four. We’ll give everything to finish there so the club can play in the Champions League again.

On adapting his position…

I’m a playmaker. In the last few years I always played centrally, now it’s a bit more to the right. But you can see I have my freedom on the pitch again. There are many clubs who play without a playmaker – with two ‘eights’ and a ‘six’, we play like that sometimes. Ultimately it’s up to the coach to play their system. My aim is to play, no matter what position, and to perform and help the team.

While he’s here we might as well keep him happy to get the best out of him. Arteta has worked out that Ozil needs an arm around him and to be told how great he is. It’s not a criticism of Ozil by the way, just an observation. Oh and OT, but Danny Murphy has just said on TV that if Liverpool go unbeaten it will be a bigger achievement than when Arsenal did it. What a complete helmet. How much did Klopp spend on his squad compared to Wenger??..even taking inflation into account? And the gap between top and… Read more »

I too am a complete and utter embarrassment…

But Danny Murphy is still a helmet anyway.

Goonerink
Reply to  Right Across Sunderland!

I’m sorry I love the invincibles as much as any fan but they have drawn 1 game compared to how many we did?
You can cry about spending all you like but you can’t argue that this mugsmasher team and klopp are something else.

TeeCee
Reply to  Right Across Sunderland!

Funny, when we did it I don’t recall all the other potential title contenders having an utterly shit season and playing like spavined hippos.

Richie
Reply to  Right Across Sunderland!

Just looking at Liverpool’s fixtures; They are currently on 38 unbeaten. Their 49th game (if they remain unbeaten until then) will be away to Manchester City. They do have Wolves away and Everton away before that, but that 49th game is looking like the one we can be most hopeful of them not matching our record. Their 50th game will be Villa at home. They don’t come to the Emirates until third from last game of the season so we don’t have a chance to stop them ourselves. If Man City can beat them on that 49th game, we can… Read more »

I don’t worry too much about Liverpool. I just remember that every game they win makes United fans feel more and more redundant and that makes me happy.

I mean, imagine sp*rs doing what Liverpool are doing. I’d be weeping into my glass of escape juice on a basis daily.

I’m extremely worried about our season unbeaten and/or 49 game unbeaten records being broken by Liverpool. That’s a majority of what makes a club’s history – trophies and records.

Meh. Arsenal give me enough to worry about. If I start stressing about what all the other teams are doing too, I probably wouldn’t enjoy football much.

Fair enough but this directly affects Arsenal’s history. I would have liked this special record to stand for decades, even optimistically a century like the Preston North End record did, and for people to still be talking about it in future generations. I would have liked to tell my grandkids one day about the once-in-a-lifetime Arsenal Invincibles without them turning around and saying “yeah but Liverpool did the same sixteen years later”.

I have a feeling that Wolves are going to give them a hiding on Thursday. Can feel it in my water.

And most of all if their still unbeaten by the time we play them, then what more motivation do we need to go out and beat them to stop them breaking our record, but hopefully they get beat by then cos i don’t fancy us being able to stop them when it matters

It’s a long way off yet, with many ifs and buts, but we play them on 2nd May – which is the weekend sandwiched between Champions League and Europa League semi-final mid-week dates – so if they have already won the league by then, they could be resting a lot of players.

“How much did Klopp spend on his squad compared to Wenger”

This is the worst argument you could probably use. I think we were the most spending team in the league in the years between 1997 to 2002. Money was worth much more back then.

But yeah Danny Murphy is a cu*t.

NachoMan
Reply to  Right Across Sunderland!

The thing about this Liverpool team is that they could break arsenal’s unbeaten record, city’s points record, and even potentially match Utd’s treble-winning trophy achievement.

Say what you want, but I still think that’s pretty impressive.

We’re stuck with him, he reiterated yesterday, he’s happy with his contract, and he plans to see it out…. We’ve got a forward that doesn’t score, doesn’t assist, has run around a bit more for 5 games, but has completed 90minutes just once. Ozil is more than capable of producing moments of world class quality, however these moments are seen less than the Loch Ness monster. Drop him? And he’ll stink the place out Play him? And he’ll stink the place out I just don’t understand the hype? the odd moments or performances of top quality, aren’t worth the trade… Read more »

Sometimes I ask myself why would any Arsenal player be loyal if nowadays they don’t get the respect they deserve back. He is here for 7 years and any human being would get attached to some place after that time. Of course Ozil cares for Arsenal too. Saying he is toxic even though you don’t know anything about him. This is just pure hate because you personally don’t like him. Ozil gets 350k because he is the biggest global star in the Premier League. Football is only about business today. I rather see that he gets that kind of money… Read more »

I’m a Thatcherite and free market capitalist, I fully understand the concepts of supply and demand, and don’t begrudge anyone who gets ahead in life. This isn’t personal, I just don’t see what he offers us? His performances are generally rubbish, his attitude has been called into question by 3 separate managers going back over 3 years, as well as Mertesacker who questioned his work ethic,he ran out of end product 3 years ago, and hasn’t produced a decent run of form since the first half of the 2015/16 season, where he was phenomenal from Aug-Dec, then disappeared again….. Ozil’s… Read more »

Thatcher took over a country that was bankrupt, after years of harmful centrist/socialist Labour policies, that had left them with no choice but to go the IMF for the biggest loan ever distributed in 1976, where people couldn’t afford to bury their relatives, the unions had the entire country on strike, which meant further standstill, and the streets where littered with rubbish, which still happens in a few Labour constituencies now. Thatcher became PM in 1979, and by the time she was ousted by the Europhiles in her own party in 1990, we were the 4th richest country in the… Read more »

oh rich, you’re risking a political discussion about how wrong you are. getting ahead in life has sadly little to do with quality of character. on topic though, ozil is up and down and down more than we’d like, along with everyone else at the club. but hey, arteta seems to have given the place a lift. ozil too. and ozil on his day is better than all the xhakas, gendouzis or ceballos. i love arsenal as art. i love wilshere’s goal of the season. i love the outside of henry’s boot. stop giving me the fucking conservative party. almost… Read more »

Whenever he decides to leave he should go to the MLS and absolutely destroy everybody for 2 seasons.

A fair few digs at Emery there, but I can’t blame him!