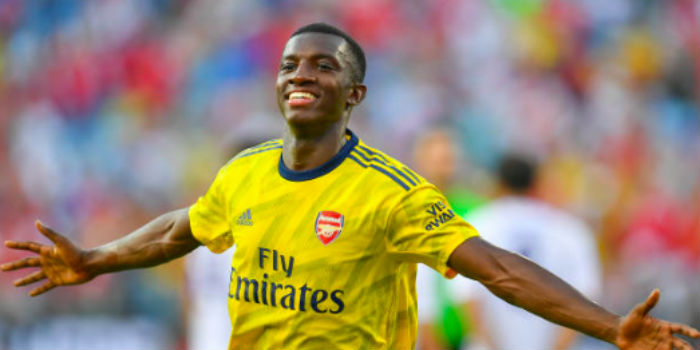 Bristol City, Sheffield Wednesday and Nottingham Forest are amongst the frontrunners to sign Eddie Nketiah on loan for the rest of the season, according to The Athletic (£).

The England under-21 international, recalled from a season-long spell at Leeds United at the weekend because he wasn’t getting enough game time, was the subject of a series of ‘Dragon’s Den’ style pitches from clubs across Europe in the summer.

He seemed to be on the verge of a move to Ashton Gate before Unai Emery, Per Mertesacker and loan manager Ben Knapper signed off on the move to Elland Road. The Robins appear to be favourites this time around.

Mikel Arteta said last week that he’d sit down with the 20-year-old to discuss his options.

There must have been some temptation to retain Nketiah given his goal-scoring prowess and the fact we have games in three competitions on the horizon, however, it makes sense in the long-term to maximise his exposure to regular first team football. He wasn’t part of either squad as Arsenal beat Leeds 1-0 at the Emirates last night.

Bristol City are currently 11th in the Championship, three points shy of the playoff places. Nottingham Forest and Sheffield Wednesday are fourth and eighth respectively.

David Ornstein says a decision on Nketiah’s next club is expected in the next 48 hours.

It’s a tricky one. Given Laca’s recent form I would be tempted to keep him around. Unless we find a team that plays him week in week out

He’s 20. He’s behind Martinelli in the pecking order of ‘youth strikers’ at our club, and doesn’t have the pace to play on the wing. A loan makes sense to develop him for next season, regardless of how Lacazette is playing at present.

Bristol City need a #1 striker, he’d play most, if not all games there!

That team we played against last night looked like they could do with a classy finisher like Nketiah…!

No, a striker’s main purpose is not to score goals but to hold up play ala Bamford ??‍♂️

The guy with 10 league goals this season? Really not a bad return for someone who links up the play so well. Leeds completely dominated us for 45 minutes and Bamford was heavily involved in the pressing and possession. Let’s not pretend that Nketiah should just walk into that team because he finished a few chances early in the season. He’s clearly a talented player and would score a lot of goals in the Championship if given the opportunity, but we made a mistake loaning him to a team with such a strong squad. It’s ok though, I’m sure he… Read more »

The best strikers do both

That’s only for teams with lords of the wings like mane salah ronnie etc or va va voom box bombers. Leeds have none of those.

Forest, Bristol then Wednesday in that order of preference for me – love to see all three in the EPL

Would be good for his development. With potentially losing Auba in the summer (or even Laca), we could well do with other potential solutions from within. A number of other players for me can benefit from further strong loans. Mavropanos for one. He has yet to convince and has been on periphery. He needs exposure (and not at our expense at the moment) Smith-Rowe also slightly peripheral this season could do with regular playing time particularly as most of the more preliminary competitions start to wean off and we still have Ceballos to come back into attacking midfield not to… Read more »

We can’t play Abu and Laca every game, and what if one gets injured? We should keep him on the bench.

Having seen a lot of City over the last few years I would recommend them. They play good football and have previously done well with loan players (see Tammy Abraham from 2 years back). Plus Bristol is an awesome city.

This is true. Bristol is awesome!

Just stick it in the contract that he must play at least 45 mins in every game that he’s fit or something like that, or they get fined like 500k or 1 mil per game.

He should have gone to Bristol in the first place, they really wanted him, he would have played a lot of games by now. Leeds execs may have won the presentation but I don’t think their manager ever really wanted Eddie.