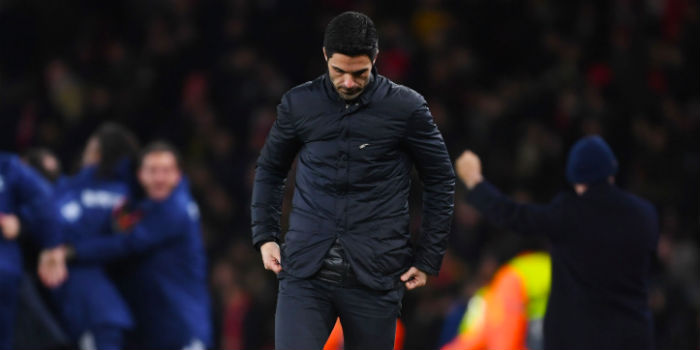 Pierre-Emerick Aubameyang admits he should have rescued Arsenal with the last kick of the game as the Gunners crashed out of the Europa League on away goals to Olympiakos.

The Gunners went into the game with a 1-0 advantage but were sloppy and sluggish from the off against a well organised defensive unit.

Even after Pape Abou Cisse levelled the tie on 53 minutes, Mikel Arteta’s players struggled to find the urgency to up the tempo and the game drifted towards extra-time.

Aubameyang’s acrobatic effort with seven minutes remaining looked like it might be enough only for Youssef El Arabi to send the Greeks into ecstasy with a late tap-in.

As the Emirates Stadium rapidly emptied, a final gilt-edged chance fell to the Gabon international but he fired wide much to the dismay of those who stayed in their seats.

“I don’t even know,” a frustrated Aubameyang told BT Sport when asked how he missed.

“I feel very, very bad but that can happen. I don’t know how I missed this chance. I was tired and I had some cramps but it’s not an excuse. I have to score this goal.”

Mikel Arteta was similarly disappointed by the way the game played out, especially the manner in which his players conceded at the death.

In the build-up, Bernd Leno conceded a cheap corner and even after the initial set piece was cleared, a second ball from the right caused havoc at the back post.

“It hurts a lot,” he told BT Sport. “We had a lot of intentions in this competition. It was very important for us. Emotionally it has been a very difficult game.

“We tried and tried and tried, we threw everything at them. They defended very deep. We managed to score though and we were through but then we conceded a late corner and it was another set piece.

“To attack against 10 players is a very difficult thing. I felt we created enough chances to win the game comfortably. It didn’t happen but we had to manage the game much better in the final five minutes.”

Arteta: Our centre-backs must help the attack

At this point I think we shouldn’t force the european stage for next season unless we reach the Champions League via the PL (highly unlikely). Europa League has been a disappointment for us for three consecutive years ,doesn’t really provide significant funds, won’t convince any of our players to stay and won’t attract potential signings either. It would be reasonable for the team to continue developing under Arteta’s guidance while focusing only on the domestic league. Quite a tough pill to swallow but we should consider taking one step back in order to take two forward, we’ve seen examples where… Read more »

Literally thinking the same thing. It seems as if the players are behind the philosophy of Arteta, and he does have a big ask now to convince the big names to stay. But us dropping out of Europe altogether will hurt yes but I agree that it might be the best thing that could happen to us.

4th place next season maybe, but no chance with this defence.

But next year’s defense will include a fully fit Tierney, Bellerin, and Holding, as well as Saliba, so there is the potential for improvement.

Was hard to watch Auba in that interview. He wasabsolutely distraught.

And to be fair to him, he scored a great goal and that should have been that. He shouldn’t even have to score that if you get what I mean? The defence and particularly Leno should of done their jobs properly. Anyway if auba goes or auba stays he is still a great to me. Poor guy

Broken men right there with us. First time Artetas sheen of brilliance has come down since his first press conference.

Is Arteta kidding? We did the exact same thing the entire match, slow motion passing back and forth between Xhaka and Mustafi

They did try. And I don’t think most of them played badly. They passed the ball about effortlessly. Side to side. Not even slowly. They manoeuvred the ball into wide areas with ease. But there was no space through a back 5. The ball we’ve been playing every game. They refused to counter or be opened up so they didn’t get caught. So WHY, once we got the ball into wide crossing areas did we go back and switch yo the other side. There were never any gaps to slide the ball between them. Accept that fact as a team… Read more »

This defeat comes down to a lot more than a miss by a striker who scored 61 goals in 2 years for us and Leno conceding a corner.

The mask slipped and a lack of urgency from the beginning looked a little like the old Arsenal. Arteta was right to rue those missed chances in the first leg.

It is still a big turn around since last year though.

If Arteta doesn’t take 100% responsibility for that then he can fuck off. Changes that needed to be made an hour before he even made motions and not enough rotation for 4 straight games in 10 days.

I know nobody cares, but “fuck off” like you’d say to your mate when he’s going on about you missing a sitter for too long, not fuck off out the club.

Was tired and pissed off, but he’s definitely too Wenger about his subs and loyalty to players.

OK. This sucks. But we now have to give it all to get to 5th (miracle 4th) in thePL. Support. Don’t give up on the team. Or the season. Criticism is fine. But Supporters gotta man up, just like the team.

Why on earth would you want to qualify for the Champions league, when we can’t get passed a Greek side with this defence?

Money. Keep our best players. Play in the top competition… there are many more obvious answers.

Yes but do we need the ignominy of leaking 10 goals to Bayern or whoever?

Watching that game was like some awful kind of torture–with a kick to the gut followed up by a kick to the balls at the end for good measure.

I am struggling to find the positives, and that last miss from Auba made this more painful than it would have been otherwise. But the only silver lining is the old cliche – focus on the league. We have a small, outside chance of qualifying for the CL in 5th and this gives us a slightly better chance of winning games in the league. Europa this year is much stronger than last year, and the chance of us winning it was also pretty small. This result hurts, but not all the gains of the past couple of months have been… Read more »

Not a lot to say about a team that cannot see through the last five minutes. Same players available to Arteta as Unai Emery. So no excuses. I mentioned January we should be focusing on midfield instead of bringing in yet another half penny Cback and an injured fullback ala Debuchy. We seriously needed upgrade to capability in midfield. Neither of Granit- Ceballos-Ozil or with Torreira and Willock worked today. Torreira in fact was pretty poor losing the ball a number of times. Willock looked a bit lost. Would have liked to have seen the aggressive Guendouzi come on. Martinelli… Read more »

Look, that’s why Aubameyang, while very, very good, is not and never will be in that elite level. It’s not a criticism, it’s just the truth.

Hope Lacazette never starts another match for Arsenal again. Kills so many attacks and can’t even outspeed Ozil for fuck sake