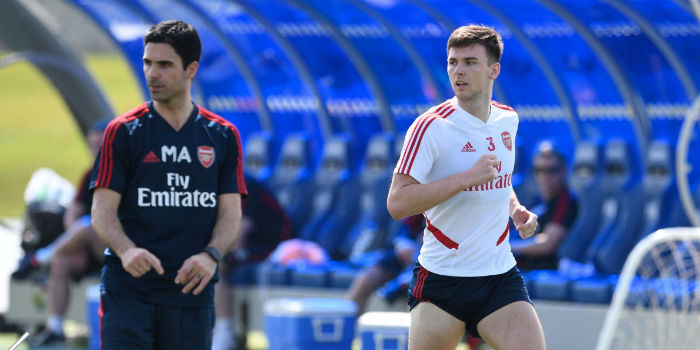 Mikel Arteta gave an update on the fitness of new boys Pablo Mari and Cedric Soares as the duo work hard to be considered for first team selection.

This morning’s medical bulletin suggested that Pablo could be fit for Thursday’s trip to Athens to face Olympiacos while Cedric is still in rehab having been signed with a knee injury.

Speaking ahead of Sunday’s game with Newcastle, Arteta said: “Pablo hasn’t competed since the end of December, I think. He had a little issue. He’s been training with us in and out a little bit but he’s been looking good. I think this game will come a little early for him but I expect him to start joining the squad in the next week or so.”

On Cedric, he added: “He’s very disappointed, obviously when you join a new club you want to make an impression straight away. He had an issue in his knee, it’s not completely healed yet, he hasn’t been training with us. I expect him to be back in the coming weeks but I can’t give you a date.”

The boss was also quizzed on Kieran Tierney, who has been sidelined since December with a dislocated shoulder.

“He’s doing very good progress but we need to wait for the bone and its attachment with the tendon to heal before he can make any contact. He’s been training and his work ethic is incredible. I’ve been really impressed with him. Hopefully, we can get him back soon but we need to be patient with him as well.”

I just don’t get the Cedric signing. He will be playing his way back to fitness during March, if he gets 1st team time. Then our season will finish not long after, by which time the loan is up.

We will sign him in the summer. Class signing, PL experience etc. If he integrates before then even better. Been crying out loud for this competition for places for ages…!

Good going forward. Cant defend. Injured when we sign him. Made for Arsenal 😁

Massive news coming out about Man City: they have been banned for the next two seasons from the Champions League. Does this mean 5th this season qualifies for the CL? If so we’ve got a chance!!

That’s what it means, yeah. But you’d have to wait for the CAS verdict, City already announced that they will take action against this decision.

We got a chance for top 10. At least we strengthened our squad with some injured players.

Hopefully Cedric is not the new Debuchy.

Mari may get opportunity. BUT there are 8 Cbacks as is. Two out on loan, one injured, so remainder in Sokratis, Luiz, Mustafi and Holding to tussle with Mari.

Its numbers more than quality but yo never know. Dubai break may have also added more time into the work of existing Cbacks who will be hungry to keep their places.

At least Arteta has options to say the least.

We will need two quality players in every position. Too many fans simplistic beleive it to be a zero sum game of either or. BUT we will need BOTH Kolasinac and Tierney. Saka likely needed higher up on the Lwing. Both Tierney and Kolasinac have good attacking ability, both have struggled defensively as well. Room for improvement for both. On the right fullback side of things, I’m still not sure why we need cedric other than Bellerin is not 100%. BUT fully fit, it should be Bellerin and AMN IMO IS in his natural position. he has played there for… Read more »

It going to be a huge success if the whole team stays fit 4 the remainder of the season. #COYG