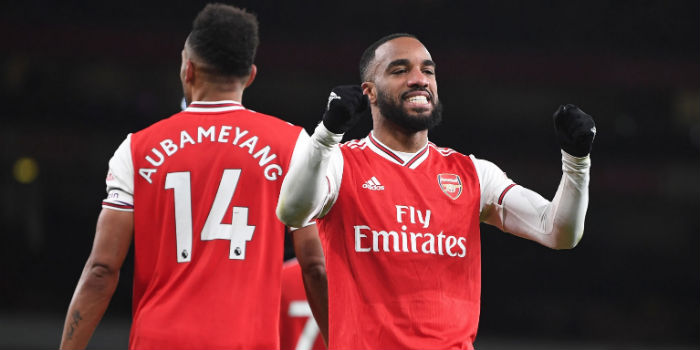 Alex Lacazette’s first goal since early December sparked joyous celebrations from his teammates who recognised the torrid time the Frenchman had been having in the final third recently.

The strike, scored deep into stoppage time to put a gloss on yesterday’s 4-0 win against Newcastle, was Welbeckian in its mishittedness but that didn’t matter to the attacker, on as a late substitute, who celebrated with all the gusto of a man given a last-minute reprieve from death row.

After the game, Arteta, explained why he’d preferred to start Eddie Nketiah over Lacazette but was quick to recognise the importance of the goal for last season’s player of the year.

“The message is very clear, whoever trains like they do and I see that they have the abilities, the quality and their hunger like he’s done to perform today, he’s got a chance to play,” said the boss.

“Today I decided to play Eddie because he has been training in a phenomenal way, I decided for him not to go on loan and to stay and as well I have to support that decision.

“Laca has been playing all the games with me, he hasn’t scored and I told him the decision why and he accepted really well. I said ‘come out and you will score a goal’, he did.

“I’m so pleased not just for the goal, but for the reaction of all his teammates and the staff. They showed how much they love him and the reason why is because this guy works his balls off every day.”

Arsenal have plenty of football coming up in the rest of this month so having Nketiah as an extra option alongside Lacazette and Aubameyang could prove to be a masterstroke. Nketiah’s goal against Bournemouth before the winter break took his tally for the season to six (five scored for Leeds on loan) and he was unlucky yesterday as he hit the bar.

Give him a start on Thursday. It actually seems Arteta can play a completely different 11 against Olympiakos on Thursday if he wanted to save yesterday’s 11 for the Everton game.
Martinez, AMN, Sokratis, Holding, Kolasinac, Torreira, Guendouzi, Nelson, Willock, Martinelli, Lacazette. Should be enough to do a job in Athens.

Europa League is a priority. Play the best team possible

This is a team that should destroy Olympiakos, very good team.

No. Guendouzi and Torreira don’t gel

Football is an Arteta
Reply to  Richie

“Today I decided to play Eddie because he has been training in a phenomenal way, I decided for him not to go on loan and to stay and as well I have to support that decision.” … I know everyone is in love because few top players made a difference today.. but holy shit ignoring Martinelli for CF with 3/10 Eddie is abyssmal decision. Our n.2 goal scorer at the club. World class talent gets pushed for average Nketiah. Nketiah was beyong terrible, wouldn’t surprise me if Martinelli scored 2 goals yesterday. Player of the january btw, dropped for someone… Read more »

Thankfully, you are not managing the club. Arteta has a vision that is far larger than yours.

You know nothing Jon !!

Ignoring? Have you seen how Klopp or Pep manage their teams? It’s the exact same thing Arteta is doing now. Unless Martinelli gets injured I’m pretty damn sure he’s starting on Thursday either on the left or centre. Oh, and thank goodness you’re not the manager.

The Arsenal
Reply to  Cmdn

Whamio
Reply to  The Arsenal

Both will likely play on thursday.

SharpasFc
Reply to  The Arsenal

It has nothing to do with punishing Martinelli but more about keeping his feet on the ground.

Pure ignorance! You have absolutely no idea of the bigger picture. Perhaps Mikel felt that Gabi-goal needed a rest after playing the last few in succession. Personally, I prefer to respect the decision of a professional football person such as Arteta than the thoughts of a clueless keyboard warrior.

I’m excited to see what Arteta can do next year if we keep a lot of this tteam together. A fit and raring Ceballos fizzing the ball around will make such a difference. If we can’t keep him specifically we definitely need that type of player who has the ability to beat a press with skill. If we can also add a centre midfielder who physically can eat the ground up and provide us with some stature/presence I think we’ll be in good shape. Realisitcally we aren’t going to be able to bring in 3 or 4 big names like… Read more »

It sounds like most of these guys are responding properly to being left out. The only way is to work as hard as you can and never sulk. Then it’s for the manager to reward thar if the guy in possession of the starting place drops his level. It’s the easiest way to maintain standards. Pick players on merit. If they’re made of anything, they’ll respond. Just be fair to them!

He should have said cojones.

Laca is my favourite player since the time he came here. The goal yesterday and then the team celebration almost had me breaking my laptop again since we beat Sp*rs 4-2 last season.. the hype was real!! The players and us fans all know he’s got lethal boots so I hope this is where he kicks on from!

Laca-a-new signing you would say.

Playing at CF is so much more than just scoring. Which is why Laca is preferred in role where Auba can be a little light weight and unsurprising, Nketiah still has a learning curve. Like Giroud before, Lacazette functions as a node to bring in our second line strikers/AM..he is physical and bullies Cbacks to gain space for us. IT is also a difficult area to work in which may explain the reason why he scores a little less at the moment with the team still struggling for fluency in the attack. In any case shunting Auba left side has… Read more »