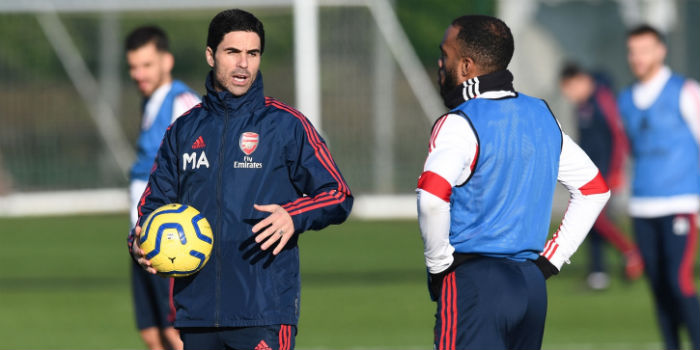 Alex Lacazette says the way his teammates celebrated his goal against Newcastle shows the good team spirit in the Arsenal dressing room.

The Frenchman was experiencing the longest goal drought of his career before his mishit stoppage-time effort sealed a 4-0 win on Sunday.

Clearly thrilled to hit the back of the net, he raced to the corner flag, slid on his knees and was promptly mobbed by those in red and white.

To cap things off, his traditional handshake and bow celebration with Pierre-Emerick Aubameyang also made a welcome return.

“I am really, really happy because I waited for this moment for a long time,” he told the Evening Standard after the match.

“As well, I am touched because of the way all my team-mates reacted when I scored that goal. It means a lot to me and a lot for the spirit we have in the team. This is good.”

Having not scored since the early December game with Brighton at the Emirates, he admitted things had been tough.

“It was really hard and complicated, because sometimes I had some games with no chances, sometimes I missed or the goalkeeper saved it.

“Of course for a striker it is always hard to not score, but it happens in football. Hopefully it is the last time for me.”

Lacazette will now be hoping for a return to the starting lineup. After a week away in Dubai where Mikel Arteta tried to boost his confidence, a few eyebrows were raised when Eddie Nketiah was selected to start ahead of the Frenchman yesterday.

“He talked with me to give me confidence,” said Lacazette of the winter break meeting.

“As well I worked more with the second coach, so there is some stuff we do to be better on this occasion.”

Mesut Ozil and Nicolas Pepe were both on the scoresheet with the latter also grabbing two assists.

Lacazette says he’s had sympathy for Pepe’s travails this year after he arrived for a club-record fee from Lille in the summer.

“I used to say we need to be patient with him,” he said.

“He is still young, he came from another league and it is always different. The Premier League is the hardest league in the world I think, so you have to be nice with new players like him.

“He is someone who needs confidence and when you give him confidence he is better. He just needs time to understand how the league is and now we can see a really good Nicolas Pepe.”

He added: “It is always hard because everybody is different. Everybody reacts differently in situations.

“I talk a little bit with him but he can just learn himself with time.”

Lacazette also took a moment to talk about Arteta’s coaching style. The Spaniard has spoken strongly about there being non-negotiables that all the players must deliver and it appears a disciplined approach is starting to pay dividends.

“He is, how can I say, he demands a lot of things. I wouldn’t say he is strict, but he knows what he wants and when it is not good we know that as well we are playing shit. He is a good coach.”

For his part, Arteta has been impressed by Lacazette’s application.

Best part about the whole game. SO happy for him.

Despite some imbalance and deficiencies, I think we have a pretty good squad, I know it’s not logical when the team is 10th in the league.

However, our managerial issues are well documented and our performance/results are on a positive trajectory.

Despite all the struggles we have lost the same number of games in the league as Wolves, Leicester, even Man City!

There are not enough games to make the CL spots this season without a good slice of luck but I now trust Arteta and the squad to put up a good fight.

Twelve games to pull back 6 points on Spurs. Plenty of games, including one against them. Liverpool and Man City apart, most are winnable with the current squad.

Did he really say ‘playing shit’ in his interview?!

He said he worked more with the “second coach”. They were definitely stoked for him with the way they embraced him at full time.

Also, the celebration from the whole team shows that he is a big personality in the dressing room.

“Shit”? “Balls”? I must say, I’m quite liking this new, open and candid Arsenal. Very candid.

so happy for lacazette, he is a terrific player with superb work ethic. he is doing much more on the pitch than any other striker at afc. hope to see more of his goals and assits (his assist was quite impressive as well btw, very industrious, gritty work with two defenders on him)

Attitude is extremely important since it is not something you can teach. Talent without the right attitude will get you only so far. Lacazette has both, and then some.

At long last my name makes some sense. Confident and motivated big boys Laca, Pepe, Özil and Auba is all we need for that top 4/europa league glory to get us back to the UCL next season.

Fingers crossed those goals can spur them on and hopefully we can go on a run. COYG!

Its good to see all four of our front players on the score sheet 1) Laca – for obvious reason, he’s had a dry spell but needed the confidence back again. He’s been decent since return form injury but half a second off on the trigger. BUT his role is so much more than scoring for us as he acts (like Giroud) before as a node/physical presence bullying for space and bringing others into play. As some may have been given a wake up call with Nketiah, this isn’t so easily achieved…particularly against teams who elect to sit deep and… Read more »

Will Bobson
Reply to  Santori

“Concrete results” are the last thing we need if we’re only “treading water”!

An assist and a goal in ten minutes on the pitch is quite alright.