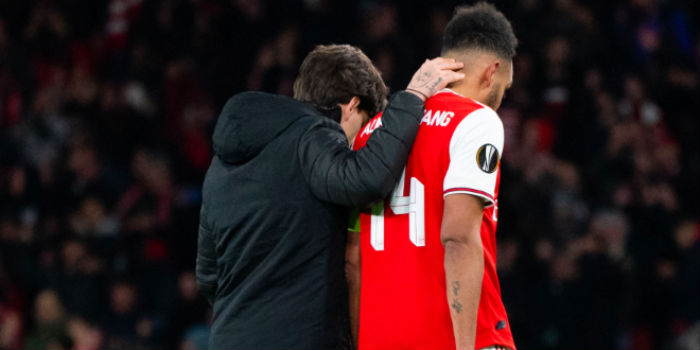 Mikel Arteta has revealed that Pierre-Emerick Aubameyag feels responsible for Thursday’s night’s Europa League exit after he squandered a gilt-edged chance to grab a draw that would have put us through.

The boss says it’s now on the coaching staff and players to boost the morale of a player who has so regularly rescued them this year.

“He was gutted,” Arteta told his pre-Portsmouth press conference on Saturday.

“Obviously he scored a wonder goal that was putting us through in the competition, and with the last kick of the game, he had the best chance of the game.

“He felt very responsible about it, we will try to be right behind him.

“He has been phenomenal all season for us and now the players have to support him, I think his reaction after the game – to face the media and the way he talked, it was a very mature reaction from him.”

It remains to be seen whether Aubameyang is given a breather for Monday’s trip to Fratton Park. After 120 minutes of football, it seems likely that the boss will rotate his squad.

The likes of Pablo Mari, Rob Holding, Ainsley Maitland-Niles and Reiss Nelson all got game time on Friday for the under-23s and will be hoping to have staked a claim.

Arteta was part of two Arsenal FA Cup-winning squads as a player and is excited by the chance to challenge for the trophy as a coach.

“It’s really special,” he said. “It’s probably one of the nicest games and days of the season when you play the final day in England, at Wembley, nice weather and an incredible atmosphere.

“And you know, it’s a trophy that’s been very much linked with our history. So we want to continue to be attached to that, knowing that on Monday night in Portsmouth, it will be tough.”

Emotionally & on the field!!

This was an awful game for us. No doubt there were plenty of learning points for everyone but it’s done. We get on with the rest of the season as we keep improving and aim for better results 20/21.

That about sums up everything. In our journey back to the top, these things will happen.
There is nothing to be overly sad about.
We can see a better team gradually unfolding.

The only saving grace at this point might be it allows us to focus almost entirely on the PL and with Man City’s possible ban and everyone ahead of us dropping points left and right, a CL spot might be attainable even if completely flukey.

Here’s to a thorough thumping of Pompey on Monday!

I love you Watford, I love you Troy Deeney – Invincibles 4ever 😀

“I love you Troy Deeney”

hold on a minute there fella

Agree, heheh. As happy as I am about the Watford result, but that is a bit too much. 😉
Still thumbs up for both comments.

What was I thinking 🙁 I got impulsive after the Deeney goal and posted straight away, please forgive me fellow Gooners 😀 😀

D’ya love Troy or his cajoles? Or the whole “package”?

THERE ARE ONLY ONE INVINCIBLES!!!!!

“On Leap Year day, Liverpool fall at the Watford hurdle!”

Let me say it in Hungarian: Csak egy veretlen csapat!

Btw, Troy Deeney, you can still fuck right off and suck some cojones!

there is only one invincible team – ARSENAL!!!

There is only one team that is capable of both

As awesome as the Watford result is (??) I would just like to speak on topic and say I hope Aubameyang doesn’t let this get to him. At times him and Leno have kept our hopes alive this season when everyone else was struggling. If it wasn’t for Aubameyang our season could’ve been a write off, so I hope he gets his head down and helps us qualify for the CL. Other teams are slipping and having no EL games may work out better for us. And then, if he still feels bad, he can just sign a new contract… Read more »

To quote Tracy Morgan on the great Leap Day episode of “30 Rock”: “Nothing is impossible on Leap Day.”

I didn’t realize how prophetic that statement was until today.

Hahahaha, with no Arsenal this weekend I put three pool players in my fantasy team and made salah he captain. It worked! 49 , 49 unbeaten…….

I know it’s entirely unrelated to this article but Arsene I am toasting you tonight, you will always be the invincible one.

And toasting the Hornets as well of course!

Lost £120 om Vicarage tonight om my bet and had still a good time. Our 49 still rules!

Come on. Get over it.

He needs to be sharper with these opportunities even if he has scored us a bunch.

We have been wasteful when it has counted too many times for way too long.

We are not unforgiving enough.

is only one one invisible orders are just trying there best

Great thanks to Watford

Its not his fault that other players blew it. Hes done more for us this year than anyone else. And i would rather see liverpool losing than us winning against Olympiacos so its all good.

I wonder whether the players feel as happy about the Invincibles & 49-ers being maintained – I hope so because it’s given the fans the high we needed.

Commiserations to Women’s team too for following on in the last minute giveaways.

Bit of a double-edged sword.
On the plus side, our record stands, history will continue to show one team as the all time undefeated greatedt and no amount of pundit bullshit about how much better Liverpool are is going to change that.
On the minus side, I think of how smug Watford’s captain, striker, Lystrosaurus lookalike and part time body double for Mr Creosote must be and this takes the gloss off things.