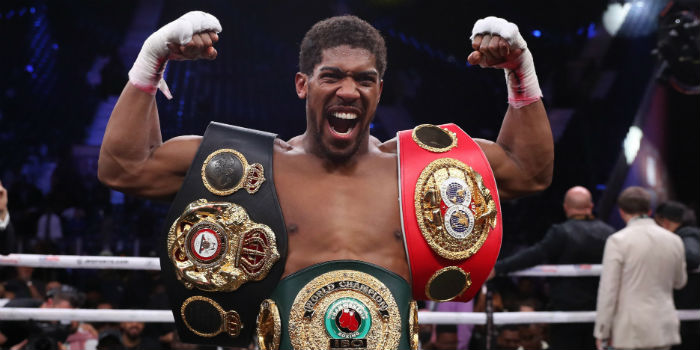 According to boxing promoter Barry Hearn, Arsenal and Sp*rs are going head-to-head for the right to host Anthony Joshua’s title defence against Kubrat Pulev.

Joshua, the WBA, WBO, IBO and IBF heavyweight champion, is hoping to fight the Bulgarian in June.

Joshua has said his preference is for the fight to take place in London but it won’t be at Wembley because it’ll be hosting matches at Euro 2020.

Back in December, Hearn said Sp*rs had shown an interest in hosting the fight “but unfortunately the dates didn’t work out.”

He claims White Hart Lane remains his preference but that Arsenal have since shown a bit of leg. The Gunners are already set to host the Killers at the Emirates in June so the pitch would already be covered.

“Tottenham is our preference, but we’re talking to Arsenal and they’ve come in and said ‘how do we make this happen?’

“I get the feeling that Arsenal and the Emirates would quite like to nick this. It would be like a little one-upmanship for them.”

Like all good promoters, Hearn is no stranger to the power of jealousy when it comes to sparking competitive negotiations. With that in mind, it’s little surprise he’s trying to spark Daniel Levy into action by suggesting we might nick the fight from under his nose.

“It’s not been done before at Arsenal, but I don’t see why not,” Hearn added.

“The Emirates was such a revolutionary stadium, but almost feels old now. It’s quite interesting.

“If you want to establish yourself as a sports entertainment destination, it’s a pretty big coup to get this fight.”

In 1966, 46,000 turned up at Highbury to watch Arsenal fan Henry Cooper take on Muhammad Ali for the second time in three years. Ali, then known as Cassius Clay, had won the earlier fight at Wembley despite being knocked down.

The referee ended the second bout in the sixth round, due to the injuries Cooper had sustained to his eye.

Let Sp*rs have them. An underwhelming, over-hyped heavyweight clash fitting for that toilet-bowl of an ‘entertainment arena’

Heavyweight boxing is precisely the kind of soulless, over-hyped, catering-to-the-same-people-that-wear-Tapout-hoodies “event” that I would associalte with a club like theirs.

AJ may be a decent bloke but is not fit to hold Ali’s towel.. lets the bottlers have this one, suits them.

Ok we can stick to living in the past

Terrible getting away from spur’s ground.

Terrible just looking at spud’s ground. Honestly, what a revolting, bastard-like tumour they’ve dumped over there.
Coming back on the Stansted express the other week, the first sight of its fat, fake facade leering out of the gloom made me vomit in the window bin.
When derelict warehouses and the 1st world slums of N17? offer more appeal you know the designers fucked up. They must have been cheap because it’s an absolute embarrassment not only to London, but the human race itself.

Spurs and Eddie are well suited.

Out and out, truth be told.

Waste of money. Would be over in the first minute!!

Joshua is a Gooner, why would he want ShiteHartLane? Make it a home match Tony.

Isn’t he a Watford fan?

I remember hearing him say he was an Arsenal fan during his Olympic/early pro career. I suspect he’s not massively into football and being a Watford fan is much easier from a PR perspective (small club with no real rival fanbase, where he’s from etc).