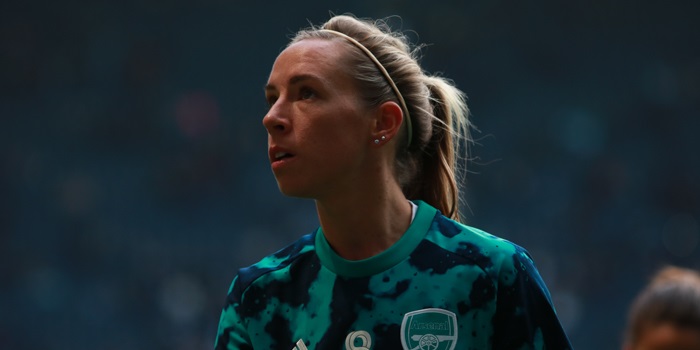 Jordan Nobbs is in her tenth season as an Arsenal player. On Saturday evening, she will lead the Gunners out in a cup final for the first time. Jordan is the club’s vice-captain but with club captain Kim Little injured, Nobbs will wear the armband at the City Ground against Chelsea on Saturday evening. As a long-time servant of the club, the prestige is not lost on her.

“Well, to wear the Arsenal shirt anyway has been a privilege,” she tells me. “It’s my tenth year at the club, so whenever I get to follow in the footsteps of Jayne Ludlow, Kim Little, Kelly Smith, Alex Scott, it’s an absolute honour whether it’s a cup final or not. To be a part of that and also Joe’s squad, it’s just a great place to be and if I had my time again, I would have done exactly the same thing I’ve done during my career because I’ve enjoyed every minute of being at Arsenal.”

While Nobbs is something of an Arsenal elder now, Australian forward Caitlin Foord will be playing her second game in the red and white on Saturday. Jordan says the Australian has brought a new energy to the club, “She’s been a breath of fresh air. I think even in training her work ethic is amazing, she wants to play little short balls and then runs in behind, she is a powerful player. I think she showed what a key part she’ll be to our squad and a great asset for Joe to work with.”

However, Nobbs admits that coming from Sydney summertime into the storm ridden conditions of English winter has presented a challenge for Caitlin, “One of the first things she said in training was, ‘it’s pretty cold here, isn’t it?’ I think she is looking for some good moisturiser!” Nobbs missed last year’s final due to an ACL injury obtained in November 2018, she still insists she is not at her peak form yet having returned in August.

“I think everyone that comes through an ACL injury would say it’s more about getting your rhythm back and you feel like you haven’t played football for a really long time. I’ve just had to believe in myself and it’s even taken a few words with Joe to just keep me confident and just get back into this team. Eventually you’ve just got to look at yourself and start performing.”

As a club stalwart, Jordan talks very much in the future tense, but with an awareness of the decorated history of Arsenal Women. That tradition of domestic dominance, she argues, has woven a winning mentality into the culture of the club. Arsenal don’t prioritise competitions, they don’t heavily rotate for the Conti Cup, a trophy they have won more times than any other English club.

With thanks to Molly Hudson from the Times.

Tim, thanks as always for giving us AWFC stuff. And thanks to Blogs too for giving you the space to produce it.
It’s gonna be a tough game today and Arsenal need to be on it from start to finish or we’ll be in for another disappointment but I have faith in the manager and the squad to come through.
After last year’s battle of attrition against City hoping for a more free flowing game today to take our minds off the cold, wet time we’ll be having in the stands 🙂
COYG!!