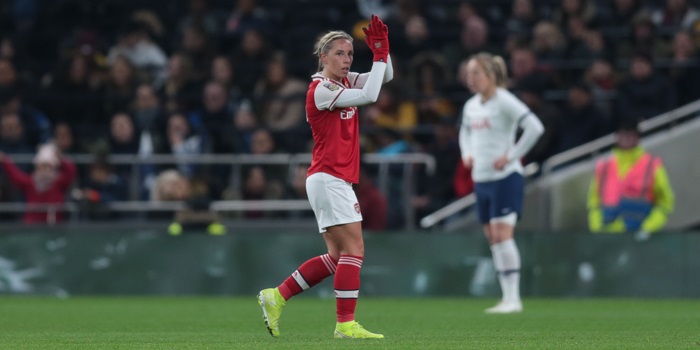 Arsenal midfielder Jordan Nobbs says that Arsenal v Sp*rs is beginning to feel more like a derby in the women’s game. This is the first season that the teams have ever been in the same division and, at time of writing, Sp*rs Women are yet to score a competitive goal against Arsenal after spending the majority of their history in the lower divisions.

Arsenal, meanwhile, are one of Europe’s most decorated women’s football clubs. Sp*rs were promoted from the Championship last season. They meet their North London neighbours at Meadow Park on Sunday, with the reverse fixture played in front of a record WSL crowd of 38,000 at the Tottenham’s revamped stadium. The Gunners were 2-0 winners on that occasion and Nobbs thinks that the big crowd and sense of occasion made the game feel more like a genuine rivalry.

“I think it did [felt like a derby] when we played them at the men’s stadium and the atmosphere and the vibe we had was unbelievable and it did feel like a derby,” she told us on the most recent episode of the Arsecast. “Yes, there is still a way to go and the fans are a big part of making it a derby and the way they are supporting us.

“But we still just go into the game looking for a win, we know it might be a bit more aggressive at times, but ultimately it’s probably more the media that pick up on the fact that it’s a derby. Every game in the league now is so big for us that we have to treat every game like a derby.”

Jordan also says the record crowd lifted the home team on that occasion, having lost 6-0 to Arsenal in August for a pre-season friendly. “They played a great game, we’d played them in pre-season and won very easily [6-0], but when we played there there was a difference in atmosphere and pressure which made it feel like a derby and it was a very exciting game.

“It was probably one of our moments of the season, playing there and playing against them, the more we can have games like that and feelings like that, the more exciting it is not just for us, but for the people watching.” Eyebrows were raised in January when Scottish left-back Emma Mitchell, who has played for Arsenal since 2013, joined Sp*rs on loan until the end of the season.

The move sparked debate among women’s football fans. Spurs have five other ex-Arsenal players in their squad, Nobbs says she can see why the move was contentious for fans, “It’s a difficult one because I’ve been here for a long time with Mitch. For us, it was more thinking of her as a player and a person to go somewhere to play and we fully support her. But from the fans, it’s nice to see that they see that rivalry.”

Sunday’s game at home to Spurs is now sold out, but you can read a full-match preview here and to hear the full interview with Jordan, simply download the most recent episode of the Arseblog Arsecast. Jordan also talks about the upcoming Conti Cup Final and coming back from an ACL injury. All of the links you need are below.

Jordan is an inspiration to many. Lovely person.