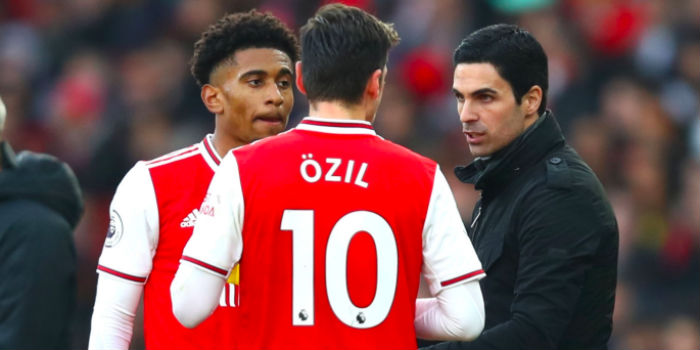 Reiss Nelson believes his long-standing relationship with coach Mikel Arteta stands him in good stead and he expects the Spaniard to help him deliver on his potential at first team level.

Arteta crossed paths with the winger four years ago when he oversaw Academy training sessions while studying for his coaching badges at the tail-end of his playing career.

Nelson is now hoping he can follow in the footsteps of Raheem Sterling and Leroy Sane, two wingers who both benefited from Arteta’s guidance at Manchester City in the last couple of years.

Speaking to the Guardian, he said: “I used to get the ball and just run past everyone – at the time that was one of my biggest traits.

“I think he has probably seen glimpses of that. I wouldn’t say it was too easy but now is a great time to have him as a manager because he understands what I am good at.

“He’s going to give me the encouragement when I need it and if I am not doing the right stuff he is going to tell me. I have all my belief in Mikel and I think he is going to make me into a top player.”

Arteta was quick to give Nelson game time when he took over from Freddie Ljungberg in late December. Unfortunately, injury has kept the England under-21 international sidelined in the last few weeks. It’s expected that he’ll return in the next 10 days at which point, he’s hoping to step things up.

“You look at the likes of Sterling and Sané, and you see them before at their previous teams, they weren’t doing what they do now,” Nelson says.

“I think that is credited to Pep [Guardiola], of course, but Mikel as well because they said he did a lot of one-to-one work with them. They are two top players.

“You can see it because Mikel’s drive is different. I haven’t seen a manager with that much determination to make individuals into better players.

“I was doing one thing with one of the players on the training pitch the other day. He came over and he showed me one thing to do and it is that little detail that is incredible. I think he has got a plan and it is going really good.”

Reiss has a relatively good start under Arteta before injury. The hope is, Arteta’s work with Sterling and Sane translates to Reiss as well and I don’t see any reason why it shouldn’t. Similar attributes to those two. Looking forward to seeing how Arteta is able to mould and develop our young players. Much different from being and assistant and working with players 1v1 than being the manager, but I feel confident we’re in good hands. Time to go on a bit of a run now and string some wins together. US Gunner here and a buddy of mine are… Read more »

As a US based Gunner who has been lucky enough to attend four matches at the Emirates over two trips, I know you will have a wonderful time!

Save lots of time (and money) for the team store as there is so much to choose from.

Also, if you’re going to be in London for a bit, I highly recommend the guided stadium tour. I had Charlie George leading mine. It was fantastic!

So funny story the buddy I’m going with and our significant others went last year October, the weekend we were there was international break and I think england we’re playing in Spain. We’d booked out tickets before the prem schedule came out so we’re so unlucky. But we did do the stadium tour and hit the store as well, I’ll definitely be going back to the store. We’re a week out from leaving and I absolutely can’t wait. We’ve seen pretty much everything but game so we’re looking forward it!

I hope so too, Reiss. I recommend the bbc sport article on him and Sancho growing up together. Their careers have polarised dramatically in just two years. But as comparisons go, there’s no reason whey he can’t reach a similar level. I’ve got a feeling it’s all in the mind Mikel.

“there’s no reason whey he can’t reach a similar level.” Similiar level? Like beikng top 5 player in the entire world of football right now? Sure. No reason not to! They are similar age and played on the same continent twice, so much in common.

Arteta seems to be well liked by the squad.

I’ve been pretty disappointed with his performances whenever I see him – he came to the first team set up young but he really has to kick on. Looks a bit complacent – could take a leaf out of a certain Brazilian’s book.

I know man. Crazy how a youth prospect wouldn’t thrive in our worst season for thirty years.

Wow, give the kid a chance. He has potential and I for one have more faith that Arteta can get it out of him now

Very Lord-ish statement.
Personally I dont see that potential in him but I would be gladly be proven wrong!

Football is a confidence game, especially for wingers. I’m sure Mikel will keep him in check. We know his emphasis on hard work.

Pepe needs to start performing, he’s been here 6 months, that’s enough time to adapt, and he’s not been overplayed in that period, he needs to step up now, or he’ll find himself moving behind Nelson in the pecking order. Our attack doesn’t function. Aubameyang is a number 9 playing wide, who’s more suited to the left than the right, but I’d much rather utilise Saka’s dribbling and crossing ability from the left. I love Lacazette, and think he does lot of thankless work, he’s a better all round footballer than Aubameyang, but doesn’t offer the same goal threat, or… Read more »

We really have to give Arteta patience, I know not easy given the shit storm of recent years but he’s the first coach I have seen with a plan and I see small but positive signs that should being us out of this mess

Are you santori in disguise? That was one LONG NEGATIVE post!!!

Some of Pepe’s struggles under Arteta are down to the system he plays as everything is centered around attacking through the left side as has been covered in depth on here. Pepe’s strengths are dribbling and cutting into shoot neither of which he really can do in the current system as he’s primarily supposed to stay wide.

In other news, Sp*rs are in the Oxford English dictionary for the words their supporters sing https://www.bbc.co.uk/news/uk-51479810 Controversial…

He needs to improve his confidence – looks scared and afraid to take on players (2nd point may be due to coach’s instruction) but at least now can be an acceptable alternative to Pepe – can’t have Pepe cut inside all the time.
Or, maybe try Pepe in the ST position?

Completely OT (not even sorry)
but how did we turn down the chance to sign Ziyech last summer for around 25-30mil? Overmars even said we should take him off their hands 🙁

We paid 65-70mil for Pepe, and we let Ziyech go to a rival. Are you surprised? We do this kind of shit all the time. Wenger will come out in two seasons and say he almost landed Ziyech. Same story…….So Fucked up!!!

Clearly Ziyech has the wrong agent…

Ziyech hasn’t played yet in England

I would recommend anyone to read the full interview over on the Guardian. I actually met him last year, seems like a top lad with a good head on his shoulders.

While talk is cheap and the only thing that really matters is winning, it is significant that so many players have come out and praised Arteta. The extent of the comments and their apparent sincerity gives me hope that indeed the LEGO-haired one will transform this dysfunctional group of divas into a championship-winning squad.

Hell yeah even!!! Love the impact Arteta is having on these players and I think something special is on the horizon ?

Now imagine if he can make nelson pepe, and bellerin and saka/ tierny all play like sterling and sane. Then we’ll have 4 lords of the wings to get us 80 goals a seasom.

Hope he gets back in soon. Pepe needs an alternative bc thus far he has been sporadic at best. Loses most of his take ons, doesn’t hunt them back, flails arm at ref instead.

Martinelli is potential on right with Auab back in left side but may need to find footing otherwise.

You people here are for rude awakening. Honestly you upvote posts about “dont see single reason why a player that doesn’t even have a shot yet, can’t reach levels of WORLD CLASS footballer taht commands over 100M fee at age 20. Same shit with Arteta.. it was JUST Arteta, nothing to do with number 1 coach in the world shaping these players. Arteta does some little training and suddenly that becomes the talking about, ignoring at the time theb est coach in the world behind the etire project. PEP MADE THESE PLAYERS. Arteta can’t even attack with bose side just… Read more »

The Only Olivier is Giroud
Reply to  Cmdn

Bit early in the morning to be off your head, mate.

Cmdm- I suppose your user signature is an abbreviation of CalMDowN? Or
what?

fair enough, he can’t attack with his Bose side.