It wasn’t a pretty match but Arsenal came away from the match with exactly what they wanted.

Arsenal went a long way from home and left Greece with an important road win, a clean sheet, an away goal and a commanding position to advance to the round of 16 of the Europa League.

Olympiacos 0-1 Arsenal: By the graphs 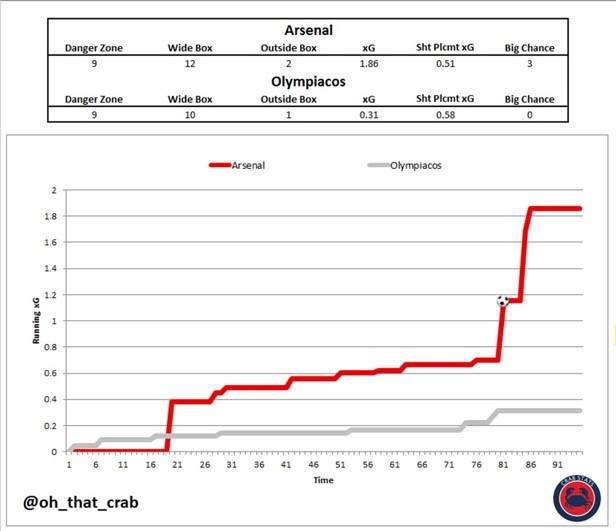 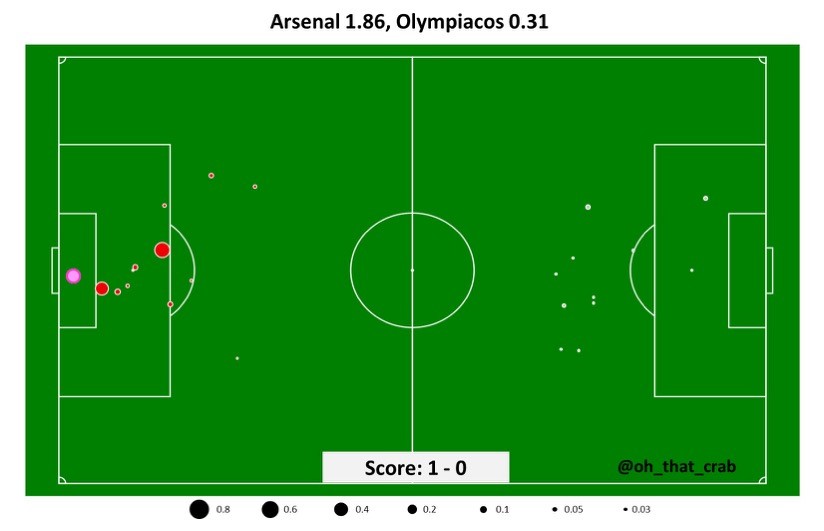 10 – Passes into the box completed by Olympiacos for the rest of the match.

0 – Shots in the box by Olympiacos for the rest of the match.

28.3 – The average distance to goal in meters for Olympiacos shots after the 5th minute.

13 – Possessions that Olympiacos advanced the ball within 30 meters of Arsenal’s goal after the 5th minute. This is out of 65 total possessions.

23 – Possession that Arsenal advanced the ball within 30 meters of Olympiacos’ goal after the 5th minute.

After a scary opening, few minutes (BR Live in the US didn’t start the stream until 1:40, just in time to see Valbuena just about to score) of the match Arsenal settled into relative control of the match. Olympiacos had a relatively even share of the possession but Arsenal’s defense kept them away from the dangerous areas of the pitch. One of the things that really shows this is where the ball spent most of the time, just 21% of the match was played in Arsenal’s defensive third with 27% in Olympiacos third. After the 5ht minute, Arsenal was also able to progress the ball to within 30 meters of the Olympiacos goal on 35% of their possessions compared to just 20% for Olympiacos. In the end, this led to speculative shots on goal by Olympiacos and a deserved clean sheet for Arsenal (3 in a row!).

68 – Passes completed, led all players with an 88% completion rate, on 87% expected completion.

5 – Final third entry passes, 5th among all players, tied for 2nd on Arsenal

5 – Progressive passes (passes that advance the ball at least 20% closer to the attacking goal) completed, 3rd among all players and 2nd on Arsenal

3 – Successful tackles, tied for 1st among all players

2 – Interceptions, tied for 5th among all players

It is kind of weird but since Mikel Arteta has taken over, Shkodran Mustafi has been really good statistically and outside of one really bad error watching him he hasn’t made that many brain dead plays that stick in your memory. He is still prone to make rash decisions but the current system that Arsenal are playing has done an excellent job to minimize the opportunities for these to happen. What this has meant is that his good attributes have come to the forefront and have been very positive to see. When he is paired with David Luiz, Arsenal have two very good ball playing center backs. With Arsenal playing a more possession-based game he is asked to be the more aggressive of the two centrebacks and his quickness in challenging balls is very helpful both in the air where he is excellent and on the ground where he is just pretty good. Overall if because he doesn’t get put under pressure as often the big mistakes don’t happen once or twice a match and instead are once every three to four matches… maybe he has a future as a center back on this team.

4 – Passes completed in the box, tied for most among all players

1 – Chance created, the big chance cross that was converted for Arsenal’s goal

After the match, Arteta mentioned that Saka is not a fullback. That is true but he is showing that he has the skills to play at this level and that he is doing it while playing out of position is even more impressive. In this match, his technical level was one of the more impressive things about his game. He plays difficult passes and completes them at a good rate, his ability to control the ball is important as an outlet for teammates under pressure, his ability to beat a man destabilizes defenses and his ability to find players with crosses is impressive enough to make those lower value chance creation types decent options when he attempts them.

Mustafi does hit a lovely crossfield diagonal. Now if he can maintain the lost art of defending without fucking everything up then I’ll keep an open mind.

It’s funny, I listened to the first 75 mins on the radio, talk sport, they were gushing in their praise, as Scott describes, after 5 mins, arsenal took control of the game, and looking at the numbers, could of won by more, however BT seemed to have some sort of narrative that Leno was MOM, for making one save, and a couple of punches, strange !!

The save wasn’t even that difficult. The missed header was the one that could have cost us.

Duno
Reply to  The Mickster

No point dimming one’s candle to make another’s brighter, Leno made excellent saves that kept us in the game.

Abu played much better on left. His link up play with Saka is very important. Mustafi, what a turnaround.

I’m not sure LB isn’t actually his best position. His defensive work is incredible. So impressive. Compare him to Martinelli, who’s work rate is exceptional, but he has a certain mad chicken character to him on defense (he chases with frenetic intensity that does often lead to extra space for attackers), whereas Saka is deliberate when he makes challenges, closes down at the right time and almost no-one beats him. Add to that his exceptional attacking skills and I’m not convinced we have a better LB in the squad (maybe Tierny proves it and although his attacking skills also look… Read more »

He did pass the ball to the opposition once but win it back instantly, does that not count as a loss of possession?

Lost possession typically means having the ball taken off of a player.

You have a point. We need a stat for when a player gives away possession by passing to the other team. Give away the ball is a loss of possession….?

The pass thingy is reflected with the pass completion stats.

Thanks again for your work, Scott, it’s appreciated.

Mustafi has been immense since Arteta took over. While I would like to see more of Rob Holding, it’s good that Mustafi has at least stepped up and at the very least might increase his transfer value if he does leave.

Does the David Luiz deflected almost goal count as a shot?

I think it’s counted as a blocked shot.

How was the header that Leno saved not considered a big chance??

It was offside ..it wouldnt count anyway

It was actually called offside after the fact