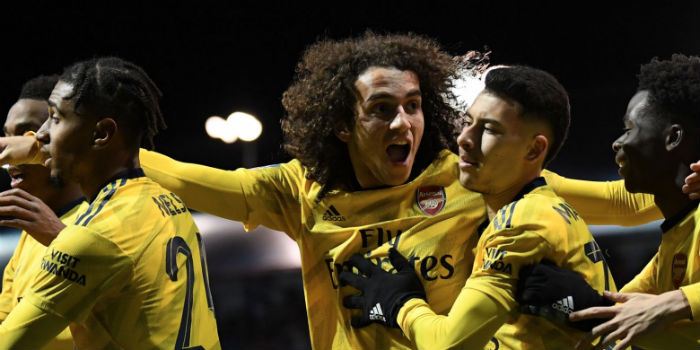 Mikel Arteta says playing Arsenal’s kids is worth the risk and that he’s really enjoying the chance to coach a group who are both talented and hard working.

The Spaniard took a chance fielding six players under the age of 20, including four who’d graduated from the Gunners’ Academy, for last night’s FA Cup trip clash with Portsmouth, but was pleased with the way they performed as we secured a place in the quarter-finals with a 2-0 win.

Reiss Nelson starred with two assists, Eddie Nketiah got on the scoresheet, Bukayo Saka produced another composed performance at left-back, while Joe Willock, Gabriel Martinelli and Matteo Guendouzi were energetic and physical in equal measure.

“It’s a difficult place to come but I have faith in these kids,” Arteta told BT Sport.

“They always respond and I always knew they would do that. They have to learn from the difficult moments and manage them but they have the talent and desire – look how hard they work.

“The clean sheet is really important and we defended set-pieces much better.

“We have pace in a few players up front. Reiss [Nelson] is a special player and can eliminate players one on one. He’s been out for a while but he’s back now and he showed what he’s capable of doing.

“I’m really enjoying working with this group of players. It’s a process. I know [people think] everything has to be today or yesterday but in football it doesn’t happen like this.

In his post-game press conference, he added: “I am pleased with all of them, the kids really responded really well.

“The energy…I was looking at them in the 94th minute and they were still pressing and going and chasing. It is a joy and I am really enjoying working with them.

“They fully deserve the chance and I don’t know if it risky to play them in this competition but they are worth a risk.”

Given the club’s established stars have often been the ones who’ve failed to deliver when it matters, it’ll be curious to see how the boss treats the closing months of the season. He may well be tempted to stick with youthful starting lineups as he lays the foundations for the years ahead.

One Academy graduate who appears to be fighting for his future at the Emirates is Ainsley Maitland-Niles. The 22-year-old has fallen down the pecking order both as a midfielder and auxiliary right-back leading to much speculation about his relationship with Arteta. Last night, the boss addressed the situation head-on.

Not so sure about Willock but agree with you in general.

Maybe he won’t be first XI regular but he’s good enough for the first team squad. Personally I think ESR has the bigger future if he can stay injury free.

To be honest, I can’t remember anyone writing off Gnabry at all. He was having a great breakthrough season in 2013/14 until his injury. The potential was clear to see. It was a long layoff with his injury. After that he had unfortunate loan moves which were not helped by the club and that cunt Pulis. Then he decided to move on even though Wenger wanted to keep him.

I get the impression that matteo has been heavily influenced by emery during an important development period. He is currently always looking to pass sideways or backwards and I seem to recall he was slightly more offensive minded when he first played. The number of times last night when he could have turned in space but just immediately laid the ball off straight away. I want to like him but not currently sure what he does… Or can… Bring to the game.

He was much more positive in the 2nd half I thought.

Guendouzi is 20. Players physically go up a level between the ages of 22-24 Look at Ndidi at Leicester, signed at 20 for £17million, was inconsistent for 18 months, turned 22, had a good level of experience behind him, then started producing consistently. He’s now got over 100 PL appearances behind him, and if you could convince Leicester to do business? would cost at least £80million. If you want to sign the 23yr old Guendouzi, with 140+ games behind him? He’s going to cost you much more than the £7million we paid. Guendouzi will have just 2 years to run… Read more »

This is the mindset of the Arsenal fans. When the youngsters are firing they are incredible, when they have a rough couple games they are a waste of space and we should move on from them…except Jack, he could play poorly and act like a spoiled brat-dick and he was the king. I wonder if anyone else notices the patterns.

And he sure knows how to get under the skin of Mike Dean.😀

“The kids are alright!”

This is a wonderful club that is seriously encouraging/embracing the young players.
Compare with Mourinho and Troy Parrott …………what a control freak……regularly lecturing the young lad In case he has the audacity to establish his own personality. He may well be a basket case before he’s 20. Poor lad. ( he’s Irish, so am I , and I’m interested)
Please, please Jose , stay at Spuds for a while.

Certainly so. A bright spark in an otherwise bleak season. Good to see Wenger’s policies being continued even if we have not been able to replicate his consistent fourth spot pot and FA cup wins. BUT Nketiah looks bright, knows his way to goal, proactive and attacks the space in front rather than wait for the ball to be played to him. Nelson also a good alternative to the otherwise over complicated and lazy Pepe. Martinelli will be key particularly if/when we lose Aubameyang, as both surrogate striker up top and coming in from the left side ala the Gabonese.… Read more »

I’m glad Arteta has faith in the kids, because while they might be talented, they’re going to be all we have if we fail to land a CL spot for next season.