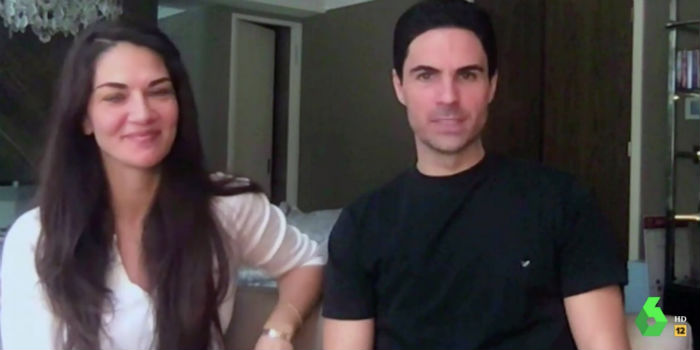 Mikel Arteta has revealed more details about his coronavirus diagnosis and confirmed he’s now recovered from the illness.

The Spaniard tested positive on Wednesday 11 March, six days after contact with Olympiacos owner Evangelos Marinakis, who admitted he’d also been ‘visited’ by the virus.

The Premier League agreed to the immediate postponement of the Gunners trip to Manchester City, Arsenal’s players went into self-isolation and within a matter of days, the entire football calendar was put on hold.

As things stand there will be no live football at any level in the UK for at least another five weeks and Arsenal today confirmed that players would not be returning to training while the government urges people to minimise contact with others.

“I’m very well now, I feel that I have recovered,” the 37-year-old told Spanish TV station La Sexta via webcam.

“It took me three or four days to start feeling much better and with more energy, to leave the symptoms behind and now, the truth is that I feel very well.”

Reflecting on how the situation played out. He added: “Everything happened very fast. On [the] Tuesday afternoon I was feeling so-so and I went to see the doctor but he wasn’t there.

“I got a call from the board of directors after training while I was in my car and they told me that the president of Olympiacos [Evangelos Marinakis] had tested positive and everyone that had been in contact was at risk.

“I went on to tell them that I wasn’t feeling well and that we had a situation because we had lots of players that had been in contact with them [Olympiacos]. We had a game against Manchester City the next day and obviously we couldn’t put lots of people at risk without saying anything.

“I had the test done last Wednesday and I was diagnosed on Friday, when we had to communicate it to the Premier League that I had tested positive.

“Obviously all those that had been in contact with me had to go into quarantine, and consequently, games had to be suspended.”

Glad you are feeling well boss.

Too Drunk To Be Offside
Reply to  Arsenalista

Sure, but please share more info, Mikel if possible. What the symptoms were, what meds you took, any suggestions for those suffering from it, etc.

KongoKim
Reply to  Too Drunk To Be Offside

No. Symptoms are different from person to person. There is currently no vaccine/med out there which cures covid19, only meds to mild the symptoms.
For example if he is saying i had symptom A + B but not C, people with symptom C will pobably feel safer. This leads to people disignoring symptoms, even tho not feelin sick, and spreading the virus. This might sound a bit far-fetched but it think its better for public figures not to speak out to much about their individual process.

Glad for you boss. May we have even better news in the days to come so we can have a healed, better world as we also get back to the game we all love.

Good to hear. I tested positive as well. Felt pretty lousy for about eight days, with low energy for a few days after that; the dry chest cough lingered a bit as well. Now I feel perfectly fine. All in all it felt like a mild flu. Handled it with paracetamol, that’s it.

A mild flu with the worst joint pains

I never got joint pain. Aches and chills for sure, though. Weirdly, I completely lost my sense of taste and smell.

I’ve had the joint pain, low energy and cough but food tastes fine.

9 days in and that’s exactly where I’m at

No, not before. I noticed I wasn’t tasting anything after one or two days of getting the chills.

Although, it may be that I couldn’t taste before that, and only noticed it later.

Apparently, the loss of taste and smell is not that uncommon for people suffering from the Coronavirus. Hopefully you got it back though.

Oi! Good to hear! Lucky u got tested, u workin in public space or u had contact with a positive person?

Are you considered “immune” now, or has that idea not been completely validated?

That’s a good question. I assume so, but I plan to chat with my doctor in a follow-up tomorrow.

Glad to hear that Mayor McCheese!

It’s very interesting you mentioned about the taste. Recently there was an article on that, physicians discussing about loss of taste and smell among Coronavirus patients.
It’s not uncommon among viral illness of the nose and throat. If you think about it, when you were a kid, how would you take down nasty medicine?….by pinching your nose so you wouldn’t taste it.

Happy to hear about your recovery as well!

Just a question. Has anyone else at the club tested positive for Coronavirus? Seems strange that only the head coach picked it up and not anyone else. Have they all been tested?

Only symptomatic people get tested. It’s more to test those who actually need it.

Ya Gooned
Reply to  Evaristus

fortunately for them some don’t display any symptoms at all, although they are still vessels for the spreading of the virus. It’s why I suspect many more people have had the virus perhaps without even knowing.

Let’s hope those most at risk come out of this ok.

I think most or all the players hit the showers almost immediately after first contact. The manager on the other hand may have taken a bit longer.
Also, I think it’s also good PR witholding info on the number of players who may have fallen ill too, if any.

Four Portsmouth players have tested positive for it. Of course we played them four days after the Olympiakos game.

Could have been hairy, but it looks like that hasn’t been affected at all.

What an uplifting news! Be strong Mikel, we’re with you in prayers!!

Regarding the photo, what an utterly beautiful looking couple of people!!! I’ve so far not had the virus but I think I might go into self isolation as I now feel so incredibly ugly…

Glad he recovered. We are lucky the rest of the team didn’t test positive. I really can’t see any games played this summer. B safe….

I am a resident physician in NYC. Please for the love of God, stay home. I have seen patients as young as 17 placed on ventilators for respiratory failure caused by this virus. Regardless of how mild symptoms may be for some, for others, this virus is deadly.

db10s
Reply to  A Doctor

How’s the testing carried out in NYC? Seems like all countries are doing their own methods. I am not qualified to talk but shouldn’t there standard method globally now? Just curious.

How people react in times of need shows their real character. Mikel immediately thought of the wider picture and the safety of those around him.

Just imagine when football starts again. People are going to go nuts at the first game.

Just a quick fuck you to the shameless cunts who shared snippets from the Fabregas interview early.

And a big thank you to blogs and Fabregas for a great interview, always nice to listen to two Arsenal legends on a sunny Tuesday morning.

So unrelated, BUT that Cesc podcast brought tears to my eyes. Thanx blogs, amazing work. Cesc will be back one day with Santi and Mikel. 🙌