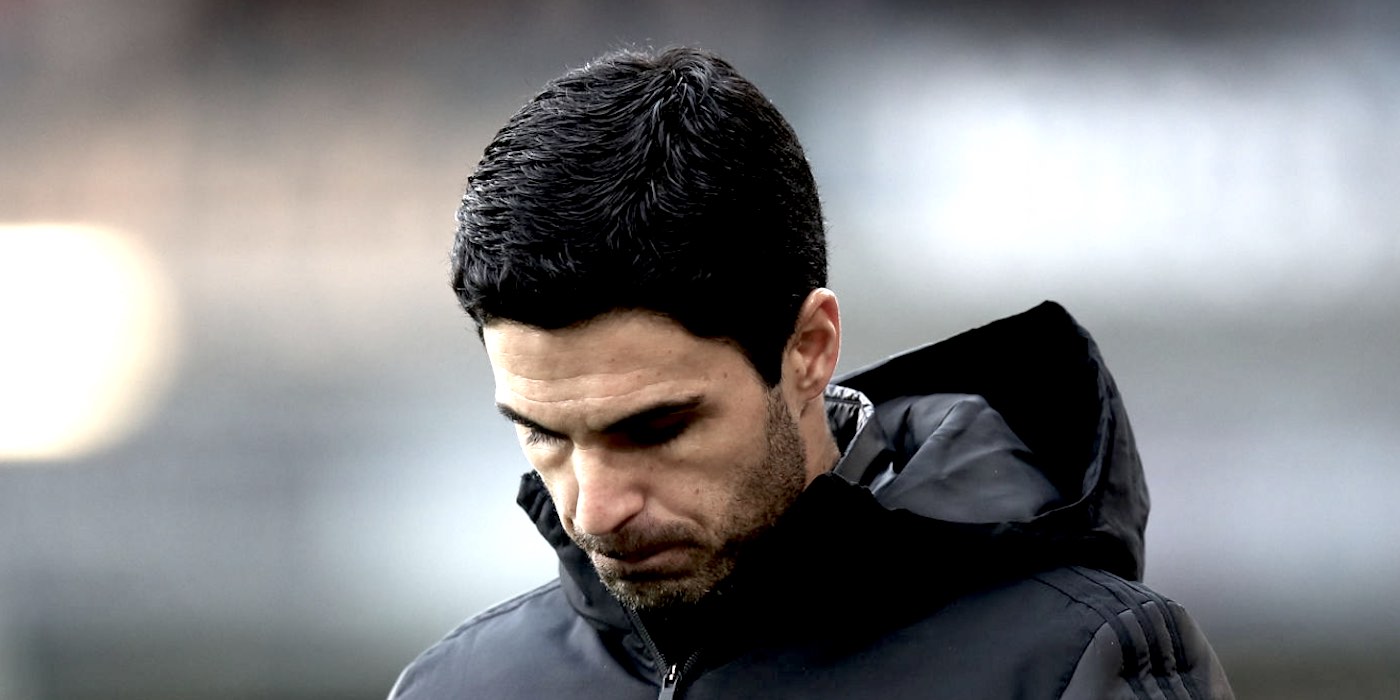 In worrying news this evening, Mikel Arteta has tested positive for Coronavirus.

The Arsenal boss was tested after feeling unwell and the club have released a statement via the official website this evening.

Our London Colney training centre has been closed after head coach Mikel Arteta received a positive COVID-19 result this evening.

Arsenal personnel who had recent close contact with Mikel will now self-isolate in line with Government health guidelines. We expect this to be a significant number of people from Colney, including the full first-team squad and coaching staff, as well as a smaller number of people from our Hale End Academy which we have also temporarily closed as a precaution.

We expect those who did not have close contact with Mikel to return to work in the coming days. In the meantime our Colney and Hale End training centres will undergo a deep clean and our other club sites are operating as normal.

We will work with Public Health England on the next steps in regard to our facilities and staff, and with the Premier League, Football Association and relevant clubs around our forthcoming matches in the Premier League and Emirates FA Cup.

It is clear we will not be able to play some fixtures on their currently scheduled dates. We will update supporters who have tickets for forthcoming games with more information as soon as possible.

We are now working to trace any other people who have had recent close contact with Mikel. We will let them know what has happened and they should follow the NHS guidance which is likely to recommend self-isolation.

Arteta says, “This is really disappointing but I took the test after feeling poorly. I will be at work as soon as I’m allowed.”

Let’s hope that as a 37 year old man he’s well capable of dealing with this, but the implications for our season remain to be seen.

Meanwhile, the Premier League have announced that all games this weekend should go ahead as normal.

I’m confused, is the Arsenal game on the weekend not postponed?

As a very healthy 37 year old, I’m positive he’ll be fine very fast too. Covid ‘needs your body fluids to be unhealthy’ to have a chance as you can see that kids with high viral load don’t get sick. The body is made up of individual cells and Mikels cells have spent less time immersed in Alcohol, fast food, carbonated drinks(🤔)etc (ungodly shii)

Get your immune up.

Psychologically I’ve observed a ‘Denial mentality’ and also the effects of ‘Shock’.

Importantly, I think the governments should be warning people about ‘Shock’ and taking decisions and actions due to this.
People are shook bro, as they should be. They were living life however they wished with completely different bothers days ago

Damn. Get well soon we need you boss you have our full support

Oh fuck! Surely now the PL has to cancel all the games – they surely CANT be this incompetent!

Right Across Sunderland!
Reply to  thankyou22

Sadly, I believe they can. The EPL is a global product and money talks.

They clearly can be that incompetent, and don’t call me Shirley.

“You’d better tell the PL to cancel games as soon as possible. This man has to be gotten to a hospital.

“It’s a bit building with patients but that’s not important right now.”

Frank Drebin is a Gooner

Joey, have you ever been in a Turkish prison?

Picked one hell of a day to give up glue sniffing!

Calm down, get a hold of yourself!

The announcement that all games will go ahead was before this. 3 Leicester players also waiting on tests. You would think that now Arteta has tested positive, then west ham from last weekend should also be on alert and wolves who played olympiakos (probably how arteta has contracted) need to on alert.

Only solution is suspend the league. Which would also be hilarious for liverpool’s title.

Right Across Sunderland!
Reply to  Goontang

I agree that watching Klopp and the bin dippers lose their shit will be entertaining, but the bigger picture is that we try to stop there being too many funerals. The scousers needs are secondary. If the virus is controlled and we can finish the season, let’s do it. If not, we cancel it and start again.For all divisions. I can’t see an alternative. Why should 91 clubs (plus the semi pro leagues) all follow a program the scousers set? Like they thought about other clubs in the mid/late 80s when they got clubs banned from Europe? Oh, sorry. They… Read more »

Oh, fuck!!
looks like the Brighton game is off!!

Fucking hell, fatgooner is back. Or is it that I’ve been away for ages. Sad bit of news but I hope you’re well pal.

Get well soon boss.. I hope you and your hair recover well from this illness..

What IS with his hair–just some seriously black dye?

Get well soon boss! This is especially heartbreaking… 😭

This is absolutely mental, get well soon boss.

My victim complex about refs, media, now extends to viruses. Why always us?

Don’t worry, it won’t only be us, this is just the beginning.

Arsenal, always ahead of the game……

Why hasn’t the pl been canceled yet? Just nuts

This must surely mean a cessation of football for the foreseeable future.

Hopefully this will pass over the coming weeks with minimal suffering and if everyone’s inclined the season can be finished in summer.

Best of luck to Mikel and all those affected. Fingers crossed for you all. A time when football becomes irrelevant. Stay strong.

Surely the Premier League have to respect this and cancel the Brighton game? Or are they a bigger bunch of money grabbing cunts than I thought?

The whole squad is in isolation for 14 days, and that’s if they are all negative, so we wont be playing at either Brighton or Sheffield.

You know that Emery would never have got it.

In all fairness, vampires naturally can’t get ill…

I put the odds at eben

Would like to see the season postponed for 2-4
Weeks. Possibly cancel euro 2020 for 1 year.

Just write this season off totally. No relegations and more importantly, no title for liverpool

Am I a bad person if I feel just a little bit glad that pool won’t lift the title?

Insane that they’re playing games this weekend, absolutely fucking insane. And this is just the exclamation point I left out of that sentence.

All games canceled in the Netherlands! England, wake the fuck up.

Everyone who has had close contact with Mikel will be quarantined– aka– our entire team and coaching personnel, at the very least. Surely this means the end of games this weekend as the Arsenal team will be in quarantine. Hopefully there just wasn’t enough close contact between everybody that caused it to spread rapidly among players and staff.

He’s obviously been in contact with the entire squad, so the game this week has to be cancelled as we can’t field a single player. This is unprecedented and deeply worrying.

They are going to have to suspend the PL. Players, managers, staff all testing positive, it will only spread even further, this is unprecedented. They need to take drastic action now before we have as many cases as Italy!
More importantly I wish Mikael and all others who are ill a speedy and safe recovery.

I’m hoping this is a bad dream.

All games off now. This is nuts. And Klopp can do one if he isn’t happy.

Was it a virus or a trojan horse?

If Mikel has it, then quite a few of the squad may have it too. Tests and cancel the season.

Liverpool’s title? Who cares? More important things to worry about for now

New virus (strain), Everyone’s naive, Everyone should get a shot

Wow, if he has it other members of the squad certainly do as well. Can’t believe the league has not been suspended already.

Seems players at other clubs are unwell too (Leicester, for example).

I think all sporting events/concerts should be cancelled for 3 weeks now. Will Boris do it? He has too, surely?

Or we can just ignore it and end up like Wuhan.

Jim
Reply to  Right Across Sunderland!

Here in Italy we HAVE shut everything down here and it’s still spread like wildfire, 40 cases to over 15,000 in two and a half weeks, other nations need to act now.

My friend and colleague flew to Dublin on Monday, to escape the impending lockdown, she wasn’t checked once entering Ireland or given any advice, same as in Malpensa airport.

Right Across Sunderland!
Reply to  Jim

Don’t want to be too judgemental about what must be a stressful situation, but that is a pretty reckless and selfish thing to do.

That’s fucking nuts – at both ends.

https://www.theguardian.com/world/2020/mar/13/how-taiwan-is-containing-coronavirus-despite-diplomatic-isolation-by-china This is what the country (province) right next to China has done that has proved so effective. Our government has proved to be outstanding ……at complacency!! They said that the first strategy was containment….well how the f##K is allowing mass public gatherings containment. And if you are infected at a large event how can you do contact tracing. The only thing that makes sense is they have realized that 10 years of austerity has left them woefully under prepared and their entire strategy is about mitigating the decisions they have made previously! sorry just had to get that off… Read more »

Get well soon Boss. My prayers will not cease for you. We expect you back and better very soon.

Our game MUST be postponed. Utterly ridiculous if it isn’t.

It’s not really an option to play/expose.

Best wishes to Mikel and all players. Cancel the season.

Thank god the game is off.

Best thoughts to Mikel and all others affected.
I’d be very surprised if they don’t cancel other matches besides the Arsenal one.
And I will accept full responsibility for this…clearly as both an Arsenal and a Utah Jazz fan, there’s some sort of hex involving my teams getting things first.

Whoever made that decision to make Wolves go to Olympiakos should be fired. What a plank!

DaDude
Reply to  Right Across Sunderland!

Basically Wolves made the decision. The Greeks wanted to call it off. Wolves insisted it goes ahead. I guess with both teams wanting to call it off, UEFA would have agreed, like they did with 2 other games.(Inter Milan – Getafe for example). But if Wolves want to play and the Greeks refuse to host the game, I guess UEFA would have eliminated Olympiakos.

However, during the broadcast of that game, they said that all Olympiakos players were tested negatively, so in theory they should all be safe.

Right Across Sunderland!
Reply to  DaDude

That’s not what I heard.

Get well soon Mikel!
Nothing more to say. Gutted.

That’s the league done this year then. See you all in August 2020.

This is awful. Hopefully Mikel gets well as soon as possible and as few Arsenal staff as possible also have it. Stay safe everyone!

Call off all games FFS

Been supporting Arsenal since 1978. This is now officially the worst season ever.

Wake me up in August.

He should recover. He’s fit. Covid usually does greater harm to people with underlying health issues.

wishing him the speediest of recoveries, get well soon gaffer.

let’s hope there was minimal virus exposure to his family and the team and that everyone will be okay.

at this point, the most logical and sensible thing would be to suspend the league, at least temporarily, to prevent unnecessary transmissions, as the virus has almost definitely seeded within players and/or coaches and more people are going to start testing positive from here on.