Arsenal bounced back from the crushing defeat on Thursday with a well-controlled win over League One side Portsmouth.

Portsmouth 0-2 Arsenal: By the graphs 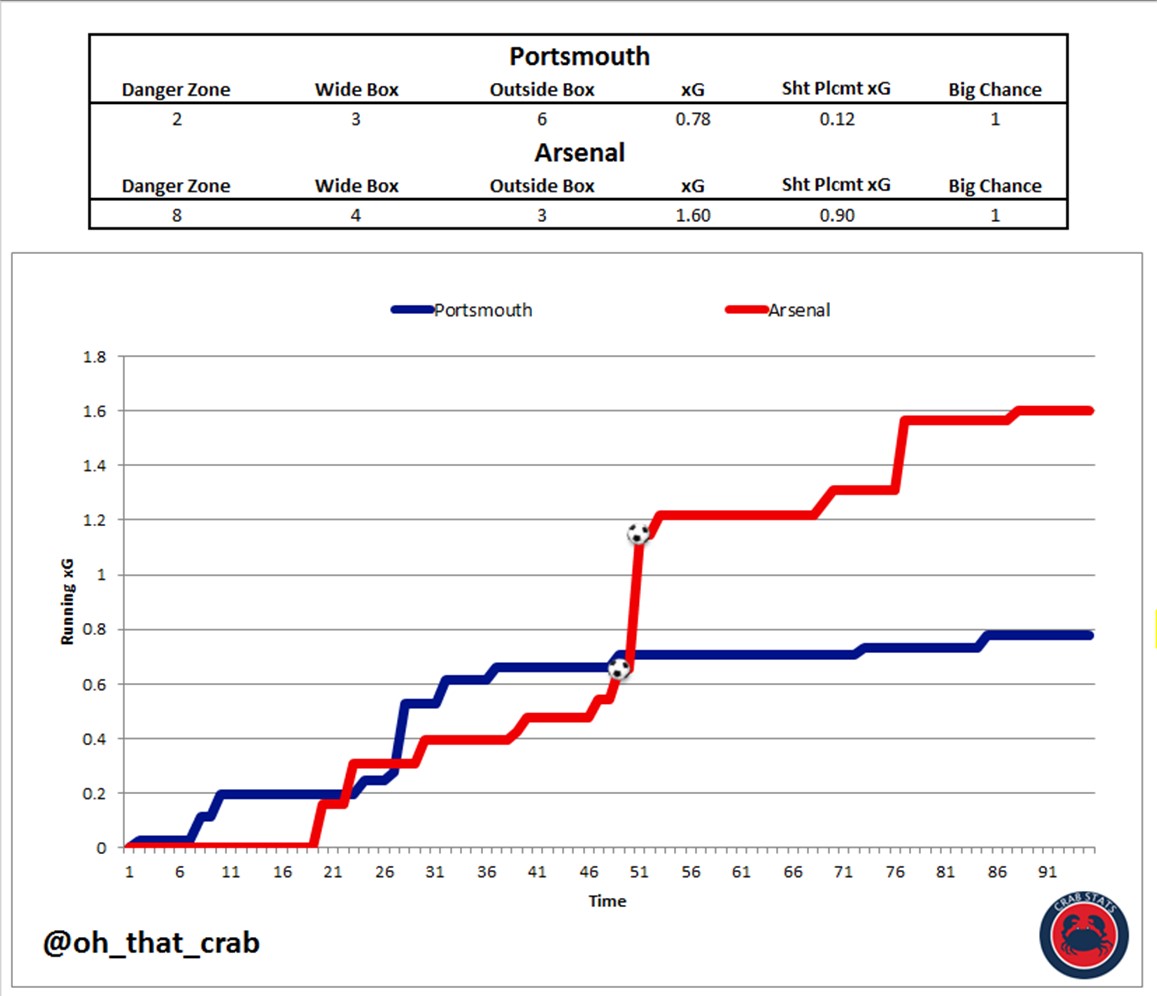 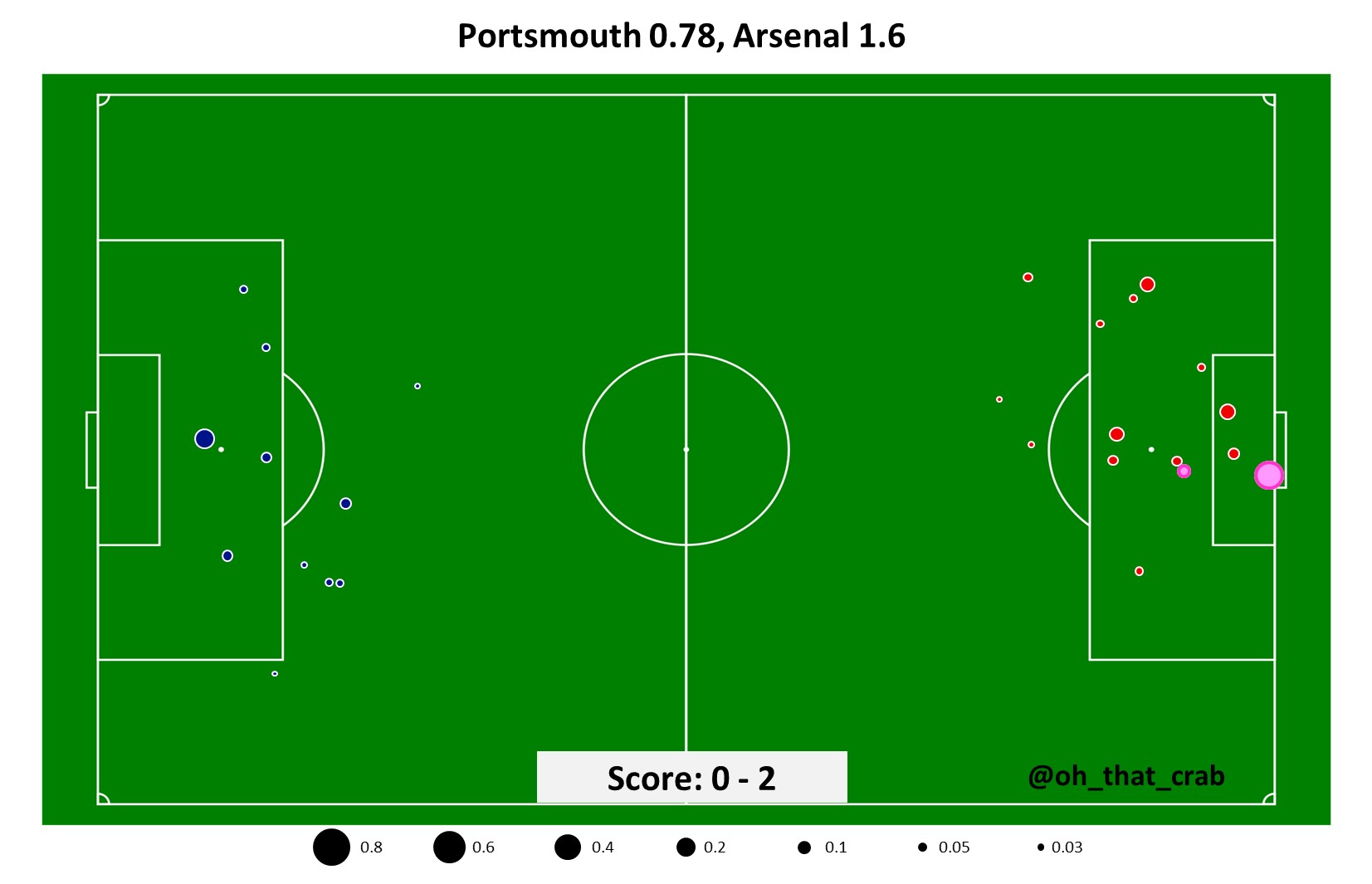 4 – Fouls committed by Portsmouth in the opening 22 minutes, that doesn’t include the near ankle breaker on Lucas Torreira that forced him to be stretchered off. They would commit 4 more for the rest of the match.

3 – Shots for Portsmouth in the opening 22 minutes to Arsenal’s 1. The extra physical (with some help from Mike Dean allowing it) nearly paid off as Portsmouth had the better of the attacking opportunities. They would take 8 more for the rest of the match.

3 – Shots for Portsmouth after Arsenal scored their first goal.

4 – Touches in the box for Portsmouth after Arsenal scored their first goal.

Portsmouth were up for this match early but after a strong opening, 20 or so minutes Arsenal were able to take control and see out a fairly comfortable win, especially after scoring a goal on either side of the half time whistle.

Reiss Nelson, Man of the match

76% – Pass completion percentage, 93% excluding crosses (I am not sure why Whoscored excludes crosses when they show passing rates). My expected passing model had him at 65% for the passes he attempted, so he was well above expected.

11 – Progressive passes (passes that move the team at least 20% closer to goal), led all players

7 – Completed passes into the box, led all players

Nelson has seen his chances in the first team limited over the last few weeks but in this match, he made the most of the opportunity to make his case for future inclusion. Among the Arsenal front line, he was the creative hub, leading the team in chance creation and deep ball progression. It was even more impressive considering that he essentially had to run the right side of the attack all by himself with Sokratis playing out of position as the right back in this match. This performance might not get him an automatic start next match but it might get him moved up the pecking order as an option for an attacking substitute.

29.6% – The percentage of his total touches that ended up with him giving the ball away.

67.4% – Pass completion percentage, my expected passing model would expect an average player to have completed around 84% given the passes he tried.

I am a little confused about why Joe Willock has gotten so much playing time with Arsenal this season. It has happened under two consecutive managers, so I don’t think that is that he is a personal favorite or anything. I watch him play, and what I see is that you have a great athlete, who tries really hard but looks to be lacking in the technical quality to be played in the position that he is being asked to play in. I don’t want to write him off, or to denigrate him but too often for me, he either fails to make much of an influence on a match through minimal involvement or like in this match, when the ball reaches him too often it is turned over to the other team.

1 – A request, to fill out a survey on how you feel about the current state of Arsenal. I have done this every couple of weeks and post the results on the Arsenal Vision website.

I know that I’m gonna get downvoted for this, but the truth is that Joe Willock has been out of form for a long while. I know that he’s still young and all other excuses being made on his behalf, but I honestly don’t rate him (up to now). He really to improve his ball handling and general technical ability on and off the ball.

His poor performances have come when he plays as CAM. At CM his athleticism is more useful.

We 100% have to recruit in the CAM role next year. Get Ozil out – his contract is killing us as is his lack of goals and poor physicality on defense. We need a modern CAM that gets into the box (at least Willock does that – although his finishing is lacking), drive through midfield (Willock’s best attribute), has the ability to pick a pass (this is really where Willock struggles right now), AND is tenacious in closing down and pressing (another Willock strength). Willock has the game to be really good, but I agree his technique, final ball and… Read more »

Agreed completely — like Ceballos, I think Willock will thrive playing a deeper role. He’s played much better back there earlier in the season. Smith-Rowe looks a much more natural CAM/#10 with impeccable ball control, quickness, and a good burst of speed.

Charles you are going to get downvoted but fear not many of us have the same opinion.Willock will have a career as a professional footballer but for Arsenal he just doesn’t cut it at the top level.

Said the same thing, I hope he goes on to prove my black add wrong but I just don’t see what others see. Like Scott said, he lacks technical quality. He can’t pick out a pass to save his life. I don’t even think he’s that athletic; always falling over and it’s not like he has blistering pace. A creative midfielder should be top of our shopping list.

CAM is a pretty demanding position and you need someone who is really intellegent to assess a situation and adapt rapidly. In the first half last night we saw multiple situations where our entire attacking line were very high upfield and with Ceballos filling in as left back for Saka, we had no apparent mid-field presence. There were so many times that Luiz and Sokratis were carrying the ball and trying to find our forwards, mostly unsuccessful, which is a less than ideal situation. I would have expected the CAM to understand that and drop in to carry the ball… Read more »

I think you’re spot on about Willock; I don’t think he has the technical quality to be even a squad player at a club like this. I suspect if he does have a future here, it would be as a deeper lying player where he’d have more time to pick his passes, and where the good things he does (run like hell, make the occasional burst forward, a knack for finding good spaces on the pitch) will still shine while limiting the number of times he has to the things he finds harder.

Have to admit I had many reservations regarding Nelson (in the same manner as people question Willock now), but if he manages to keep up the performance as he showed last night, now that’s really encouraging. Hopefully he does!

I’d like to see Martinelli in the Ozil role over Willock. Drive, finish and rend product. Could also press like no one else from there.

He’s also got an eye for a pass.

I’ve heard a few people say that Joe is a good or great athlete, but I don’t think that’s the case at all. He’s easily muscled off the ball, doesn’t have the greatest gas tank and isn’t particularly quick.

I do, however, think that he’s studious and rads the game fairly well. He looks to be a good finisher and times his runs into the box well. Of all of our young stars, a loan would do him the world of good.