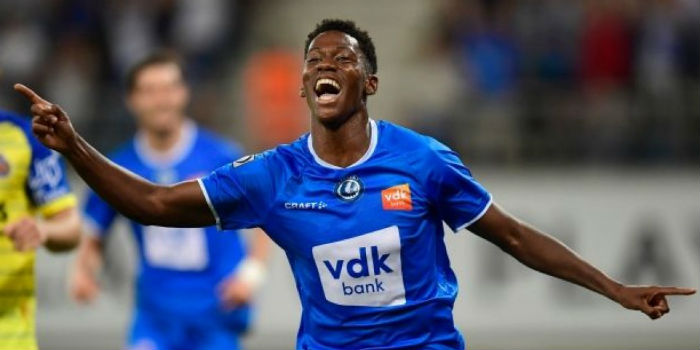 The 20-year-old Canada international has been plying his trade in Belgium for two seasons; scoring 37 goals in 82 appearances.

However, with doubts over whether the Gabon striker will commit his long-term future to the club, it’s unsurprising we’re putting feelers out elsewhere.

Without wanting to sound too snobby, a New York-born Canadian playing in Belgium could well be the most Europa League signing ever. But I guess that’s where we are these days.

For what it’s worth, Watts reports that David is also being tracked by Manchester United and Leicester and that he could be available for £17.5 million.

Report: Lacazette allowed to leave if Gunners miss out on Champions League

Check out football365 today, this kid is highly rated!

I’d rather clamp my nuts to a combine harvesters rotary blades than look at that football365 website.

Football 365 do good work. You must be confused

This could be a great depth signing for Arsenal

Oops I thought I read ‘ever’

Nicholas Pepe would, too.

And Ainsley Maitland-Niles too

Although technically all Muslim names are first names.

Not sorry and nor should you be!!!

As a Canadian it has been a dream of mine to see one of ours represent Arsenal. While Alphonso Davies is the great white hope for us (and deservedly so) Jonathan David has been fantastic since he made the jump to the men’s national team.

He’s not a worthy replacement for Aubameyang (who is that Arsenal could actually afford?) but he’s an exciting young player which fits with how we need to build our team if more lean years beckon.

What about Nico Pepe? doesn’t he have two first names?

Very sorry for all!

Out of interest Blogs, would you also have been underwhelmed by a Norwegian plying his trade in Austria?

Who was born in England!

I guess it depends how you actually fare in a league like Austria. I saw many Austrian league games of Red Bull (even though I hate the “club” with a passion), but I concluded after 2 or 3 league games, that this is the best player to ever play in the Austrian league – not the best player of his age group, but generally. (Even though we had Mane, Upamecano, Minamino, etc.) As I hate the concept of what they do in Salzburg, I normally do not care which “raw diamonds” they have in their farm teams, but as soon… Read more »

We may not even be Europa League next season.

I’d be more than OK with us not being in the EL next season.

You can’t be in Champion League and Europa League.

u don’t sound snobby at all when u point out his heritage/origin has anything to do with his ability of kicking footballs. Anderlecht and Genk are known for bringin out great talents.

And you don’t sound snobby at all claiming he isn’t playing for neither of those two clubs.

He’d still be behind Tyreece John-Jules.

I watched a Belgian league game recently, and my god is it a poor league. I’m pushing 40 and I reckon I could still do a job. If we’re going after young players there’s some good English players about, Ollie Watkins for one.

DaDude
Reply to  The Spoon

Did you have any chance to watch an Arsenal game as well lately? Maybe both the Olympiakos games? The away game in which they dominated us and we scored a lucky winner? And the home game, which we lost? Missing a chance in minute 120, which I am sure even you, pushing 40, would have scored from. I am all for having a go at the smaller leagues, but maybe we should do that again after the dust has settled just a little bit following our very embarrassing exit against a team from an even weaker league than Belgium. Tell… Read more »

This kids got potential. Can play striker or just behind as an athletic driving 10 or wide on the right. Could be very useful going forward in the post Auba Laca Ozil era that is coming regardless of whether they leave this summer or not.

Strikers with first names for surnames have generally done well for us.

Camp hairdressers have Christian names for surnames too methinks,… short back and sides please!

He is quite good in Fifa, that’s all that matters

Is it just me or are your pieces getting better?

And surely we’re due a success from one of our raids in the Americas?

Snob.
Plays like Ronaldinho at same age, minus the vision.
Direct dribbling threat, works hard.
Admittedly via YouTube highlights.
Would you have rejoiced if Arsenal had signed a certain Liberian forward in the early 90s named Oppong Weah?
Being Canadian doesn’t diminish football skills, I think.

We will likely risk on a lesser known striker coming in with Auba likely gone. Martinelli aand Nketiah will get the nod with probably Laca one more season. Pepe will have thankfully Nelson as alternative right wing. Saka will be pushed forward to the left sided role up top. Then Martinelli may coninue from left ala Auba running in as a second striker so it would effectively be Nketiah and Laca (albeit they are slightly similar types). A third striker (probably we won’t have it to spend much) may come in as a hedge whether its this bloke or preferably… Read more »

Better than a surname for a first name.

I grew up in Ottawa, where Jonathan David has spent the majority of his childhood before moving to Belgium. This kid is outrageously talented, and has the work ethic to make it as a top pro. Alphonso Davies grabs headlines because he’s the most expensive MLS player ever sold, and is a great talent at Bayern Munich, but David is arguably more important for our national team. Since our head coach brought him into the fold in early 2018, he’s been scoring a goal a game (admittedly some against weak CONCACAF teams). He’s similar to Laca in the sense that… Read more »

going into the last game of the season*

Didn’t know they had a handicap system for the golden boot race. That’s quite a lead to start out with 😉

Being Canadian I don’t take offence to this, but we’ve got some kids coming up these days. That Bayern kid Davies looks alright, and this kids got a decent scoring record. And hey remember Hargreaves for the week he was healthy? Hockey is too expensive nowadays and even for upper middle lower high end class so football and soccer are where all the kids are going. Hockey is like 20000 Canadian dollareydoos if your kids is good, foot balls 200. The spacing here is on this comment section is weird.

Football and soccer are the same thing, I meant football and basketball.

I’d rather play martinelli or pepe as a sort of false9 together with 2 8.5s in CM or aka false 8s.

In 2012 we signed a late bloomer from France for 10 million as replacement for RVP and while he never quite reached that level he still turned out to be a consistent striker for us. At 33 he continues to do well at Chelsea.

You never know where you find them.

Isak! He is a proper talent I’d seriously be looking at him if auba leaves.

Without wanting to sound too snobby, a New York-born Canadian playing in Belgium could well be the most Europa League signing ever. But I guess that’s where we are these days.

Disagree Mr Allen, we need to look for young players and rough gems. Wenger always had an eye for a good player, regardless of reputation.

David is an athletic goal threat. Could replace Auba in the wide striker role.

Yeah, I dunno ’bout him.

I never trust a guy with two first names.

I don’t think “snobby” is the right pejorative… maybe imperialistic?? Would a London-born Welshman (or even a San Diego-born Mexican) playing in Belgium be applied the same stigma? Regardless, talent is talent, regardless of nationality. Egypt had very little footballing tradition to speak of, but Mo Salah is still Mo Salah.