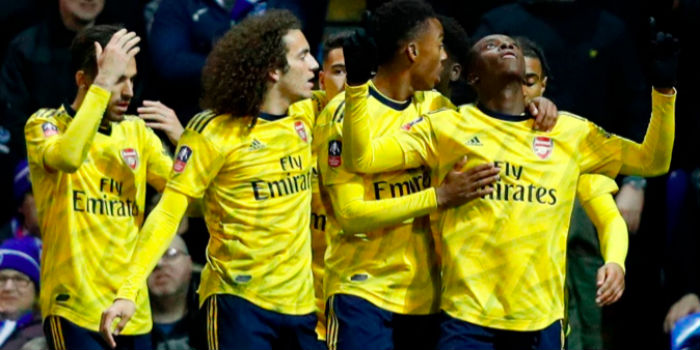 Reiss Nelson helped himself to two assists as Arsenal beat Portsmouth 2-0 at Fratton Park to secure a place in the FA Cup quarter-finals.

Sokratis and Eddie Nketiah were the willing beneficiaries of two fine crosses from the 20-year-old as Mikel Arteta’s players put Thursday’s defeat to Olympiacos behind them to keep alive hopes of a day out at Wembley.

Having played a draining 120 minutes against Olympiacos on Thursday, the boss opted to rotate heavily. Emi Martinez came in for Leno in goal, Pablo Mari was handed a debut in the centre of defence and Sokratis started at right-back. Matteo Guendouzi and Lucas Torreira anchored the midfield with Joe Willock given the Ozil role behind a youthful attacking unit; the German wasn’t in the squad. Reiss Nelson, right, and Gabriel Martinelli, left, flanked Eddie, Eddie, Eddie, who led the line.

It wasn’t a particularly pretty spectacle in the opening 45 minutes. The League One club’s fans were obviously up for the occasion and with hearty backing from the terraces, Kenny Jackett’s players put in a performance of real hustle and bustle.

As soon as the home side won possession they were quick to try their luck on the flanks. On the left wing, Marcus Harness was a particularly thorny problem for Sokratis who seemed to chase shadows for much of the opening 30 minutes. Thankfully, more often than not, the Pompey man’s end product wasn’t great.

Martinez didn’t really have a stop of note to make in the first half, but he did have to claim a few high balls and he generally swept things up well.

In contrast, to the home side’s energy, we were sluggish. In fact, despite the personnel changes, the performance was reminiscent of Thursday’s trauma-fest at the Emirates. We were ponderous in possession with our wide men too often left isolated.

It didn’t help our momentum that we were forced into an early change. A full-blooded challenge by James Bolton left Torreira in a heap and while the Uruguayan isn’t averse to the odd over the top reaction, this time you knew it was serious. He clutched his ankle, beat the turf and as soon as the medical staff arrived, they signalled for the stretcher. Dani Ceballos came on in his place.

After a relatively quiet start, Mike Dean grew into the game. Matteo Guendouzi was the first victim picking up a booking for a sarcastic reaction to three times being denied the chance to take a quick free-kick. It was ridiculous. The sooner Dean retires, the better. Cameron McGeehan soon joined the Frenchman in the book for a foul that left Willock writhing on the turf. His yellow was fully deserved.

When the camera wasn’t trained on Dean’s constant smirking, there were a couple of bright moments for us in attack. Martinelli, collecting a long diagonal ball from Sokratis, skipped past his man and tried to find Nketiah at the near post. The striker was just beaten to the punch. Not long after, Saka on the dribble managed to get off a low left foot effort. It was comfortably saved. Another half chance for Nketiah saw him snatch an effort wide.

On the right, Nelson was lively when he got the ball. A couple of times he got to the byline before crossing to nobody in particular. It turns out, practice makes perfect. Deep into stoppage time, the England under-21 delivered a ball of real quality to the near post for Sokratis, up for a corner that had initially been cleared, to crash home a volley. It was a lovely finish from the Greek who enjoyed his moment in front of the travelling fans. (1-0)

Six minutes after the break Nelson helped himself to a second assist. A lovely dart down the right freed space for him to whip in a cross to Nketiah who, at the second time of asking, squeezed the ball past the keeper at the near post. It was a tidy finish. (2-0)

The goal took the sting out of things on the pitch and in the stands. In between Willock heading wide and Saka forcing keeper Alex Bass to tip over – a period of 30 minutes or so – I hit Wikipedia. It turns out Admiral Nelson’s HMS Victory, the flagship at the Battle of Trafalgar in 1805, is preserved in Portsmouth. If only this report required a tabloid-style headline, I’d have a field day.

Having only lost once in 26 games at home this season, the home fans might have expected a bit more from their boys. Instead, we continued to keep them at arm’s length. Pablo Mari came through his first game with his reputation intact. He seems to read the game well and his passing was tidy.

In the final five minutes, Cannon did take advantage of a momentary Gunners lapse to fire goalwards…but it was nothing more than a shot across the bow. Wahey!

After last week’s trauma, this was a welcome win and clean sheet. Kudos to the youngsters for getting the job done with minimal fuss. We’ll find out who our next opponents are on Wednesday evening. Our attention returns to the league and a home fixture against West Ham.

Happy result but Mike Dean is a disgrace to the human species.

Reis Nelson finally understamds what a winger does. Pepe should take note and go watch how he created the 2nd goal for Nketiah. He basically took the ball and instead of passing backwards which was what he was doing all first half. He decided to run at his marker beat him and put in a good cross. That’s what wingers are supposed to do. Not pass backwards all the time and twist and turn and twist and turn until the opportunity goes like Pepe did. Hope he’s watching Nelson is back and fit I hope there’s a real competition now… Read more »

This was a 3rd division side. Arteta sees Pepe and Reiss in training and should have a good handle on who deserves to start

If we had a #10 that could score goals it would immensely help Pepe too. Ozil doesn’t do enough off the ball and he simply isn’t a goal threat so Pepe is constantly double-teamed. We need to create more inside threat to draw attention away from Pepe. He is still dangerous but teams just throw multiple bodies at him in an attempt to nulify him.

Relax, Pepe is a left footed inverted right winger, which means he’ll invariably have to cut into his marker attempt a dribble before putting in a cross rather than knocking past his man and crossing directly.
But he does need more simplicity to be more efficient

The horror when someone walks into Mike Dean’s changing room and just finds a limp human suit with a zip running down it with a lizard’s tale protruding from the shower. “Mike?”

Mike Dean is a w.nker , he wears a w.nkers hat, and when he saw the limelight, he said i’m grabbing that

… he didn’t go for showbiz, or music cause that’s shite,
he wants to screw the Arsenal, the f**king parasite.

I stand corrected. You are, on reflection, completely accurate in your assessment.

Nelson looking dangerous, first half was sluggish but 2nd half was the identity we are looking for. I really don’t know what’s going on with Willock (on the pitch) and with AMN (off the pitch, so much that the lad gets subbed in at injury time..)

Good result and a shout-out to Nelson his assists. Hope Torreir’s injury isn’t too serious.

*for his assists
*Torreira

Willock should be loaned

I liked the look of Pablo Mari. Composed defender,we don’t have many of them.
Nelson has a great turn of pace and quick feet, he just needs to take a moment to compose himself.
Hope Saka doesn’t get burned out being played so much.
All the swearing and gesturing at the ref and Guendouzi gets a card for putting the ball down. Geez Mike Dean is a knob.

I really don’t like the lack of urgency. But better second half.

Lacazette doesn’t start and we win a match?
As expected

Auba not even in the Squad and we win a match?
AS EXPECTED.

Rubbish game but a decent result. We were pants in the first half but much better after the break. That goal by Sokratis was quality and the highlight of the match. Apart from that it was an utterly forgettable event. The kids still have a long way to go: some frustrating play by all of them. We’ll need to up our game in the next round if we are to make it to Wembley. BTW: it’s depressing that even a League 1 team like Portsmouth are resting players in FA Cup ties. Remember when the FA Cup was the most… Read more »

Remember when footballs were made out of pigskin?

I don’t think the kids will be playing the next round, it’ll be a near strongest line-up from here on in.

It is still a coveted trophy as shown by the fact that with the odd exception its always on by a top 6 club. It is still considered a major trophy.

Jermaine Jenas praising that tackle on Torreira and then saying we didn’t deserve to be winning. What a toad that man is.

I assume you misspelled turd.

Disappointed to hear that. He’s normally alright. But now he can fuck himself. The spud cunt!

The way the man described he first half, you wouldn’t have believed that Portsmouth had the grand total of zero efforts on target.

I don’t understand why so many pundits like to put Arsenal down. I get it Arsenal didn’t play well but come on the gap between two teams was visible. Portsmouth could barely put a decent chance together.

Guendouzi gone even further up in my estimation for pissing off the biggest cock in the land. Nelson looked rapid and quite solid in most of the game and Mari looked very solid.
Saka looked so jaded, though. The poor kid is clearly in desperate need of a rest.

Yeah I thought ANN would get a run out to save Saka’s legs. The only thing I can think it’s Arteta wants him to get all the playing time he can to maximise his development.

Upon reading that, I snorted loud enough to startle my dog. Well done, Andrew!

Usually don’t like it when our players pick up stupid yellows but if there was ever a worthwhile one, it was Guendouzi’s tonight. I’m still chuckling now. Hope that made Dean feel like the utter tit he is.

Not a great first half, but nice and controlled in the second. Mari looked solid too, which is a positive. Roll on West Ham.

Mike Dean is a w.nker , he wears a w.nkers hat, and when he saw the limelight, he said i’m grabbing that…full permission given to use this every time he refs an Arsenal game….or to be fair any game

Probably not popular but I thought we were poor tonight.

I only turned on when I got in for the second half and we absolutely dominated though were sloppy with the final ball as there were at least a couple of decent opportunities for a third of decision making had been better/quicker. But it was solid game management.