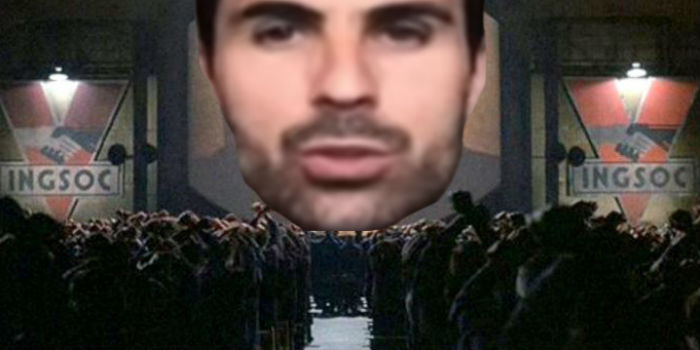 Mikel Arteta says the Arsenal first team can’t escape the homework he’s been setting them because he gets notified when they’ve downloaded the files his coaching staff send out.

Eager to make the most of the lockdown, the Spaniard has been holding meetings with his squad on both an individual and collective basis over the last month.

Having joined the club as head coach less than four months ago, he’s been using the video calls to get to know the players on a personal level, to help thrash out a wage cut agreement and to test and improve their tactical understanding of the game.

In his latest interview with Arsenal.com, Arteta opened up on the type of tasks he’s been setting his stars and why he believes it’s important for them to take it seriously.

“We have to try to use this time, as I mentioned before, to try to get to know each other as well, but we have to develop professionally,” he said.

“There are a few aspects that I want to improve, change or develop, and individually they are different for each other.

“So I put a plan for each player of the areas that we believe they can improve in, but as well, bringing confidence to all the things that they do right, that they have to try to maintain and keep, that are really relevant for the team and the way we play.

“And to make an emphasis as well on the way we behave, maintain our culture and make sure we are looking after the people around us that we really care about, who we are working with, and make them realise as well how lucky we are to work in the environment and the world and the context that we are all in on a daily basis.”

It sounds like the process is proving positive for all parties. The boss has been impressed with the application of his players, particularly the youngsters, and joked that he has technology on his side when it comes to ensuring they do what is asked.

“I like to dissect the game in different aspects. But we’re going through individually with them on those three big aspects but then we are putting each together and we are putting parts of games for the players to analyse individually.

“After that, they have to find the solution, they have to tell what they did wrong or right and why this scenario happened and if they could have avoided that before it actually happened.

“A lot of times it’s just about communication, but other times it’s about the positioning, it’s about the body shape, the technique of how they have to defend. It’s a lot of things and the feedback has been really good.

“And after, the way they have been processing the information for the next one, has been superb. And with some of the young players, I’ve been very, very impressed with them.

“With the technology, we know when a player has downloaded the game, when he has done the homework. They have to report everything to me! So they cannot escape. And to be fair, they’ve been really good. They’ve been doing their tasks in the way we ask them to do and in that sense we have no concerns.”

Never thought I’d be happy and impressed with someone saying, “Do your homework!”

I like to think his emphasis on tactics and accountability now will give us a leg up on the less tactically astute managers. I struggle to imagine Jose, Lampard, and Ole doing this in an equally effective way.

Ya Gooner
Reply to  Burr

Agree about the others but Lampard is surprisingly intelligent. I remember reading somewhere he scored quite highly on an iq test. Could be bullshit mind you and fuck giving the chavs any credit so ignore this comment

I would take Gabriel Jesus, but you can keep Victor Moses, and we already tried Mohammed Elneny.

I’ll have whatever he’s smoking….

Great leadership from Mikel. He certainly seems a central reference point for the staff.

im reeaaallllly hard to convince but i trust mikel. i would do a surgery to get a extra nippel to put 29% more backspin on my free kicks if he tells me it would work.

Just reading premier league could restart on June 8 but behind closed doors. Sorry as much as I want the games completed ,without any fans present just doesn’t make it feel right.Football is about fans without supporters in the grounds games are meaningless so just scrap the season.

Games behind closed doors isn’t ideal, but we’re not in an ideal world right now. I’d rather we could finish the season and have a good go at the european places and Aubas golden boot than just abandon everything. As long as the players are safe I’d rather watch on TV than nothing.

Seriously restarting games in empty stadiums just to see if Aubameyang gets the golden boot.Absolutely bottom of my list of priorities regarding the team going forward.Really interested on everyone’s take on this regarding restarting the premier league.i love my football as much as the next fan but semifinals, finals,playoff finals without fans in the stadiums let alone a north London derby still to be played leaves me feeling empty inside. Clubs want season played out for tv money nothing else except if you’re a Liverpool fan obviously.

Totally disagree! I absolutely would love to have games played in front of full houses, but that’s not possible right now. Given the choice between no football and football under less than perfect conditions, I’d always take the latter. This team will blossom under Arteta – but they need game time.

Timorous Me
Reply to  Marco

It would be far from ideal to restart without fans, but from what medical experts are saying, it’s unlikely we’ll be able to have fans at games for a long time–maybe two years.

I don’t want to wait that long to watch another game, so fine, play behind closed doors until a vaccine is found and distributed widely and, we can only hope, working well.

Question1. The opposition have just scored do you 1. Look around for someone else to blame. 2. Realise that sliding in your arse wasn’t the best option. 3 Give officials sad dog eyes. 4 Pray for VAR screen to pop into life. 5 All of the above

Imagine this lock down with Unai as manager.

Imagine if Unai is your kid’s teacher. He will force you to watch himself talking enlessly over Google classroom.