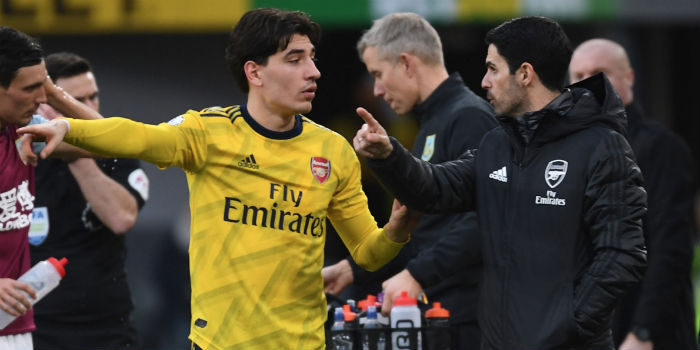 According to various reports, Arsenal’s players are set to become the first in the Premier League to accept a wage cut following negotiations with the club’s hierarchy on Wednesday evening.

It is reported that head coach Mikel Arteta and PFA representative Hector Bellerin played important roles in persuading the first team to sign-off on 12.5% cut that will last for 12 months.

According to the Mirror, there are a number of performance-related clauses in the deal which could lead to the players being fully reimbursed in the future.

Earlier this week, Arsenal confirmed that the executive committee – believed to be as many as 14 members of staff – had taken 33% wage cuts for the next 12 months. The club also said they were not planning on making any redundancies and would be paying casual workers up until the end of May.

In addition to the arrangement with players, reports have surfaced this week that Stan Kroenke has guaranteed to pump millions of pounds into the club to take the edge off the financial repercussions of the ongoing coronavirus situation.

It seems unlikely that we’ll get official confirmation of any such arrangement but if true, it’s a welcome and timely proactive step on the part of our billionaire owner.

While the process has played out in the media and hasn’t been the smoothest – perhaps forgivable given the PFA’s stance on player wage cuts, the idiosyncrasies in player contracts and the logistical challenges posed by the current environment – it’s positive that a deal has been thrashed out.

Hopefully, player relationships with each other, the coaching staff and the board haven’t been too strained during this period. Here’s hoping they are able to get back to focusing on football soon.

This is good news – once again, our club and players acting with class and in line with our club traditions. Up gunners.
P.S. I miss football

Agree, its perfect that Arsenal are the first Premier League club to sort this out with the players, management and backroom staff as well.

Compare that with the likes of Tots putting their staff on furlough, with tax payers support!

Seems like a fair deal. Now bring back football (when safe to do so), I miss it so much!

If Arsenal qualify and win the 2020/21 Champions League? Am I reading that correct? Surely the fact that we’ve not qualified for the last 3 years and we’re looking the win it next year? That is one of the most ridiculous bonus clauses, I’ve ever seen. You might as well say 10 million.

Anything is possible to those who truly believe. He who dares, wins.

Only 10 million?
How about a hundred squillion trillion?

Please let’s football games come back. Life without football intrigues, suspense and adreline is so boring. Please God take away Covid-19 and let life return back to normal.

Ya Gooner
Reply to  Charles

I quite like this forced societal down time. I’ve connected more with my interests and my families interest. I’m exploring creative a avenues I haven’t explored in years and am really enjoying it. I hope things never return to ‘normal’ in that sense. As long as our families are safe.

A special appreciation of the pivotal role played by Arteta to get this lofty commitments from the players by leading by example. He has already shown his leadership skills before now, but has taken it a notch up in doing this. Most other coaches with such little experience in the field will shy away from such responsibility to avoid any backlash or fallout, but not Arteta. This clearly marks him out and tells a lot about his quality and personality. I was very hopeful before now, and now I am optimistically more sure than hopeful. Like good wine, let THIS… Read more »

I screenshot that because it expresses my feelings about the man who properly took over from Arsene. No diss to Emery, but Arteta is right now holding Arsenal’s like an ember.

Emery finished 5th and took us to a Europa league final. I like Arteta and think he needs time,but this honeymoon period with the fans seems unlikely to last. We’re really not a very good team, our squad lacks quality, anything resembling dynamism, and no goal threat from midfield If you take out Aubameyang’s goals? I think we’re genuine bottom half of the table scrappers, without any scrappers. If Kroenke doesn’t invest? And we fail to qualify for Europe altogether? Next season will just be a bottom half of the table slog, from a group of players that are average… Read more »

Well done to all, including Stan Kroenke if true.

Well done lads, the execs, the coach, players, everyone.

I wonder who had a word with Stan Kroenke?

I think he’s a guy that runs an organization, several organizations. So he’s quite good at pulling the reins from high up. And these companies work with budgets. And I think if you go check on his budgets he’s always delivered according to the Administrators he’s placed. So maybe evolution has favorited him and he now has the best sensible people running his supply chain (I’m looking at you Mikel, Bfg, Sly Spanish ceo, Vinai etc). We all love sensible people on our and other’s supplychains because the world has less chaos when everything is sensible. But so many little… Read more »

Arsenal lead the way. Well done. This was the right move

Good news that it seems to have come to an agreeable resolution. The winning the champions league bonus may as well be 5million per player

A refreshing outbreak of pragmatism and common sense – nice to see and well done to all involved.

This is what they should have put instead of the useless Champions Leauge clause. Players will get full refund for salaries plus additional 1 million if: 1. Play well for 90 minutes, not 45 min. 2. Don’t give away the ball when you are under no pressure from the opponent. 3. Don’t give away stupid penalties 4. Don’t give away silly yellow and red cards. 5. Dint tell yours fans to fk off 6. Be proud for playing at Arsenal 7. If you plan to leave in the summer then just go now and don’t waste our time. 8. Shave… Read more »

Mr Negative strikes again. Cannot even acknowledge the improvement they have made under Arteta. Just sees the worst

Get a life you sad old man. You are embarrassing. I am really starting to feel sorry for you. Seriously get a life

It’s you that needs a life. Total negativity with every comment you make. At least it always appears that most people agree with me judging by the thumbs down you always get We all know there’s work to be done to take us to the next level but at least there light at the end of the tunnel. I’m sure David Luiz will improve immensely with a hair cut. ???

Over on the main page for today, Blogs writes “…that the two things are very much mutually exclusive.” Well, clearly they are not mutually exclusive. Here, a quick example: KSE injects cash into the club to pay costs that cannot be paid due to severe drop in monthly or other regular revenue (e.g., support staff, trainers, custodians, grounds keepers). Players take pay cut to their wages, when they are not playing football (even though they are paid to, ahem … play football) and when the club and its moddle are suffering financially to show solidarity with the club, show that… Read more »

I think Blog’s point is he wanted Stan to just inject more cash into the club in the form of equity that would never be repaid. Stan probably had to personally guarantee loans as he did with our transfer spend last year which means if there is a short fall he’s personally on the hook for it. That means that if Arsenal ever went bankrupt not only would he lose his equity investment of over $1 billion he would owe the bank whatever he guaranteed.

To be clear are you saying blogs wanted

B – money in like Roman a. At Chelsea, he can ask for his zero percent loan back at any time ?

C- like Glazers at utd, take out another huge loan debt on club?

But Stan or kse have actually gone for C ?

Or am I half asleep……

As what you suggest in last sentence would be bad business from his point if view Nd unrealistic, who is his lawyers or accounting team would never let him make such a risky move

I don’t really see the point in constantly complaining that Kroenke forces Arsenal to be self sustaining.

Not complaining I asked some one which it a ,b, c or non of above it is Stan is doing with the extra revenue.
I don’t boo players or managers or owners.in. Stadium. Just want to know clearly what is happening.

It’s highly likely he personally guaranteed a loan similarly to how we paid for transfers last year. That allows us to get a loan at a much better rate. That is very different from what the glaciers have done as they have done a lbo & have paid themselves several hundred million in dividends during the time they’ve owned Man U. Kroenke on the other hand simply bought equity in the club and has just left it to be self sustaining

A P
Reply to  Homer

I agree. The standard of journalism on this blog has declined as the authors inject their disdain for Stan more obviously than ever.

Really positive news on all counts.